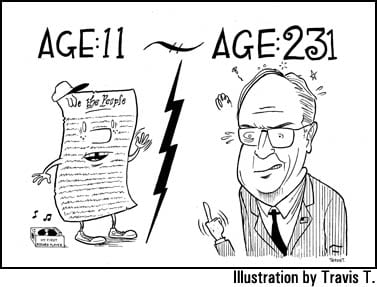 King George in Decline: The Misadventures of an Aging Prep-School Cheerleader: Volume 3: Kucinich and the King’s Henchmen

On June 9, Representative Dennis Kucinich (D., Ohio) continued his battle against the Bush administration. Undeterred by the opposition of his party’s leadership, the congressman presented articles of impeachment against President Bush. (He introduced a resolution to impeach Vice President Cheney last year.) Restricting his resolution to thirty-five articles must have been a challenge, but Kucinich hit the key points. Article 1 accuses Bush of “creating a secret propaganda campaign to manufacture a false case for war against Iraq.” Article 24 deals with “spying on American citizens, without a court-ordered warrant, in violation of the law and the Fourth Amendment.” The GOP’s misuse of the Justice Department and efforts at vote suppression are covered in Articles 28 and 29.

The House is not expected to take action on Kucinich’s impeachment proposal, but new evidence keeps confirming that the Ohio congressman is right. On June 26, a subcommittee of the House Judiciary Committee questioned John Yoo, a former Justice Department counsel, and David Addington, formerly Cheney’s legal adviser, about their roles in creating the administration’s policy on torture. “Secretly authorizing and encouraging the use of torture” is the way Kucinich put it in Article 18 of his resolution, and the hearing left little doubt that Bush and his advisers are guilty of just that.

Congressman John Conyers (D., Michigan) asked Yoo if there were any legal limits to the president’s ability to authorize torture.

Is he allowed to do it or isn’t he? Isn’t the law designed to prevent actions society deems harmful, even if it’s difficult to see why anyone would want to do such a thing? Luckily, the authors of the penal code didn’t take Yoo’s approach and say, “Gee, we can’t imagine why someone would want to commit murder, so we don’t need to think about preventing it.”

As embarrassing as it was, Yoo’s performance at the hearing paled in comparison to that of his partner in crime, David Addington. After serving as legal adviser to Cheney, Addington took over as the vice president’s chief of staff in 2005, when Scooter Libby resigned to concentrate on his new job as Bush’s official fall guy. Addington’s sneering and stonewalling offered a vivid picture of this administration in its natural state.

When asked whether he encouraged torture during a visit to the detention camp at GuantánamoBay, Cheney’s chief of staff followed the standard practice of Bush flunkies and said that he couldn’t recall. To his credit, however, Addington tried to include some variety in his non-answers, unlike Bush’s former attorney general, Alberto Gonzalez, who set a new indoor amnesia record during his appearances before congressional committees. For instance, Addington used this excuse: “I can’t talk to you. Al Qaeda may watch C-SPAN (the network that broadcasts Congress live).”

The Bushites’ claim that they can’t answer questions because of national security expired when they revealed the identity of a CIA agent, Valerie Plame, as part of a political vendetta against her husband.[i] They didn’t care that they might expose an entire network of intelligence operatives to our nation’s enemies. So it’s a little late for administration officials to pretend that their secrecy is motivated by concern for security rather than a desire to conceal their misdeeds.

Besides, I’m not sure that al Qaeda members watch C-SPAN. Oh, they probably mean to check it out, but while surfing the dial they get distracted by news footage of Iraq. By the time they finish laughing their asses off at the fact that Bush and Cheney were stupid enough to order an invasion of that country, they’ve likely forgotten all about watching the latest subcommittee hearing.

Another highlight of this hearing was an exchange between Rep. Steven Cohen (D., Tennessee) and Addington, concerning the latter’s crackpot theory about the vice presidency. Addington conveniently believes that the vice president is neither a member of the executive branch nor the legislative branch, and is therefore subject to the rules of neither. (For more on that, see my last column here.)

Cohen: But (the vice president is) attached to the legislative branch?
Addington: That’s the quote I read you.
Cohen: So, he’s kind of a barnacle.
Addington: No . . . I don’t consider the Constitution a barnacle.

That’s quite a revealing mistake. The vice president’s chief of staff apparently can’t tell the difference between Dick Cheney and the Constitution of the United States. It makes you wonder whether Cheney struts around the VP’s office dressed as King Louis XIV, proclaiming “I am the state” like old Lou did back in the day. Since conservative Christians haven’t figured out that Bush isn’t Christ’s representative on earth, I guess it’s not surprising that GOP functionaries think Cheney is the law of the land. So I’ve provided this handy comparison in hopes of clearing up Addington’s confusion.

Even with such help, there’s no hope for Addington. You can’t teach an old, monarchist lap dog new, democratic tricks. What we can do is make clear that the actions of the Bush-Cheney regime are unacceptable under our system of government. That’s why there’s impeachment. Members of Congress seem to need the people to remind them of that fact.

[1] The administration leaked Plame’s identity in order to retaliate against her husband, Joseph Wilson. Wilson had exposed one of the administration’s lies about Iraq and nuclear weapons. After being convicted of perjury and obstruction of justice during the leak investigation, Scooter Libby received a pardon from President Bush and is now in the process of living happily ever after.