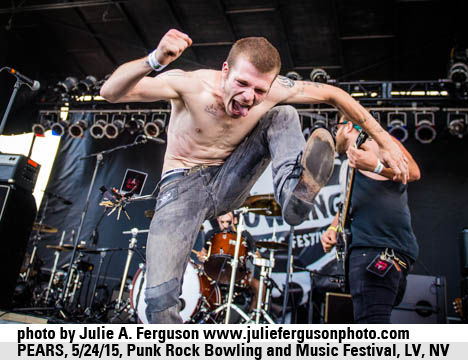 I had the opportunity to be a part of the photo team for Punk Rock Bowling this year, a festival I had wanted to attend for years. When I was accepted as a photographer I bought my last-minute flight, found folks to stay with, and tried not to stress about all the money I was spending because the experience was going to be worth it... (It was!)

The house I stayed at my first night was hosting a BBQ/pool party/house show on Saturday afternoon. Last minute decisions were made and it was announced that PEARS were playing the party! This made my day and probably my weekend. I only got to see them play once before and they blew my mind. Their mix of hardcore and pop punk combined with the nonstop dancing of their vocalist appealed to both my musical taste and my photographer’s eye. It was quite a treat to see them play in this setting; feeling the Las Vegas heat, smelling the smoke from the grill, and drinking rum from pineapples with friends both old and new. I couldn’t have asked for a better afternoon.

On Sunday they played the main festival stage. Although it was quite the opposite of a small backyard barbecue, they played another incredible set with a couple hundred punks dancing and sweating on the hot asphalt.

Monday night after the festival ended I was sunbaked and exhausted, but still not ready to end one of the best weekends of the year. I headed to the Double Down Saloon for an after party where thousands of photos later, I ended my first PRB experience watching, you guessed it: PEARS!