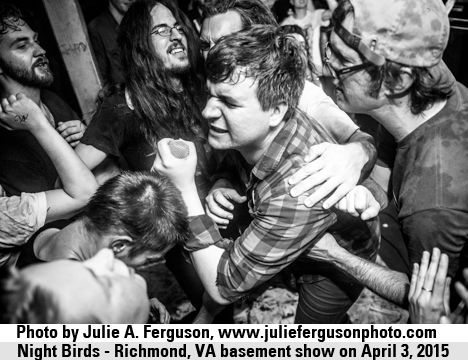 In April I had the chance to see New Jersey’s, Night Birds play a basement show here in Richmond, Virginia. This was a show I was looking forward to for months. I had seen and photographed Night Birds a couple times before, but in much larger venues. Aside from liking their music, they quickly became one of my favorite bands to photograph because their energy is non-stop. I was really excited for the chance to shoot them in a more intimate setting.

I arrived a little late and pulling up to the front of the house you wouldn’t expect there to be a punk show happening. However, walking around the back I was hit with a huge crowd of people hanging out around a bonfire, smoking, chatting, and drinking in between sets. During the show the basement was packed. Bodies, booze, and sweat were flying. Everyone was screaming and dancing along. The night was a blast and kicked off springtime in Richmond in the best possible way.