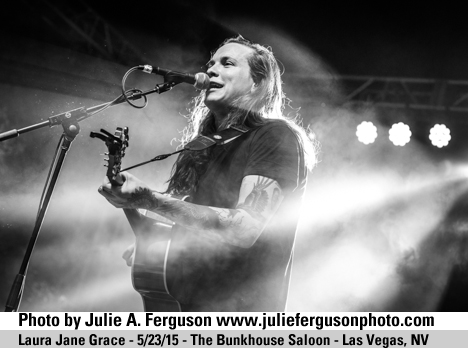 When I went to Punk Rock Bowling in Las Vegas this past year, I was really excited for the nightly club shows in addition to the festival itself. Laura Jane Grace closed out Saturday night by playing an acoustic set with Frank Turner.

Seeing Laura perform after a long, hot day couldn’t have been better. I grew into quite a feisty teenager as I discovered punk music. I loved Against Me! As I changed and grew so did their music, making me feel like we all kind of evolved together. Even though I’ve seen Against Me! play many times before, this would be the first time I have ever gotten to photograph, so I was extra excited that night.

The show was at the outdoor stage at the Bunkhouse Saloon and the crowd filed in, packing out the dusty lot. Laura played with so much energy, but the set seemed a little more relaxed than a normal Against Me! set. Even though it was a big crowd, it felt more personal. Accompanied by Against Me!’s drummer Atom Willard, they played songs off their newest album along with some old favorites. Laura poured her heart out on stage as me and the rest of the crowd sang along until the last note. We ended the night with full hearts and for me, a full memory card.