Jucifer: The Web-only Interview by Kat Jetson and Harmonee

(Please note: Yes, we are aware that Jucifer was interviewed in issue #8 of Razorcake. No, this is not the same interview. As a matter of fact this is the other half of it. There is no overlap. Even the pictures are 100% web exclusive. Enjoy. -Todd Taylor) 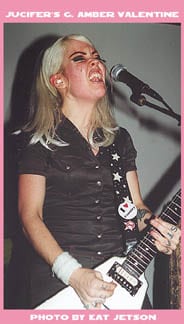 One half of Jucifer's sonic-boom sound, Ed Livengood, unfortunately couldn't join us. He was busy loading thirteen or so of their megawatt amps into the couple's home at the moment, the Winnebego. So, his platinum-locked, platform-boot wearing, flying-V wielding goddess counterpart graciously endured our relentless Q and A. Occasionally, their pooch, who's name is escaping me at the moment, would walk on by and say hello in that perfect "head tilted to the side" way. You may be saying, "That's nice, Kat, but what about the music?" Well, dear reader, the Jucifer sound is an explosive and beautiful onslaught of blistering guitar riffs, gorgeous harmonies, and thunderous drum beats. The music is FIERCE! The creators are sweethearts - charming Southern types. Jucifer and their music defy categorization. I dunno what else to say 'cept, me and Harmonee heart Jucifer.

Interview by Harmonee and Kat Jetson
All photos by Kat Jetson

Kat: I have to say that tonight was fantastic.
Amber: I don't like to look up usually (while playing). There are certain songs I feel like looking up in and interacting. The rest of them I don't or I have my eyes closed and at one point I looked up and was like, "Whoa!"
Kat: It's great to see people practically in disbelief that they're smiling.
Amber: It's the best to feel that way. I just saw Mothers Finest. I don't even know if you know of them. They are an old '70s band. They were opening for the B52s. Mothers Finest was one of the best bands I've seen, ever. They're this weird mixture of funk and rock and normally I would hate that combination, or any modern version of it, but they were incredible. These people are in their fifties and they were the shit. The lead singer woman, probably in her fifties, was wearing a lace, sheer body stocking with thong underwear and completely pulling it off. She was amazing. I was totally looking around going, "Yeah! Yeah! People are into it." It's a great feeling.
Kat: And they (Zen Sushi, the venue) didn't shut you down.
Amber: No. Apparently the bouncer guy was trying to make us end. He came and flashed his flashlight on me but I just thought it was the light show. I didn't even know what was happening. Someone told me about this afterwards. Then he went running up to the sound booth, flashing his light and telling everyone we had to stop and right as he was really beginning to freak out we were done.
Kat: Glorious
Amber: Isn't that beautiful?
Kat: My friend, Frank, wanted me to ask have there been any Michael Stipe sightings lately?
Amber: I think he has inside information. Michael did band photography for us recently so that's the scoop on that.
Kat: [Kat notices and points to a giant box of cereal on the floor of the Winnebago]. I love Honey Nut Cheerios. I actually buy the double box of Honey Nut Cheerios myself in big bulk. Anything that's honey nut.
Amber: This is my first double box because for some reason they don't happen to have those around where we live. Everything is a lot more expensive here, by the way, at the grocery store. Wow, like six bucks for a gallon of orange juice?
Harmonee: How much do you normally pay for it?
Amber: Three fifty.
Kat: We're steep here. They think we're like made of money. It's not true.
Amber: It's frightening. 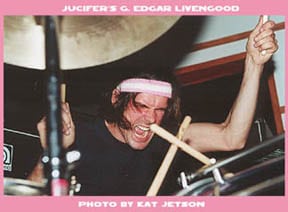 Kat: When I saw you last year, I don't think you played anything off of your first album (Calling All Cars on the Vegas Strip). You played just a whole bunch of new stuff, and you still don't really.
Amber: The very first song we opened with tonight and we opened with last night as well, was on the album. I think there's a couple.
Kat: Really? It must just sound so heavily distorted to me. I know the album.
Harmonee: It's really hard to hear vocals, so I think that has a lot to do with it, too.
Amber: Maybe that's it. One thing we're trying to do on this tour is play a lot of the Lambs EP because we figure people just got it and the EP is, for the most part, stuff that comes across almost exactly the same way live as it does on the record, so it's nice to be able to do that. We get bored if don't play new stuff so we're playing some stuff from I Name You Destroyer and on some of the shows we've played a song that's gonna be probably on the next record. We haven't played them here because they involve both of us singing and the PA's are just not good and plus I'm sick and whatever so we just kind of scrapped that one until we get back into better PA land. [laughs]
Harmonee: What is the most tracks ever laid down for a song you've recorded?
Amber: I Name You Destroyer was great because we had a budget. Both the first record and the EP were done with no money. Finally, we could afford to use real good tape and take our time and track and track and track. I think, with studio magic, we used something like thirty-nine tracks on a couple of the songs on that album. It's great, it's fun. We get to play with ourselves. It's awesome.
[Girly giggles]
Harmonee: There's the name of the interview right there: "Musical Masturbation with Jucifer."
Amber: I did a phone interview with this really cool guy in Seattle. He asked me a some question and I was talking about our music and I said, "We're goofy but relevant" and I thought oh god! You're going to use that as a caption aren't you? Please don't use that as a caption, and then he put it as the caption but he included me saying that in the interview. It was so funny.
Harmonee: This question might be the obvious question, but how did you come up with the name Jucifer? Or what does it stand for if anything?
Amber: It is not permissible for me to discuss. Classified information.
Harmonee: Alright. That's a fine answer.
Amber: You guys have a lot of questions.
Harmonee: We like you a lot.
Kat: You're listed in I Name You Destroyer as G. Edgar Livengood and G. Amber Valentine. I wanted to know what the G stands for.
Amber: Gangsta.
Kat: Gangsta! You know, that was not in any of the things I read.
Amber: I'm giving you an exclusive.
Kat: How could I know that bit of information because so many people put in parenthesis, "We don't know what the 'G' stands for."
Amber: Now you know, but you shouldn't tell. You're doing this to keep just for your personal information, right?
Kat: That's right.
Harmonee: Do you not want us to include that in the interview? We can take that out if you want. We can make subtle hints if you want.
Amber: Yeah, there you go. Skirt the issue.
Kat: On the song, "Malibu," you're singing in French a little bit. Do you know French?
Amber: I know enough French to write the lyrics.
Kat: I'm curious what you're saying 'cause I took French and I don't remember diddly.
Harmonee: Which is more than I know.
Amber: I don't remember very much. I can sort of read French but I can't converse in French and I can't think of how those lyrics go right this second. There's both snow and ice cream in that song too.
All: [Laughing]
Kat: I picked up your EP yesterday and after listening to it a gazillion times, the first song is like four songs, basically. I was wondering if you had originally intended it to be. Did those four songs each have titles and they were their own separate songs and you thought, "Oh, these sound good together," like you played them live once and you just made it a one song thing? Or did you purposely know you wanted to write one song that's four parts?
Amber: Both. Lambs was originally our road crew, one of whom is now not here anymore, but they're brothers and they both worked at a college radio station in Athens. They actually reminded us of how Lambs was started because we kind of forgot, but we wrote it to do a thirty minute radio performance. Instead of playing a set, we wanted to play a brand new thirty minute music piece. We ended up trading out a couple parts that were in that original version for different things that wound up on the EP. The first Lambs track, I had written the introductory part, and we were getting ready to practice it and we started playing it and then we just went into the rest of it and the way it is on the record is the way that it was the first time we jammed on it. A lot of times that happens with us. It's this great feeling. We look at each other like, "I can't believe we did that!" It's unreal. It's one of the coolest feelings.
Harmonee: Do you record everything when you jam? Or how do you remember doing all that? 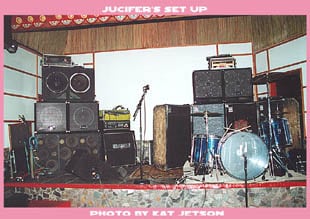