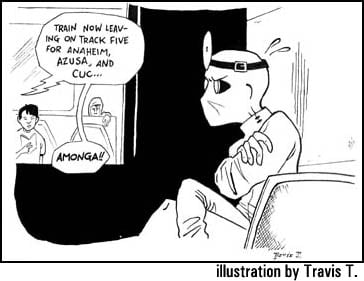 Johnny Carson, Jack Benny, and Bugs Bunny All Made Fun of It: Doctor Strange's Fourth Column

Dr. Strange here with another slice of my life. Maybe this will interest you.

A couple weeks ago, while working in the record store I own, I noticed a flyer that someone had posted on the bulletin board. It said that our great and fearless leader George Bush was actually coming to my little town of Cucamonga. Yes, the same town that many celebrities—including Johnny Carson, Jack Benny, and Bugs Bunny—have all made fun of. I couldn’t believe it! I kept thinking this had to be a joke. Why would he come here? And more importantly, why would anyone let him in? He was going to be speaking literally less than half a mile from our house.

Just so you know where I’m coming from, I haven’t despised a President this much since Ronnie Raygun. And it’s not only because of the war in Iraq. This guy simply cannot manage any business, let alone an entire country. I’ll let the facts speak loud and clear for themselves.

Of course there was a protest scheduled, so my wife and I decided to go check it out. To my amazement, there were actually a lot of people there. On both sides. That kind of bummed me out to see pro-Bush supporters, but it also made me feel good as well. Why? Because it typifies what this country is all about: people being allowed to voice what they feel without fear of being put in prison. There were all types there, trust me. I actually overheard one nutjob standing in front of us speaking to his friend while pointing to the “anti-Bush” side saying, “You’re going to see the devil come out over there.” I couldn’t believe it. What the fuck? I then noticed he was holding a bible as well. He was like a character you’d see in a bad B-movie who you would think could never really exist. But he did and I saw him! Unbelievable…

I left the protest feeling saddened and proud of our country all at the same time. My view is that as long as you have passion for your beliefs, you should stand up and be heard. Just because I, and others, may strongly disagree with them means nothing. Trust me. They think I’m out of my mind as well. I think and hope we all want what’s best for the country and the world. It’s just that there are different views on how to get there.

Okay, I still have some room to fill up and I can’t think of anything else, so I will tell you, briefly, about a release out on Dr. Strange Records. Black Market Baby! One of the early D.C. bands. This will be a discography featuring twenty-six songs with liner notes from John Stabb (Government Issue) and Mastered by Tom Lyle (Government Issue). I’ve also been able to get some words of endorsement from Henry Rollins and Ian MacKaye.

“Black Market Baby were a great band and enormously important to many in the early D.C. punk scene” –Ian MacKaye

“I’d forgotten how damn good Black Market Baby was. I used to see them play all the time in D.C. and they were always great. This CD really proves it. This is what reissues and labels like Dr. Strange are all about. Nice one.” –Henry Rollins

Sorry for the shameless plug. I had nothing else to write about!

Check out some songs and the cover art at: http://www.drstrange.com/

Until next time my friends!