Every year, Punk Rock Joel gets to celebrate his birthday by picking his favorite bands to play at Gilman St. It’s usually one of the funnest shows of the year and if you can’t tell already by the line-up, Joel’s got pretty good taste in music.

The first band up was Tulsa. Formed in Tulsa, OK and currently residing in San Francisco, this band plays excellent thrashy pop punk from the heartland of America but with a strong (really, really strong) Bay Area feel to it. 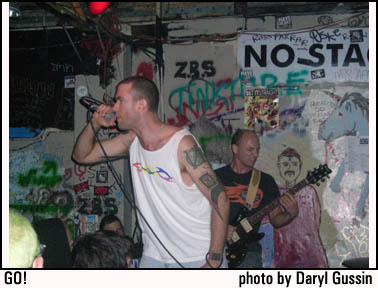 The next band was GO!, from New York City. They were on a reunion tour after being out of commission since 1991. During their set, the lead singer mentioned that the last time they played at Gilman was in 1990. Pretty cool. GO! plays ultra-posicore to the extreme, which is fucking fine with me. I don’t know how anyone can really refer to hardcore as a youth movement with the amount of older men and women who are still active in the scene. Some of the most popular hardcore shows of the last year were Gorilla Biscuits and Lifetime, and with bands like Kill Your Idols and 7 Seconds still releasing albums, it seems that older dudes still got some ‘core pumping in their hearts. 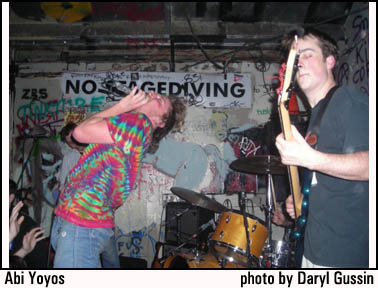 The next band was the Abi Yoyos. This band is one of my favorite bands in the world right now. And seeing them play at Gilman St. is by far my favorite places to see them play. As usual, they played an amazing show and everybody in the crowd seemed to know every lyric of every song. Last year, they released a full-length (Mill Valley out on Big Raccoon Records) and watching them play those songs live is like watching the living dead rise to life and dismember an entire troop of boy scouts; it’s fucking awesome. This is the first show they played with Will Webber Knietell, formerly of This Is My Fist, permanently on drums. 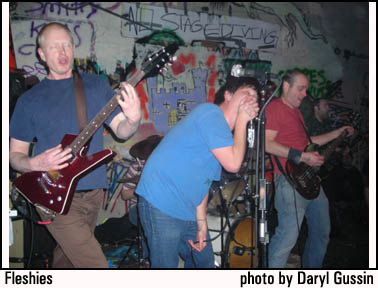 After the Abi Yoyos came the Bay Area punk rock monsters, Fleshies. The music these guys play seems so far beyond anybody else. I don’t know how they do it, but every time is listen to them, live or not, I just can’t believe the sound that they make. It’s so good and catchy while still being noisy and chaotic. I firmly believe that they are one of the most important bands around today.

Sometimes it sucks to be the last band to play at Gilman if your set has to go past 1 AM, because BART (Bay Area Rapid Transit) stops running at 1 AM and everybody’s gotta get back to the suburbs or the city. Luckily I had a ride, so I got to stay for 30 Foot Fall. I had never heard of this band before but I guess Joel saw them play in Houston some time ago and really wanted them to come play his birthday. 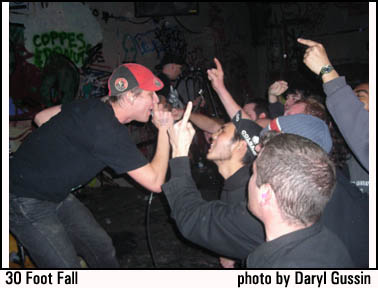 There weren’t many people left but the fifteen to twenty people who were there for them were so fucking into it. They sounded like an odd mix of cow punk and oi played really fast and with a lot of fancy musicianship and singalongs. The lead singer reminded me of a cross between Greg of the Bouncing Souls and Mike of the Riverboat Gamblers. The band seemed like they’d fit in at the Warped Tour better than Gilman, but the people who were there for them seemed to have a really good time, so who the fuck am I to say shit?

Well, Punk Rock Joel’s another year older and we’re all thankful for that. I can’t wait to see what bands play next years show, although I’m sure it will definitely rule.