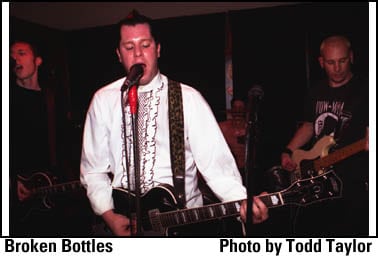 Jesse Rich aka Jess “The Mess,” the lead singer/guitarist for San Juan Capistrano’s Broken Bottles, passed away on Wednesday Dec. 8. I did not know Jess, but I definitely knew his music. In other words, I think I knew him pretty well.

I first started listening to Southern California punk rock in 1981. My hometown of Concord, North Carolina was a long way from Southern California, so I found out about the scene mostly by reading about it. I had been tipped off by TheTomorrowShow’s ridiculous story in 1980 on the new breed of “violent punk rock” and I jotted down the band names that the show’s moronic guest show mentioned for further research. Before long, I was fully entranced by the likes of The Adolescents, Agent Orange, TSOL, Black Flag, and Social Distortion. I couldn’t believe that some of the best music I had ever heard was coming out of this one area and being made by people about my age.

Over the next three years I bought as many American hardcore punk rock records as I could afford. I always thought of Southern California bands as the heart that pumped blood out to the rest of the hardcore punk body across the country. But by late 1984 the creativity of the scene had been displaced by way too many bands playing what sounded like generic thrash to my ears. As a result, I drifted away from the scene. My attendance at shows and purchases of new punk rock records dropped off to just a trickle.

That change held sway until 1996 when I wound up diving back into the scene full-force. I recall hearing a U.S. Bombs album playing in a local record store and thinking that my favorite style of punk rock must be in vogue again. After seeing a young, but old-school sounding, local band playing a show with tons of kids crowding onto the stage to sing with them, I knew that I had to go back to my true musical love. If I were worried about fitting in with my own age group, I never would have made that decision. Since I wasn’t remotely concerned about fitting in, I could give myself over to the music and the scene without any nagging self doubt. Another bonus is that I have since gotten to hear even more of the best music I have ever heard. This time around it was from people younger than me, which brings me back to Jess and Broken Bottles.

I first heard Broken Bottles on the Hostage Records comp Cuts Volume 1 in 2002. Their song “Gothic Chicks” was pure pleasure. The music was simple and slower than most modern punk rock. It reminded me of early Social Distortion. The melodic guitar lines and Jess’s voice were the dominant signposts. Jess possessed one of the most unique voices I’ve ever heard. He was nasal but never whiny and managed to convincingly pull off anything from a menacing snarl to exhausted desperation, sometimes all within the same song. The lyrical style made me think of Chuck Berry, the first great lyric writer in rock’n’roll in my opinion, with Jess-penned lines like, “Her hair is black, her face is pale/ She used to be new wave/ She likes The Cure, Siouxsie and The Banshees, Misfits, 45 Grave.”

I was eager to hear more and not long afterward I picked up The Bottles’ Not Pretty EP. The six songs here fleshed out the doomed-but-ain’t-we-having-fun worldview that encased all of their music. Jess always had a way to accent the underlying serious nature behind the fun. On “I Want Problems,” he sounded mournful as he ticked off the kinds of problems he had: “mental, emotional, physical, and legal.” Songs like “Kelly Osbourne” and “Bloody Mary” would have been throwaway joke songs in the hands of too many young men with a guitar in their hands and a smirk on their faces, but Jess managed to give them a desperate edge that caught you off guard. Lines like, “She’s got a lawyer and I think she’s gonna sue/ I have no money and I don’t know what to do,” tell a deeper story than the “I’m in a porn with Kelly Osbourne” chorus. You expect the verses to be nothing more than attempts at lascivious punch lines, but Jess aimed for something more. He usually got it, too.

At the heart of his lyrics you most often found the terse, memorable descriptions of his troubled but meaningful life: “The neighborhood watch is after us,” “I’ll make the couch sound like it’s the place to be,” “We’ll be safe inside of here/ come on let’s run away,” “They said your friends can’t come around because you bring the wrong crowd,” “I’m gonna crawl right up at your door/ I’m gonna fall right through the floor.”

He was a great writer who was criminally overlooked by students and lovers of writing, probably because few of them would look toward modern-day, grimy punk rock bands for inspiration.

When Jess wasn’t playing with The Bottles, he led a colorful offstage life that sometimes caught the eye of local law enforcement. My favorite story involves a cop trying to sue Jess. The cop claimed that Jess’s teeth had cut his hand when the injury occurred while  the cop was using his hand as a fist and bashing in Jess’s teeth repeatedly.

I’ve been pouring over the numerous online tributes to Jess as I was trying to decide what I wanted to write about a person I’d never met whose musical legacy deserves to live on. My favorite quote came from an ex-girlfriend named Dani Santi who wrote: “You were always a good friend to me and you were by far the strangest boyfriend I ever had. You will be deeply missed.” I would like to think that Jess would smile at that “strangest boyfriend I ever had.” Punk rockers do want to be missed when we’re gone, but, at the same time, we’ll wear words like “strangest” as a badge of honor.

I will always remember Jess for the great body of music that he and The Bottles left behind. Let’s hope they will inspire another generation of punk rockers coming up behind them. I mean, somebody’s got to keep that damn neighborhood watch in check, you know?

Follow the link for more info on Broken Bottles:
http://www.facebook.com/pages/Broken-Bottles/231630296768