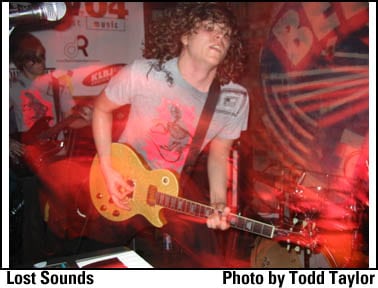 It was a rainy, sullen day in Memphis on January 16, 2010. Friends and family gathered at the memorial service of Jimmy Lee Lindsey Jr., better known by his punk rock alias, Jay Reatard.

At the service, Lindsey’s white Flying V guitar hung high above his casket and was later laid to rest with the prolific and eccentric songwriter.

A heart-tugging eulogy was delivered by Lindsey’s mentor Eric Friedl (Oblivians/Goner Records). Friedl booked the first Reatards show and released the sloppy Reatards debut, the Get Real Stupid 7” back in 1997, when Lindsey was just seventeen years old.

Lindsey, twenty-nine, known for his massive catalog of music all done with DIY recording methods, was found dead at his Memphis home in the early hours of January 13.

The man responsible for the angry blues-punk sound of The Reatards, the synth-heavy Lost Sounds (with fellow Memphian Alicja Trout), his label Shattered Records, and his recent successful and frenzied solo career was suddenly gone.

The cause of death, according to a Shelby County medical examiner, was “cocaine toxicity, and that alcohol was a contributing factor in his death,” The Commercial Appeal of Memphis reported.

This terribly sad news happened amidst an upswing in his career since the 2006 release of his debut solo LP, Blood Visions (In the Red) and his string of Matador 7”s in 2008, which were later compiled on a full length.

Aside from his own angsty, home recorded, punk LPs (i.e. 1998’s Teenage Hate), Lindsey also frantically released vinyl with a slew of side projects including The Persuaders, Bad Times, Final Solutions, Destruction Unit, Nervous Patterns, and the undeniable precursor to his solo material, The Angry Angles.

He’d come a long way since his rocky upbringing in Memphis. A life-altering punk show he attended when he was fifteen years old would soon pave the way for his own career, which included over twenty albums, countless singles with an array of bands, and multiple tours around the world.

“In 1995 Rocket From The Crypt had The Oblivians open for them in Memphis at this big shitty rock venue,” Lindsey told me in an interview I did with him in October, 2007. “I thought The Oblivians were the worst band I’d ever seen, but there was something about it I was drawn to … I bought all of their records. From there I just started hanging out with Eric (Friedl) and he turned me on to other stuff I would have never found out about otherwise.”

After Lindsey mailed an Oblivians-influenced cassette demo to Friedl, The Reatards (which then consisted solely of Lindsey) would soon become a key part of the Memphis punk sound.

“Eric called up a few people and asked them if they’d play with me,” Lindsey said. “Greg (Cartwright) from The Oblivians was the only person who agreed, he played drums, so it was just a two piece. It was like that for a year at least. It was kind of weird going from ripping somebody off to actually playing with them.”

Cartwright, who now lives in Asheville, NC and fronts Reigning Sound, recalled his earliest memories of Lindsey in the mid-‘90s when he was a young and snotty punk.

A regarded songwriter in his own right, Cartwright immediately noticed Lindsey’s passion and natural talent.

“Right away anyone could see that music was no hobby for Jay. He was incredibly focused and capable of delivering fully realized snapshots of his life – sometimes with disturbing clarity,” Cartwright said. “His four-track was like an extension of himself and with it he could tap into a place that most musicians never reach. The painful and cathartic process of bearing his soul had become as natural as a reflex. Songs just poured out of him … the ritual of building the song, alone I believe, had become a place of spiritual calm for him and he wanted it to continue all the time. Jay’s intense recording schedule and creative attitude were a vital necessity to him being alive.”

“Everyone in Memphis was immediately impressed with how talented he was,” Bomar recalled. “He was this fourteen-year-old kid who came out of the middle of nowhere from a bad neighborhood in Memphis and was writing songs and recording them better than anyone else around.”

At seventeen, Lindsey toured the Midwest with The Reatards, along with The Persuaders (which featured his close friend, King Louie Bankston). The following year, 1998, The Reatards toured Europe and then the west coast.

In 1999, while still fronting The Reatards, Lindsey’s creativity began to grow. Along with (then girlfriend) Alicja Trout, he formed the dark, synthy-prog unit, The Lost Sounds. The band would go on multiple successful tours and record a pile of albums until its bitter breakup in 2005.

In a 2007 interview I did with him, Lindsey compared The Reatards with The Lost Sounds and recalled the beginning of his transformation as a musician and front man.

“I don’t know, it really wasn’t much different at first,” he said. “It was still just me breaking crap and rolling around and getting naked, except there was a keyboard behind it. The girl in the band, who was also my girlfriend at the time, got really annoyed by that. So, basically, under girlfriend pressure, I started concentrating more on music rather than freaking out.”

Trout said a Screamers cassette tape given to Lindsey by (then Reatards drummer) Ryan “Elvis Wong” Rousseau was likely what nudged Lindsey in a more progressive direction.

“I think the Screamers got Jay into the idea that keyboards could be used in a way that did not invoke the Flock Of Seagulls or Duran Duran sentiment,” Trout said. “Jay had always loved Devo. I’d say his favorite bands were always the Ramones and Devo.”

Around this time Lindsey’s status as a wild man/prankster began to grow.

“After Jay got a little older and began living on his own he started to get a bit of a reputation as someone who pushed peoples’ buttons,” Bomar said. “He liked to pull pranks and do crazy things. Jay was never afraid to tell someone what he thought about him or her. He would always make me laugh with his brutally honest opinions of people and general observations about life.”

While Lindsey was notorious for wild on and off-stage antics and brilliant garage-punk releases, he  began receiving mainstream attention for his latest, more intimate songwriting. Where previously fanzines and punk mags, like Horizontal Action and Maximum RocknRoll would cover Lindsey, glossy magazines across the globe finally got the memo. Even the New York Times, did a Jay Reatard feature.

Freshly signed to Matador Records, and backed by fellow Memphis musicians Stephen Pope (bass) and Billy Hayes (drums), Lindsey embarked on an almost never-ending tour around the world. While still sharing the stage with many independent bands, his band also played huge festivals, performed on stage with Beck, secured an opening slot with The Pixies, and recorded a split single with Sonic Youth.

In an August 2009 interview I did with him, Lindsey talked about his recent boom and his new, more relaxed audience.

“The high point is— almost everything,” he said. “I can’t really think of any negative points in the past year-and-a-half of my life. It’s all been up hill. I know that stuff eventually runs out, but whatever. I’m just enjoying everything. I try to take it all in and remember.

“I’m to the point now where it’s not all about getting completely shit faced and trying to put on a spectacle for people,” he said. “It’s become something else. I’ve found an audience that’s willing to accept it. It’s entertaining enough for them to just watch somebody get up and play some songs and convey a little emotion as energy. They don’t need the next step. They don’t need to see a three-ring circus with a guy trying to destroy himself on stage every night.”

While Lindsey may have toned down his stage show, the wildness didn’t completely disappear. Pope, who also plays in The Barbaras (Memphis), said his time on the road with Lindsey (February 2007 to October 2009) was filled with bizarre stage moments.

“At SXSW in 2007 we played an outdoor party,” Pope recalled. “Toward the end of the show people rushed the stage. One guy tackled Jay, so Jay ended up pinning the guy down by his neck with the end of his Flying V. The crowd started chanting, ‘Kill him!’ Jay continued playing with the guy pinned down. At this point I think I fell off the stage, but luckily was crowd surfed around. Billy was swinging from the rafters. This was one of the first shows we played together as a band.”

Stage antics aside, Pope said Lindsey had an unconventional personality.

“Touring with Jay was the single most bizarre experience of my life,” Pope said. “Jay was a mind altering drug of a human. He had such a unique perspective and personality that being with him so much completely altered my view of the world and my sense of reality. I think he impacted many in the same way.”

Amidst a vigorous touring schedule and his rising indie rocker status, Lindsey still made a point to support a bunch of under-the-radar bands. In September 2009 he booked the Shattered Records Tour, which included performances from The Useless Eaters, Digital Leather, Nobunny, Cheap Time, Lover!, Box Elders, and Hunx & His Punx.

Lindsey’s ever-changing songwriting began to lose some of the anger. In a 2008 interview with Turn it Down Interviews, he gave insight on his changing influences for his (then upcoming) album Watch Me Fall on Matador.

“I guess some people would call it twee music, more wimpy stuff,” Lindsey said. “I really like that style. I’ve really been wrapping my head around it and trying to interpret it. I’m trying to inject that style with more energy. My whole thing now is I’m trying to write songs that sound cheery, but obviously aren’t … this next record is going more in that direction.”

In a 2008 interview, Lindsey said he remained as focused and determined as he was in the early days.

“I can’t ever allow myself to be satisfied. I can’t ever allow myself to be content with the situations I’m in or I’ll lose my ambition,” he said. “As far as my music being to a point where I envisioned as a kid, where I want it to be—honestly it doesn’t feel any different from the first show I ever played. I always got this hole in my stomach that makes me want something more than what I have. Not Lamborghinis and fucking HDTVs or anything, I don’t know what it is, but it’s something that keeps me driving. I tend to beat myself up so I don’t get lazy.”

While Lindsey may have started his career looking up to The Oblivians, Cartwright said that appreciation  goes both ways.

“We all learned a lot from Jay, too. I would’ve liked to learn more,” Cartwright said. “His songs were revealing shards of who he was – telling me about his journey. His latest recordings were starting to shed a lot of the anger and show signs of a vulnerable person.”

Bomar said Lindsey’s impressive catalog of music (over one hundred releases) will remain an important part of Memphis music.

“Jay was the future of Memphis music,” Bomar said. “He was the guy from here out on the front lines touring non-stop and making records. Jay was a musical prodigy and a genius. It is incalculable yet to determine the effect he had and will have on Memphis music.”