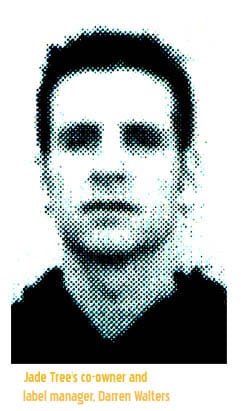 Jade Tree Moves a Showcase Due to Clear Channel: An Interview with Darren Walters By Todd Taylor

Public transportation is atrocious in Los Angeles. It's highly suspicious that trains go directly to Universal Studios, yet none link directly to the airport. Some bus lines just don't run on some days, and if it's a holiday, you're fucked, even if you call or check the MTA website beforehand. To add to the confusion, there are no posted comprehensive bus routes near the stops. Sure, there are metal signs stating what buses stop there, but no times, no charts of the routes. It's not like there isn't a place for the maps. Near a great many bus stops there are nine feet tall metal structures, triangles on legs, that advertise everything from new movies to dining suggestions. If you look at the base, chances are you'll see one of these logos: Clear Channel or Viacom. Clear Channel, the "#1 out of home" media company in the world and its self-proclaimed "global street furniture" (i.e. the seats that are designed so no one can lay on them) have over 6,000 transit contracts worldwide. When I walk the mile round trip to check mail, there are over six Clear Channel billboards on my route.

I began to hate Clear Channel more when I learned that they owned nine radio stations in L.A. alone - many of which my neighbors blast - everything from talk radio, adult contemporary, sports, to "old skool and today's R&B." Not only does Clear Channel clutter the airwaves and make bussing a pain in the ass, they are starting to own and encroach on more and more music venues in Los Angeles. Right now, they're going for the big and/or fancy venues and already own Blockbuster Pavilion, the Verizon Wireless Amphitheater, and the Wiltern. They're looking to buy more.

It caught my attention that Jade Tree, an independent label out of Delaware, was moving their CMJ showcase out of a specific venue because of Clear Channel. I wanted to know why. Darren Walters, co-owner and label manager of Jade Tree, was kind enough to answer some of my questions.

Todd: For someone who doesn't know, specifically, what does Clear Channel do that made you take a stance against them?

Darren: Clear Channel is basically an entertainment monopoly which owns 1,200 radio stations, tons of concert venues, and who knows how many billboards across the country, thus enabling the company to control music in a variety of ways -such as radio airplay, ticket prices, restrictions on where artists perform. That stifles competition. Clear Channel is also notorious for their less than perfect business tactics and attempts to silence their critics in the media. What makes Clear Channel specifically scary to punk and indie music fans is that at this point, nothing is really too small for Clear Channel to get involved in, so that they could very well control most of the venues where fans might see bands of this type in their area.

Todd: What makes them more onerous than other multi-national media organizations that a label, such as yourselves, will come into contact with? By this, I'm not implying that Jade Tree is a major or anything like that, but from my experience in making a small magazine, it's almost impossible to not be involved with some facet of a huge company, even some that I don't even directly deal with.

Darren: Nothing. It's just an issue that directly has an effect on Jade Tree, Jade Tree fans, and Jade Tree bands. Obviously, there are plenty of huge corporations that need to take a beating! This one just happened to strike a chord with Jade Tree.

Todd: What brought this to a head?

Darren: There was an issue in our local Philadelphia scene where Sean Agnew of R5 Productions was being harassed by various sources, such as the Philadelphia Licenses and Inspections, which eventually led to the closure of the city's most popular all-ages venue, the First Unitarian Church. This closure was during a Jade Tree band's show, The Explosion, so I felt that hit Jade Tree directly on that night. Sean felt that Clear Channel may have been behind these harassments, so Jade Tree got behind him in a show of solidarity on the issue. Whether Clear Channel had anything to do with it in the end, the events in Philadelphia got me personally interested in becoming more knowledgeable on the subject and doing what Jade Tree can as a label to show our support for our friend and community. This support eventually led to Jade Tree moving our CMJ showcase to a non-Clear Channel owned venue.

Todd: Why take the stand here and now?

Darren: This is a small act and one that Jade Tree could act upon, which is rare for a label. I thought it would be an insignificant act of protest, one that would go ignored by everyone, but one that would show support for our community and friend. I knew that this wouldn't mean shit to Clear Channel - they probably don't even know about it, and if they did, they would not care. It's just a minor event to them. However, judging by the amount of interviews that I have been doing about this issue, perhaps our move did more than I had ever guessed that it would.

Todd: Do you feel like you're tilting windmills or do you feel a groundswell of "That's it. No more"?

Darren: I don't think it's either. It's more a combination of both depending on what you do in the industry and what Clear Channel means in your life. I think it is way too early to see if this move changes anything in the long run. I don't think that it will, but then again, I didn't think this issue would spark as much controversy as it has.

Todd: Who have become your allies in going against Clear Channel?

Darren: No one, yet! However, Jade Tree isn't "going against" Clear Channel. Jade Tree is not attempting to spear head the battle against the corporate giant, but rather show that small, seemingly insignificant acts can sometimes have an effect.

Todd: Have there been any people - bands or promoters - that you thought were on board with you that have jumped ship?

Darren: Not really, but it has been strange where the support has and hasn't been coming from. The sources of both haven't been as obvious as I would have thought. It will be interesting to see where this leads.

Todd: Has Clear Channel tried to be tricky or tried to give you concessions that you can see right through? Or have they been forthright?

Darren: I have never had to deal with anyone who was a direct Clear Channel employee. In fact, anyone who works for the company through a venue (such as Irving Plaza), has been nothing but cool. However, this doesn't make Clear Channel a cool company.

Todd: Have they tried to blackball you? Told you that you'll never be able to set up shop at CMJ again, anything like that?

Darren: This has not happened. Again, I think that it is too early to tell what the resonating effects will be. I do know this, that the ire of anyone who feels wronged by Jade Tree's stance should not take it out on Jade Tree bands since this is Jade Tree's opinion on the matter and not the bands'. Jade Tree doesn't presume to dictate what any of our artists think regarding this matter or tell them how to run their business, plain and simple.

Todd: What's the next step and how can people get involved or at least know more about your battle?

Darren: People can get more educated on how Clear Channel effects them. And if there are non-Clear Channel venues in your area, please support them and the bands that play at these venues. This will ensure that a network of independent clubs and promoters can exist throughout the country giving the option to fans and bands around the country who want to avoid Clear Channel operated venues. There are quite few resources online, such as Clearchannelsucks.org, that provide tons of information on the subject. Check them out!

Some interesting facts about Clear Channel that Todd found:

It is the world's largest producer and promoter of live entertainment.

Clear Channel's nearly 1,200 radio stations represent about 10 percent of the U.S. radio market, and more than half of the country's major popular-music stations.