I expected that last night’s show was going to be a dancey one, and I am delighted to report that my expectations were dead on. Despite my friend’s double flats and broken pump (curses!), we got to the GreatAmericanMusic Hall (http://www.gamh.com/) just as the Jacuzzi Boys (www.myspace.com/jacuzziboys) were coming on. I was so glad we did because they were great! And I think the show, overall, helped to disperse any frustration my friend was feeling about the above-mentioned flat tires and busted pump scenario. Yay!

The Jacuzzi Boys, well first of all, what a weird name. They’re young (can’t wait to see what they’re up to in a few years!), apparently from Florida, their bass drum had, in between the “Jacuzzi Boys” name, a picture of a crab. Do they have crabs in their jacuzzis in Florida? And don’t be yucky! I’m talking about the orangey-red, plucky crustaceans, not some kind of STD. Anyway. They also had the head of an owl on stage in front of the drum set—one of those plastic (I think they’re plastic) owls that you put on your roof or wherever to scare away other animals. What are they supposed to scare away exactly? And does it ever work? Needless to say, that little owl head didn’t scare me away at all. The music was too good!

From the (insubstantial) (unimportant) outside, one might not guess the guys in the band would even hang out with each other regularly. The singer/guitarist had long dark hair and he wore flannel and jeans. The bassist had closely cropped hair and a neat beard and button-up shirt. The drummer had some kind of afro type situation going on that was tied up in a big poof and he was wearing pretty sunglasses and some sweater with gold fringe on the shoulders. Delightful.

Together, the unlikely looking threesome played some stellar garage-style tunes. I really love me some good garage, it is so fun and great! They had some nice Beguiled /Reigning Sound /Cramps stuff going on. Occasionally—is this weird?—I felt a little bit of Mudhoney and The Jesus And Mary Chain in the vocals. I loved the guitarist’s voice and when he got more weird and dark and swampy, it was especially nice. The drummer sang back-up and he was great. They played a few slower tunes that were a little dark and distorted, and I enjoyed those, but I really loved the faster stuff: gorgeous bass lines and super rockin’ rhythms. I could not understand why the whole crowd wasn’t shaking it, it was bollocks. But no matter. I had a great time and I definitely recommend that you go check them out if they’re coming through your way. I picked up a split they did with King Khan and I’m anxious to hear it, but what I listened to on their myspace doesn’t do their live show justice, I don’t think. Maybe it was just me and I needed a good night out, but it just felt really good to dance and not think.

Oh! They also had a cool shirt with poodles on it. Squiggly poodles. How can you go wrong? 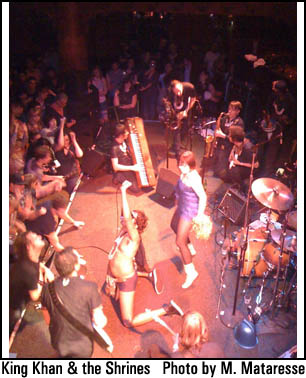 Next up was King Khan & the Shrines (http://www.hazelwood.de/kingkhan/index.php), or wait, maybe I should say, “Next up was The Supreme Genius of King Khan and the Shrines.” Jello Biafra introduced them.

Anyone worried that James Brown is actually dead just needs to go see King Khan and the Shrines.

I knew that it was going to be a crazy show, I’ve seen King Khan with the King Khan And BBQ Show, but I still wasn’t entirely prepared for the fun and absurdity that would ensue.

When we put them on to check them out on Thursday night, my roommate called the Make-Up comparison right away, but I didn’t hear it until KK gave a little “yowwww” and then I realized my roomie was totally right. This was even more evident at the show. So, basically, I’d say KK himself was a hilarious and marvelous amalgamation of James Brown, Ian Svenonius and, for me anyway, Blag Dahlia from the Dwarves. It’s not that he sounds like Blag or anything like that, but I think he reminded me of him when he was getting more pervy (which was not infrequent). So those three and, of course, most of all, a healthy portion of Mr. Khan himself.

The Shrines are much more R&B and funk than the BBQ show. By the time they went on, Great American had gotten much more crowded. During their set, lots of people were dancing, which was loads of fun. In addition to KK (who is the lead singer and occasionally played guitar as well), they had a bassist, guitarist, drummer, keyboardist, bongo player, saxophonist, trumpeter and pom-pom shaking
go-go girl. This woman, by the way, in her electric blue, fringy dress, and shiny gold boots with shiny gold matching pom-poms, was totally excellent. She was really shaking it the whole time (and they played a long set), she kept moving. She was awesome. Later I had a conversation with my friend about how, although I did exhibit some disdain for cheerleaders during high school and to this day I am not a big fan, pom-poms, for some reason are not only totally acceptable, they are actually quite welcome and can only be regarded as a useful and merrymaking accessory.

In addition to this rather large regular crew, later in the evening another guy came on to play some other drum and tambourines and such, the Jacuzzi Boys came on at various times and also played some tambourines (with the dummer looking oh-so-fancy in a gold sequin dress), and at one point in an encore, two or three other guys were up there singing as well. It was a big crowd. I counted about eight guys playing some kind of percussion at one point. Excellent! Added to this, when the show was at that pre-encore point and the whole band was not yet back on the stage but the keyboardist had come back on and stated playing “Ghost Rider” by Suicide (yes!), Jello came on and started singing that. Good one! Not too often you get to hear that. It was right before they started playing “Rebel, Rebel (David Bowie),” which Jello stuck around to sing with KK and the crew.

But I’m skipping around here.

Basically, King Khan & The Shrines put on a very fun show. It was very high energy most of the time (except maybe once when it got a little weirdly mellowish / trippy as KK was going on about sticking his whole head—and then his arms—and then his legs—into his woman, and then crawling back out and flopping on the floo—he made the band do the “flopping” sound about four different times because the first few times weren’t “wet” sounding enough). There was partial nudity, from both KK himself (although he had a lovely silver cape and at one time sported a beautiful Josephine Baker-esque gold headpiece with sunglasses that made him look very much, as my friend noted, like Rick James), as well as from a woman in the crowd who felt inspired to take off her shirt (to the delight of many people in attendance, I’d reckon). I mean to say, there were shenanigans. It was silly. Half the time I didn’t know what in the hell King Khan was talking about. This guy next to me, who I think might have actually been pals with King Khan, just kept shaking his head and laughing. I found that I spent a lot of the night laughing as well. And in my opinion, that, in addition to dancing and getting excited about the music, makes for a great show.

All hail the Supreme Genius of King Khan & The Shrines!

US BOMBS: We’re The Problem: CD