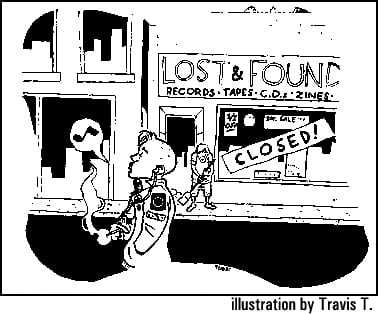 It’s the Record Stores That End up Being Burned: Dr. Strange's 2nd Column

Dr. Strange here with your daily dose of what’s right and wrong. So sit back and take your medicine, chumps! This topic is long overdue (from myself, at least) but has been getting more and more press lately: downloading and burning CDs. I have a record label as well as a record store—both for over seventeen years now. Over the years, I have seen a dramatic fall in CD sales. I have also seen many really cool record stores close down, some after over forty years of being in business. In the past three years over 1,000 independent record stores have closed down. This is according to the almighty institute (http://www.almightyretail.com/).

There’s been a lot of debate about the good and evils of burning and downloading. Some say that downloading actually encourages people to go out and buy the actual CD. I myself, as a label, have a page on my website where people can download (for free) a couple songs by each band in hopes that they will want the entire release. If it works in that way, then that’s great. But I fear, many times at least, that it’s not actually encouraging people to buy.

Couple that with people burning CDs and this leads to even more record stores going out of business. If I had a dime for every time a group of kids walks into the store, one kid picks up a CD, and his buddy says: “Don’t buy it. I have it, I’ll burn a copy for you,” I could retire and not have to worry about all this!

Before you ask me, yes of course I have done the same. I have about ten to fifteen CDs that I have bought and then burned a copy of so I can listen to it at my house and at the record store. I have a few burned CDs that friends have given me. I’m not a big offender, but I’ve still done it. But I’m not going to do it any more. I can’t be a hypocrite on this topic. It’s far too important to me. And the solution is to make this an important topic by getting people in the punk rock community to do what they do best: make a difference.

Many of you will think, “What’s the big deal?” or “I’ll let the other guy worry about it.” I’m asking you to worry about it. I’m asking you to actually do something about it. If we don’t do something, more and more cool record stores will go out of business. More and more bands will cease to exist—or at least not get exposure and their message out. A record store and band go hand in hand. One is like the car and the other is the fuel that drives it. My fear is a county full of junked cars rusting. Once we reach that point, there’s no going back. Of course, music and stores will exist in one form or another, but I would just hate to see an institution such as the record store go out of business.

Going record shopping, for me at least, is such an important and fun thing to do. I’ve spent many hours with my buddies racing through all the records trying to find that one rare record before my friend did after driving an hour or more to Zed’s in Long Beach or Vinyl Fetish in Hollywood (both out of business by the way) to find some records. Supporting record stores is very much the same as supporting a band by going out and seeing them play live. It’s a very important part to the equation.

Am I just being “old” on this one people? Do others feel this way? I really wonder at times. I think (know) the stores that are out there today that do not have a website and only sell CDs are in for trouble. I’ve seen this day coming for a few years now and it’s one of the main reasons I put together a great website that not only sells music but also shirts, creepers, and bondage pants.

Like I said earlier, this is a problem that can be fixed. It’s actually quite simple. Stop (illegal) downloading and stop burning CDs. Don’t leave it up to the other guy to take a stand on this issue. They won’t. The alternative is something I’d rather not think about. Please e-mail me with your thoughts. I’d love to hear from anyone that actually gives a shit one way or the other. [email protected]

Until next time, Take Care
–Doc