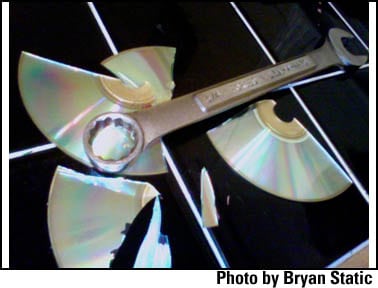 Punk rock seemed like it was almost a utopian concept upon first inspection. The emphasis on community and the rejection of the common aspects of the music industry were selling points, for sure. People were choosing to be obscure and strange. They would rather do what they want and do it however they like! Yeah! No rules! Jump up on the table and shout “Anarchy!” Somebody start playing the Beach Boys, god damn it! Or, at least, that’s how it all played out in my head. If people could play nice then we’d all get good toys, but someone always has to fuck it up. Just like Socialism.

Recently, it was my displeasure to review an album by a band, who shall henceforth be referred to as The Sore Losers. Just as a general rule I try not to be a dick, but I am a critic. There are points where the latter is more important than the former. If I think a band is bad but has the ability to improve, I try to put them down gently, but when I hear no redeeming quality in the noise that’s protruding from my stereo, why should I be nice about it?

There is a helpful safety net in reviewing recorded music. There are degrees of separation between the artist and me. It allows for a much more honest, and sometimes harsh, opinion to be given. If my job was to sit the artist down and tell them every criticism that I could muster, there’s no way I could be as sincere. When you send your music to a complete stranger, what you want is an honest opinion. If you want mouth-numbingly sweet sugar, stick with talking to your friends.

To be fair, the critic is an almost undefeatable monster. Once the album is placed in the mailbox, the events that follow are entirely out of your control. I envision the rest as a game. The rules are simple: the defense (the band/artist) chooses how a structure is built and constructs it to the best of their abilities. The offense (the critic) comes along and looks for the structural flaws. It’s their job to discover if the building will collapse or if it will stand strong. Of course, every once in a while, the defense will attempt to win by constructing a tent of a sheet and four sticks. It may be weak, but you cannot necessarily say it will fall over.

Let’s imagine, then, that a player decides to win by gluing a bunch of playing cards together. That’s the equivalent of receiving a piece of music in your review box that looks and sounds like it was thrown together in twenty minutes. The Sore Losers sent me a CD-R like this. It was bad, so I gave it a bad review. I will admit that the review was mean spirited and probably could have been phrased better, but it wasn’t like I was pushing it as the worst thing I had ever heard. The review did not see print and landed on the website instead. By the end of the month it had left my radar.

The flip side of this story is that I could have just destroyed some (young?) band’s hopes and dreams in less than fifty words, but our heroes didn’t see that way. The Sore Losers found the review and they were none too pleased. So they did what any logical person would do and posted the review on their Myspace with a slightly altered wording so it sounded like I was giving them high praise.

There’s some small part of my brain that muttered something along the lines of, “Well, they do have the right to defend themselves.” Except they don’t. Their defense was the music they sent in. You don’t get a postscript. You have to think of whatever you sent in as set in stone. It cannot be altered, or even destroyed. Which I guess makes it more like it was laser engraved on the moon.

I am but a man. Bands, you don’t have to accept, or even acknowledge what I or anyone else says. Who am I? I am just a meaningless blip on the radar. What’re the chances that my opinion, which did not even see print, is going to affect the outcome of your career as performers?

Before you think I’m some crazy man who does nothing but search his name on the internet all day, I was informed of all of this by a third party via e-mail. Said correspondent also went on to tell me that the band proceeded to trash Razorcake for being elitist. I suppose that’s true; we do feel that we’re above bad music. However, that’s beside the point, because Razorcake didn’t review your music, I did. Yes, the review is associated with Razorcake because they asked me to do it, but I do not represent the magazine as a whole. I cannot guarantee that the entire cast of contributors would feel the same way about your little CD. Are you really that angry at an organization for doing the job you asked them to do? No one said you had to send in this CD.

Is it really so hard to take negative criticism? I am surprised every time anyone comments on my work and it isn’t negative. If I’m not told what people don’t like about what I do, then how am I going to improve? The Sore Losers got more than one review from Razorcake that the band tried to spin in a positive light. Which means they’re at least in the first stage of grief, but it’s simple math. If more than half the people reviewing your music aren’t enjoying it, maybe they aren’t the problem.

I have not and I will not confront the band about this. If this how they want to deal with my opinion than I am sure they will have a long and prosperous career in their respective music scene.

I talk about my band in high school a lot because I don’t think I have the proper distance from anything my new band has done to say much about it. We were some sort of street punk/hardcore band that I suppose was good enough for a bunch of fifteen-year-olds. The problems really set in when we began evaluating ourselves past our first few shows. No one would give us an opinion about the band beyond the complimentary “good set.” Which says about as much as “cool amp.”

When we began to discuss our future, there was a huge dissonance between the others and me. I translated the “good set” to mean that we weren’t performing well enough to achieve compliments beyond that. They interpreted it to mean that we weren’t doing anything wrong. I became increasingly critical after that, mentioning every little fuck up to the point where I would do it between songs during a set. Not my proudest moment.

The band didn’t take it too well. It was one factor that led to our inevitable demise. Any problems that I pointed out were quickly shot down because my bandmates decided that they were “unimportant.” I’m not sure if I was being too harsh or they just generally couldn’t take criticism. Either way, when I started a band where I was the primary songwriter, I started going out of my way to make sure my band had no problem with the song.

It makes me wonder sometimes how people are able to ignore their own work. I worry constantly doing anything if it’s worth the time and effort I’m putting in for the final product. After a certain point—when the praise overwhelmingly drowns out the faults—then you can probably move forward on that particular aspect of your creativity. Do people really delude themselves into thinking they are so great just by being themselves?

I remember this one band from the same time my old band existed. I can tell you right now that this story ends with the band fading away. They had some terrible quasi-political name, played mediocre music, and were complete assholes. They had absolutely no friends within the circle and the only reason they got shows was because they knew enough people from their school to make a sizeable crowd. If you said a single negative thing about them and it got back around to them, they’d threaten you. I know at least one of them got in major shit for intimidating the wrong guy.

Ideally, I would love to get up on stage one day and after the set, tell the audience, “If you’ve got some constructive criticism to tell me, I’ll be over there.” But stories about threats and anger are far too common and I probably won’t get many people to take up my offer. I think they assume I have a much larger ego than I do because other people like me have one.

Do you know that one Henry Rollins quote about the bullshit ego musicians? “When you act like a jerk, they are completely unimpressed with the infantile display you might think comes with your dubious status.” In the original, the “they” he’s talking about refers to sound guys, but I like it better out of context when it sounds like he’s talking about everyone.

The Sore Losers, I’m not mad at you. I just wish you and every band with a similar mentality would be a little more willing to listen for once. Just because you did something bad doesn’t mean you can’t do something good in the future. I wish you all the best… just, please, grow up.

Now, who wants a piece of me? Tell me who else is changing my reviews or why I suck at [email protected]