The other night I went to go see the Extra Action Marching Band (http://www.extra-action.com/) show at the Uptown. I have seen Extra Action before and always have a fun time at their shows. I didn’t want to get there too late because there was another marching band playing that my friend’s friend was in, and I wanted to check them out (I like marching bands!). I didn’t listen to them before the show, but I figured that if they were playing with Extra Action they would probably be fun. My friend told me that her friend has always been involved with creative and interesting things in the past and she expected that it would be good. The band was called Itchy-O.

Suffice it to say, Itchy-O (http://itchyo.com/), from Denver, Colorado, totally knocked my socks off. Seriously! I believe they were formed by a guy who actually used to play with Extra Action (amongst many other bands), but, as I watched and listened to them, I envisioned my own scene about how the band had formed, and it went something like this:

Hey guys, do you want to meet in the alley behind the Chinese restaurant over on the south side around midnight to talk about starting a marching band? Let me know. Hope you can come. 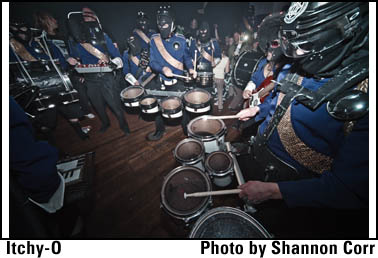 R2-D2 and friends all meet in the alley to talk and there they sit at tables that have big blocks of tinfoil in the middle of them that are set on fire for illumination and they are served very strong coffee by the children of Gwar. They decide that they should start a marching band.

They call up some tailors that are versed in making outfits for lucha libre wrestlers, Bedouin tribeswomen, and professional executioners, and get some outfits made up. They engage about one hundred other people (okay, not really one hundred, but a lot) who play various instruments (mostly percussionists of various sorts, guitarists, and keyboard players), plus a couple people that do a mean Chinese dragon, and set about learning some songs.

Then they go out and play and wow the hell out of people far and wide.

This was a new take on a marching band for me. I didn’t think that—from a strictly musical perspective—they were the best marching band ever, but the whole performance altogether really had me in the throes of love. 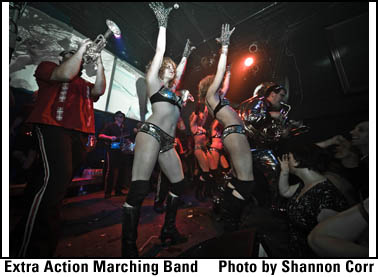 They came into the Uptown making lots of weird electrical noises that were pretty loud, eerie, and a bit menacing. And they looked kinda scary, with black hoods festooned with dimly blinking lights that covered their entire faces. Some of them had black sombreros with red lights on them. I suppose that was a bit festive but it was still weird. It was not a marching band with horns, but a marching band with synthesizers and bass guitars that seemed to be made up of people who liked noise music played by drum’n’bass DJs. But even though the music had this industrial, dark undertone, all the costumes and the props were really creative and excellent, so all around me in this packed crowd people were smiling happily and cheering.

A few times there were some intense build ups with all the drums and that would really get people (myself included) excited. Throughout their set, people were dancing and jumping around. There was a Chinese dragon shaking and wiggling and somehow managing to weave its way through the crowd. There was a smoke machine used intermittently and there were creepy people dressed all in black, faces covered, slinking around—some of them kind of sexy / scary, rubbing along your backside, and others who would grab your cheeks to try to get you to open your mouth and then, once it was open, they’d look inside your mouth with a little handheld light like some kind of alien aiming to steal your fillings or something. Although being pawed, grabbed, caressed and/or handled in this manner is probably not for everyone, I found it to be totally strange and excellent! 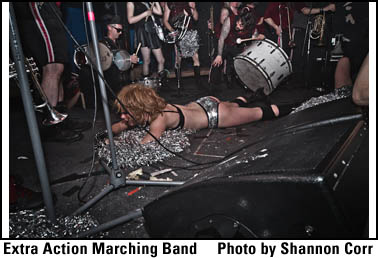 Extra Action was also super fun, although I have to be honest and say that I was so overtaken with Itchy-O (and because I have seen them many times before), I did not really give them the attention they deserved. They are more of an in-your-face sexysexy marching band (as a friend of mine so eloquently put it), and there is a lot of skin and general hotness about them. They have loads of brass instruments and fewer drums (than Itchy-O), but their drums are really tight, clear, loud, crisp and good. As are the horns! They have cheerleaders with silver pompoms and janky wigs that do routines and flagmen with short-shorts (and not much else) that have the skill to wave a flag enthusiastically yet without taking anyone (or any lamp) out. Although they weren’t too over the top last night; I have seen them a little crazier in the past. A friend of mine told me that, to his knowledge, they have been banned from various clubs in NY for getting a bit out of hand. I don’t find that hard to believe at all!

I had a really great time at the show and I would recommend to anyone—marching band fan or not—that you go check out either band if they march through your town.
Photos by http://shannoncorr.com/

NOAH’S APATHY: Something to Divide: CD