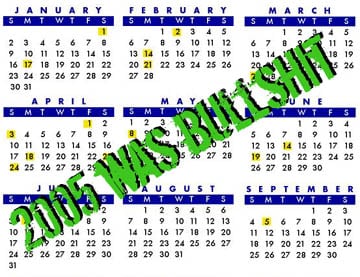 It Could Have Been Such A Wonderful Year…: A Column

There are a lot of things synonymous with the end of the year: The days get shorter and colder (or at least they do around here), but it's also when everyone begins reflecting back. Music fans list their new favorite records and live shows, sports fans watch highlights, people think back to everything that has gone on in their life. However, there tends to be a recurring trend amongst all the reminiscing, which is how much everything today sucks. Bands were better, teams played harder, we all had more fun, and somehow less responsibility. Somehow, no matter what's going on today, it can never hold up to how things were "back in the day."

True, I'm not really one to talk about being pessimistic; I'm often jaded and bitter well beyond my age. But I've still been thinking back over the past twelve months of my own life, just like everyone else. There was last New Year's, with my first (and only) date in months going painfully wrong and the only upside being that my car waited until the next day to break down. There were all the long days spent working at an often stressful internship in hopes of getting a job (I didn't). There was finally finishing up school after four years, only to begin wondering, "What did I even learn from four years of school?" (Still wondering.) There was the constant arguing with one of my closest friends, to the point where after spending time together nearly every other day, we couldn't even talk to each other. Worst of all was a week later, sitting by myself at party, miles away from home, hearing, "There was an accident and she passed away." Not really what you would consider to be a great year.

Now, before going any further, don't take all this as "boo hoo, my year was worse than yours, shower me with kisses, blah, blah, blah, etc." That's not my intention (and in all truthfulness, if you send any sort of sympathetic e-mail or similar gesture due to this, we are officially enemies). Did everything I mention suck? Yes. Will I still get depressed if I sit and focus on any of this? Yes. Am I even that happy of a guy most of the time to begin with? Not particularly. Just bear with me, I'm trying to go somewhere with this.

Fortunately, that wasn't all that happened. For that fairly brief list of everything bad, I can't even remember how many times I'd have to stop and suddenly think to myself, "Wow, I can't believe where I am right now." Over these same past few months, I've seen bands (and other great stuff) I probably had no right to see. I've seen more of the world (well, America, at least) than I ever have in my life. I've made tons of (okay, some) new friends. I've had people tell me, "I've seen stuff you did, and liked it." And I'm not sure, but I think for every time I got stressed out, I also got at least one high five.

The thing is, when it comes down to it, yes, the world does pretty much suck. I would say, "That's why it's so important to do whatever you can to keep yourself happy," but it's not really enough. These days, it can take even more than just finding something you love (chances are if you're reading this, that probably consists of a new band). Just remember the bad stuff is inevitable. But all things considered, you can always move on if you're still standing by the end of the day, and how you look at and deal with everything is completely up to you. Hell, I still actually started the year by going on a date. I actually LASTED interning, for nearly four full months. I, someone who once said, "I'm not bothering trying in school, because it'll just make my guidance counselor look good," actually graduated college in four years (apparently that's a big deal or something). And that's not even anything I even CARE about that much.

So that leaves me here, typing this, in the middle of the night while watching cartoons, leaving me with not much else to think other than, "You know, all in all, this was a pretty good year."