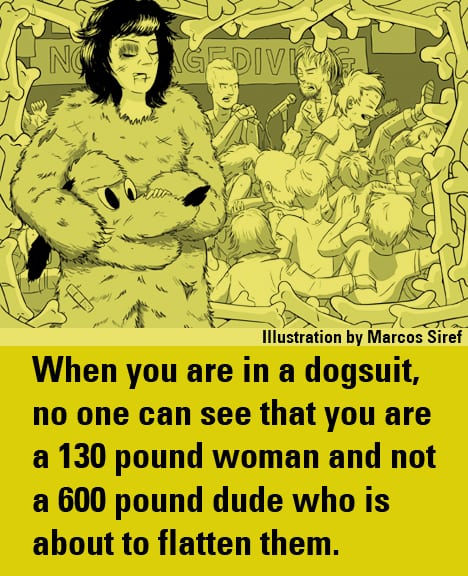 Is Anybody Out There? : a column that originally ran in Razorcake #76

This column originally ran in Razorcake #76. It’s available here, in all its printed glory. If you enjoy Cassie’s column and would like to support Razorcake, please consider a subscription to our bi-monthly fanzine.

I texted Chris to ask the question that had been on my mind all day: DOGSUIT OR LEATHERDADDY?

I had been wavering between these two Halloween costumes all week because I seldom had an excuse to wear either as much as my heart wanted. The leatherdaddy outfit was something I had gotten at a Goodwill a few years back. The heavy leather vest and chaps were marked $75. This was well beyond my budget, which generally ranged from broke to Are You Gonna Eat That?, but the fitting room attendant goaded me into trying them on.

“How are you gonna know if you don’t try? C’mon,” she said in a polite drawl, unlocking the door with a ring full of store keys. I am not superstitious, but I do believe in omens to the point where every day is like the episode of The Twilight Zone where William Shatner gets stranded in a small town with a fortune telling napkin holder that spits out vague, eerie messages. For me, the universe is full of these messages, and the fitting room attendant at the Austin Goodwill looked like my Ultimate Rock’n’Roll Future Self: a fifty-year-old woman with dark blue eye shadow and a teased blonde mane which looked like a pelt of thrift store Barbies dreaded into a Bret Michaels wig. If my Future Self was telling me to try on a leather outfit, then maybe my life was about to turn a corner.

I put on the gear and looked in the mirror, admiring the buttlessness of the chaps over my jeanshorts.

“Would you look at that? Just PERFECT!” gushed Future Me, putting a hand on a probably-replaced hip. “It’s like it was meant to be yours.” She was complimenting me in complete earnest, somehow blind to the fact that I looked like a female understudy for the Village People.

“I’m only torturing myself. Seventy-five dollars is way more than I have.”

“For you, I’ll make it fifteen. Better that outfit ends up on a young person than on a flabby old lady.” She shook her bicep, fanning a human sugar glider wing as an example. My Future Self knew how to bargain and was also realistically self-deprecating. If I ever made it to fifty, I hoped I would be just like this woman.

The dogsuit was a gift from my mom that I had had for almost ten years. When I opened the irregularly-shaped package on Christmas morning to see a shabby yellow mascot head, for the first time, I felt like my mother truly understood me. I wore it that day to Christmas dinner, in a music video for my band, once to a furry convention where I was the only person in an actual costume, and a few times to answer the door for Jehovah’s Witnesses.

You never can tell when you might need a mustard-colored dog to show up at a function, so I dragged the costume with me when I moved from New York to Oakland. The reply from Chris Fields, the guitarist for The Dwarves, cemented that the maiden West Coast voyage for the dogsuit would be The Dwarves’ Halloween show at 924 Gilman. The Dwarves had been my favorite band since I was fifteen, and they adopted me after years of being the kid in the front row at every East Coast show. Sometimes I ran the merch table, other times they asked me to impersonate their often-absent guitarist HeWhoCannotBeNamed by gyrating onstage in underwear and a wrestling mask. After the shows were over, we played Uno and went bowling. It was like being in a rock’n’roll Police Athletic League.

Even though it was the end of October, it was still humid in the Bay Area, so I carried the dogsuit on the walk to the venue, past little houses with the outside lights on and clusters of smoking teenagers. The guy at the door stamped my hand and I immediately ran into Chris and Marc, the guitarists for The Dwarves.

“Whoa,” Chris said, looking at the nubby, matted body draped over my arm like a dead muppet.

“Are you gonna put it on now?” Marc asked, looking at the head I held at my side the way a cooler person would hold a motorcycle helmet.

“Good idea,” he said. We talked for a while. Marc showed me pictures of his baby, and Chris told me about his girlfriend’s incontinent Chinese Crested Hairless dogs, which look like shaved chihuahuas trying out for a Nelson tribute band. The singer, Blag Dahlia, came over and I showed him the suit.

“Holy shit. How about you jump up during ‘You Gotta Burn’ and dance around in that thing?”

They left to set up gear and I waited off to the side of the stage, watching the crowd. I used to do the door at a club when I was in my early twenties. Then, I went to shows every free moment when I wasn’t working. It was the ultimate feeling of One-ness, all those people working out the grief of their childhoods and their part-time jobs in the heat of a loud, dark room, and everyone thinking the same thing: “This is what it’s all about.”

When you are an adult at a punk show by yourself, your mind can’t help but remember being nineteen and everyone getting a little freaked out by the old guy in the Black Flag shirt asking around if anyone needed a roommate. You remember the middle-aged woman who would sneak her daughter into shows, and the weird forty-year-old guy who still did a college radio program and wore Pixies shirts that were a little too tight. Most of all, you remember making an older friend a birthday card that said, “Thirty? You might as well be dead.”

Everyone at Gilman looked so young because they were young. Black shirts, tight pants, DIY haircuts, and a blue glow of people looking down, live-tweeting and instagramming every moment as it was happening. I had a trunk of 4x6 prints documenting feelings and places that don’t exist anymore. The club that closed because the owner had a cocaine problem. The car that broke down with all my records in the trunk, never to be listened to again. A blurry photo of an ex-boyfriend on his knees with a guitar in his hands and a lit cigarette in his mouth, because back then, you could smoke indoors. I had to wait for these to develop. I had to arrange them into albums. And now I have to lug them from apartment to apartment because I can never part with them.

The Dwarves started to play and it was the same as ever for me: the feeling of a thousand perfectly exposed photographs that live on in my head, where I am twenty and my boyfriend is a jerk and my parents are jerks but my favorite band is on tour and because of that, everything is alright. Where I am twenty-two and Marc stops me and says, “Hey, I know you!” and my heart nearly stops because my favorite band knows who I am.

Now I am almost thirty and I am putting on a dogsuit on the side of the stage at 924 Gilman. Like every other time I have worn this dogsuit, I can hardly see out of the crude eyehole cut into the head, but all those other times I have had someone there to hold my hand and guide me. Today, I am flying solo, a lone mustard-colored wolf, and I feel my way through the crowd, through the shock of angry teenagers screaming at an all-ages Halloween show, past the older people standing by themselves nodding, because that is all you can find the strength to do when you are old and at a show by yourself. I make it to the stage and Blag grabs my furry hand. He says something to the microphone that I can’t really make out because everything has become the distant sound of neighbors having sex through a wall. People cheer and I dance around a little. I shimmy. I shake. I do the dance the guy in the Mighty Mighty Bosstones does where he looks like he’s doing a slow-motion run from a cloud of bees, and then suddenly, someone reaches out from the crowd and grabs my leg.

I have never stage-dived, because there is never a valid reason to take a mindless leap onto a crowd of heads and faces, crushing all of the little people when they don’t reach up in time. Nobody ever wants a mouthful of butt or balls or shoes. Nobody is ever glad to be kicked in the face by a Doc Marten. Stage-diving is for people with health insurance. Stage-diving is for jerks.

One hand pulled me and two hands shoved me from behind and, suddenly, I was flying. No, I was falling. Nothing was visible except the crusty inverse of the inside of the doghead. There was a gasp from the crowd and I landed.

There were four seconds of all-consuming blackness and then another pair of hands, pulling me up. Now standing, I pulled off the doghead. When I looked up, I saw Chris and Marc, gave a weak thumbs up to indicate I was still in control of my motor functions, then bitterly surveyed the people in my immediate vicinity who hadn’t caught me, though I couldn’t blame them because when you are in a dog suit, no one can see that you are a 130 pound woman and not a 600 pound dude who is about to flatten them like a lost cat in a hoarded-out house.

The last song finished. I shook off the now-filthy dogsuit, holding the head at a distance because it was soaked. I walked to the exit, wondering if the crowd would have caught me if I had gone as a Tom of Finland biker, wondering what the middle-aged woman who sold me that outfit was doing now, wondering if I was getting too old to be falling on my head in a dogsuit at a punk show, muttering these sorts of questions to myself in a concussive existential freakout.

Then I heard someone shout and I turned around. It was a fifteen year-old boy standing with a group of friends, smoking cigarettes across the street.

“You look really hot without the dogsuit on!”

I smiled, my walk of shame turning to a victory strut as I headed back toward the car to listen to music at a sensible volume and think about what kind of Future Self I was turning into.