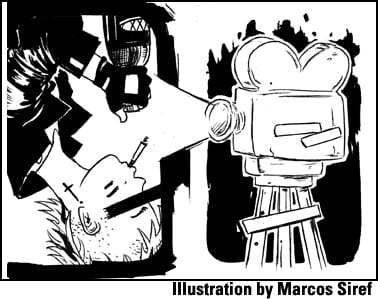 Interview with Zack Carlson of the book, Destroy All Movies. By Billups Allen

For anyone who has ever paused a video during a record store scene to see which albums were on the wall of the record store or rented a movie because Lee Ving was in the cast, there is now a book that obsessively documents the phenomenon of punks making appearances in film. Writer and film programmer Zack Carlson along with Bryan Connolly and a handful of helpers participated in a seven-plus-year project of screening films from the ‘70s, ‘80s, and ‘90s, pursuing the actors and filmmakers who produced an eclectic mix of films, and compiling their research into a book that categorizes appearances of punk rockers in movies. Everything from seminal documentaries, punks playing people, actors playing punks, and minor crowd shots are acknowledged in Destroy All Movies!!!: The Complete Guide to Punks on Film. The book acts as a film guide that archives these flashes through short reviews and a series of interviews with players and filmmakers who put punk rock in both Hollywood and underground movies. Zack Carlson talked to Razorcake.