Interview with Wayne Kramer: Different Than What Ran in Razorcake 82 By Jeff Proctor

Brother Wayne Kramer found himself selling drugs on the streets of Detroit to get by following MC5's breakup. Law enforcement had already targeted the group for its radical politics and Wayne quickly found himself in trouble, busted in a deal with undercover DEA agents that sent him to Lexington Federal Prison for two years.

While locked up at Lexington, Brother Wayne—whose musical world was already inspired by the likes of Sun Ra and John Coltrane—met and took musical instruction from Red Rodney, who had been a trumpeter in the Charlie Parker Quintet. Wayne came away with a richer, deeper understanding of music under Rodney's tutelage, along with the ability to play completely free—free from the conventional constructs of music. With this musical freedom comes the requirement that players play with sympathetic ears, opening a dialogue with their instruments.

Brother Wayne revisited his time at Lexington Federal Prison with this year's album, Lexington, which stands as a tribute to his time there and to the free jazz greats who inspired him. Its his first album entirely comprised of jazz compositions.

He's also keeping busy with scoring work for film and TV. Wayne was hired in 2006 to work on the musical score for Talladega Nights, a movie starring Will Ferrell and co-written and directed by Adam McKay. His standout work there led to additional work on a number of other Ferrell and McKay projects, including Eastbound and Down, Step Brothers, and Anchorman 2. This working relationship would turn into a close and personal friendship for Kramer and McKay, with McKay even holding a seat on the Board of Directors for Kramer’s non-profit, Jail Guitar Doors.

Interestingly, there's a Nardwuarian twist between Wayne's film scoring work and another musical project he was involved in many years ago.

Kramer was living in New York following his release from prison and became involved in the punk rock community that formed during his time in jail. He first played in the short-lived Gang War with Johnny Thunders and in 1981 Kramer (along with MC5 drummer Dennis Thompson) was invited to record the “Gimme Some Head” single with GG Allin and the Jabbers. The song later appeared on GG’s Hated in the Nation record, the title of which was later borrowed for the 1993 GG Allin documentary Hated, directed by then-NYU film student Todd Phillips. In an interesting game of connect-the-dots, the GG Allin documentary was the first full-length film made by Phillips, who would later go on to find success directing Will Ferrell in Old School, who is the writing partner of Adam McKay, who sits on the board of director’s for Kramer’s Jail Guitar Doors.

What follows is an interview with Wayne Kramer that is completely different from the one that ran in Razorcake #82. 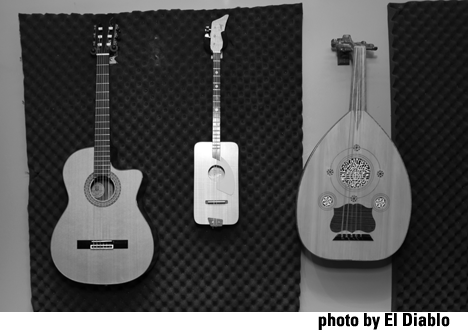 Jeff: I’m going to back up and change topics a little, but when you got out of prison you moved to New York City. And there you started a band with Johnny Thunders and then shortly after that you were in GG Allin’s band.

Wayne:Well, I did some recording sessions for him (GG Allin). I wasn’t actually a—what did he call the band?

Wayne: I wasn’t actually a full-fledged Jabber. [Laughs] I was just a hired hand.

Jeff: In the punk rock mythologies, they’re both very large-sized personalities. Can you talk about what it was like to play with them, the professional relationship, what was it like to work with them?

Wayne: Sure I can. When I knew him (GG Allin), he was just a really enthusiastic rock guy. He loved music and he loved his band and was in love with the songs he was writing. Was thrilled to have me there. He said I was one of his heroes. I’m happy to play with him, I’m a player. Players play. I wanna play. He wants me to play and I’m happy to be there. And I just thought this kid, you know, he’s got the enthusiasm that it might carry him somewhere. He had not yet become the bizarre performance artist that he became later. And you’re right, he was incredibly compelling. I just watched that footage the other day of that last gig and him walking up the streets and everything. He was conscious of what he was doing. He knew he was being provocative. In his drugged and drunken delirium, he still, you could tell by the way he was reacting to what was going on in the street—he was clocking everything. I think his death was an accidental overdose. It happens a lot. He was just a bright eyed, bushy tailed young rocker kid when I met him and did the recordings for him.

Jeff: And on the recordings, it was you and Dennis Thompson (drummer for MC5)…

Wayne: Dennis was in a different city. I think they might have cut his stuff in Detroit and cut my stuff in New York.

Jeff: To get back to Jail Guitar Doors, Adam McKay (co-founder, with Will Ferrell, of Gary Sanchez Productions who together were writers and producers of Anchorman, Step Brothers, Talladega Nights, etc.) is on your board of directors. 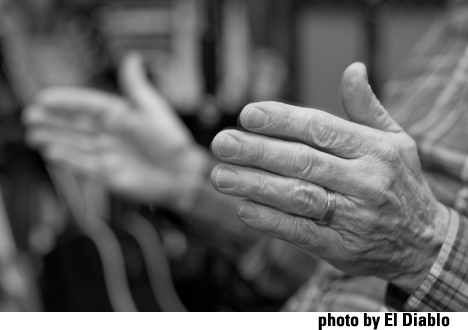 Jeff: And you have done the music or scoring for a number of his projects, Talladega Nights, Step Brothers, Eastbound and Down…

Wayne: And I have a song in Anchorman 2.

Jeff: How did you get hooked up with him?

Wayne: In post-production for Talladega Nights, they had another composer on the movie. But, they weren’t happy with his rock work. They wanted real rock. The music supervisor on the movie was the great Hal Willner. Hal said, “You want aggressive guitar rock? You should call Wayne Kramer.” And Adam said, “Do you think he would do it?” And Hal said, “Call him up and ask him. You know he lives here in town.” So they called me up and they said, “We’re working on this movie. Would you come over and talk to us about some music?” And I said, “Of course!” And I found out that Adam and I are like peas in a pod. We have the same kind of left-of-left political world view. And we just found we really enjoyed each other’s company. So I did the work on that movie and I scored all the racing scenes. He was very happy with the work. And so he still hires me from time to time to help out where he thinks my skills are usable. We’re best friends. We have been all these years. We go on vacations together. I absolutely adore him and his family.

Jeff: The new record that’s coming out is coming out on Record Store Day. Can you tell me about the new release?

Wayne: I signed a thousand copies of it! It took me all day. It’s interesting to be back in the record world now that the dust has kind of settled. I don’t think it’s completely settled, but it’s kinda settled, because a lot of the things that we used to do are still there. The marketing, press, distribution, parts and, of course, the whole creative side—writing and arranging, recording and mastering. But, it’s all different. All the elements are the same, but everything’s different now. We’re just doing a thousand copies of the vinyl and from there people can download the record. If you want to buy a CD, Amazon makes them as they sell them. They’re fulfilled on order. Somebody buys it, they make it. So, you don’t have a warehouse full of records. You don’t have returns. It’s brilliant, actually.

Jeff: The recording of the album, can you tell me a little about that? Did you guys record it here (the studio we’re conducting the interview in)? 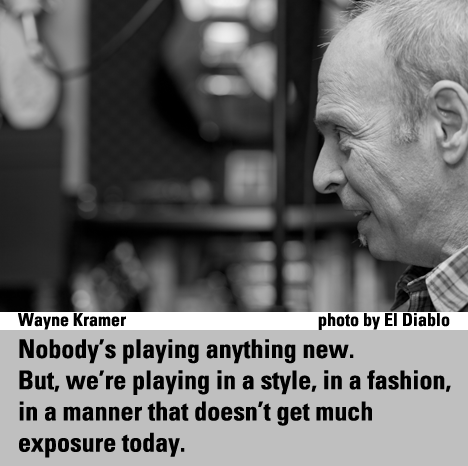 Wayne: We wrote the record here, me and Charles Moore. We recorded it out at a studio called the Woodshed in Malibu that’s owned by the film composer Richard Gibbs. Beautiful setting overlooking Malibu Bay. And it’s all live musicians playing music together. There’s no loops; there’s no samples. There’s actually no “new” music on it. There’s nothing new there. Nobody’s playing anything new. But, we’re playing in a style, in a fashion, in a manner that doesn’t get much exposure today.

People have the incorrect idea that free music means you just play whatever you wanna play. And it means just the opposite. To play free you have to be totally disciplined. It’s very difficult because all the rules of music still apply, except you’re not constrained by the beat, and the key, and the chord progression, and a melody. But, everything else still applies. You have to play with the other musicians. You have to play what’s appropriate to what they’re playing. You have to recognize when to play something that’s sympathetic, and then know when to play something that’s in contrast. Everyone has to pay more attention. It’s harder to play without rules. But, the musicians I worked with on this all know how to do this. And many of us have been doing it all our lives. And we love playing in this way, because nobody knows what’s going to happen. I wrote a portal, a pathway into the real playing and a pathway out. Otherwise, let’s see what happens. Sometimes I might have said the piano takes the lead and the trombone will go here and guitar will go here and trumpet and guitar are the two features on this section. But, generally, it’s kinda like casting a movie. You just hire the right actors, give them the script, and then let them run with it.

A full, completely different interview with Wayne Kramer is here.