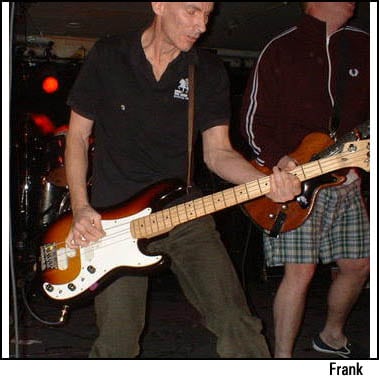 Interview with Unnatural Axe: The Boys Can Still Bring the Rock By Adrian Salas

One of the greatest regrets of my life (and believe me, there are many) is that I didn’t ever get to see any of the first wave of Boston punk bands “back in the day.” I was old enough, I was close enough, I just wasn’t aware enough. Fortunately for me, and for anyone else who either missed out or was too young or too far away, bands like Unnatural Axe are still out there doing it. The intensity and excitement might not be quite the same (after all, both the band members and their audience are quite a bit older now than they were in 1978), but the tunes are still great and the boys can “still bring the rock,” as my friend Eric Law likes to say. I recently had the pleasure of seeing the Axe perform in Cambridge at the Middle East club. Shortly after that, I received a copy of their new DVD, You’ll Pay for That, from lead guitarist Tom White. After watching the DVD, which includes live footage from throughout their career, as well as some home movies from the weddings of all three remaining original members, I conducted this interview with Richie Parsons (vocals/rhythm guitar), Tom White (lead guitar), Frank Dehler (bass) and Jack Clark (drums).

Brian: How did Unnatural Axe first come together?

Tom: Richie and I started up as a punk duo around 1977 and soon found bassist Frank Dehler at Berklee School of Music. We found drummer Dom DeYoung working in a garage. Perfect! By mid 1978 we had released our four-song EP and, with the help of our new drummer Tommy Taylor, we firmly established ourselves in the Boston/N.Y. club scene.

Brian: In the DVD, Richie talks about the band splitting up over something like “artistic differences,” but then getting back together. Tell me about that.

Tom: Richie and I started out at the same place but after two years and over a hundred shows we found ourselves at different points in our lives. I guess we needed a break to try different things and eventually found we could work things out and play as the Axe again. We broke the band up around mid 1980 and returned in 1982 with drummer Roger Tripp (from La Peste.) 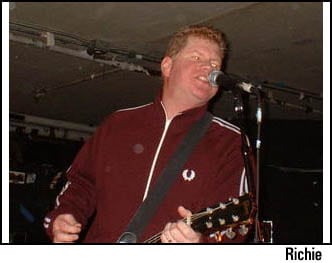 Brian: And never looked back?

Tom: By the mid ‘80s we found our songs bootlegged in Australia and recorded by new bands in Europe. Sometime around then a promoter from Detroit found our record and asked us to come out there and play. We’ve been out there four times since playing shows with The Stooges, Cheetah Chrome and John Felice. In 1997, we released our first CD on Lawless, which was also put out in Finland as a vinyl LP (Unnatural Axe Is Gonna Kick Your Ass!), and with the addition of Jack Clark on drums, have continued to play.

Frank: Well, nationally, the Cars were just hitting. On the local circuit, I looked up to bands like the Real Kids and the Nervous Eaters (to a lesser extent) who were a generation (i.e., a couple years) ahead of us. LaPeste, whom we played with frequently, was a powerful influence on me. Human Sexual Response was also quite big at that time, and then Mission of Burma emerged in 1979. DMZ, a bit earlier, I’d have to mention, too. The Axe, particularly Richie and I, were quite young at the start. The Real Kids, the Eaters, and LaPeste, seemed to me back then like possessors of some secret knowledge, not just of music, but of life.

Brian: Frank, from what I’ve heard, you were a pretty intimidating character “back in the day.” Were you actually dangerous, or was that more of an act or an attitude? 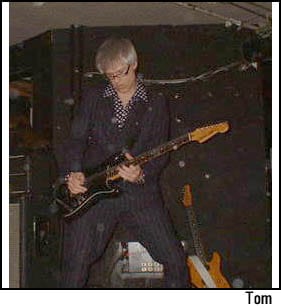 Frank: A little bit of each, I reckon. To some extent, being intimidating was a defense against being intimidated, particularly at the start. It certainly was part of being punk and establishing credibility, not that I ever considered myself a true punk or really embraced the “lifestyle.”  I also had an inordinate amount of anger back then, mixed with substance abuse, so there was plenty of fuel for the fire. The band was a perfect vehicle for expressing the rage, lust, spiritual aspiration, and personal ambition I felt.

Brian: I understand rage and lust, but what do you mean by “spiritual aspiration”?

Frank: I guess I mean what was an inexpressible striving for something transcendent, or just a way to express feeling and emotional conflict musically in a way that moved and motivated others, all bathed in an adolescent testosterone rush. I remember those early Axe performances as pretty cathartic.

Brian: Seeing Unnatural Axe live and in person in 2006, and then watching the DVD with footage from twenty-five years earlier, the biggest difference seems to be in the level of audience reaction. Do you think that has to do with the fact that the audience is largely older than it was then, or some other factor?

Richie: We play better, harder and faster (thanks to Jack), and our fans just ain’t teenagers anymore.

Jack: Better is all Frank; harder and faster. I have depth perception issues and no sense of timing.

Tom: I don’t know the exact formula, but some if it may be related to the height of the stage and the age of the crowd. A while back we played at Doc Ryan’s Pub in Salem for a crowd that was young and wild, plus the stage was low enough to encourage audience participation and it was nuts. Back in the day, we really needed a big reaction or we would think something was wrong. We still have the insanity inside us, but now we can let it smolder instead of taking us over. Richie, Frank, and Jack are top level players and just being up there with them is a privilege and a challenge. I’m just happy just to be there with them and my aim is to make a good show of it.

Brian: I read somewhere that when you guys opened for The Police at The Rat, Sting accused you of “pooping” while you were backstage together. What was that about?

Brian: What did you say when he said you did it?

Richie: I said “Fuck you. You farted.” 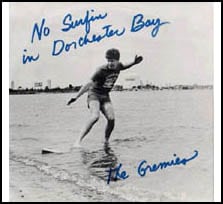 Brian: You’ve had a number of other bands through the years. One of my favorite songs of yours is “No Surfing in Dorchester Bay” which you did with the Gremies. (For people from other parts of the country, Dorchester is suburb of Boston. Dorchester Bay is a very protected bay, with virtually no waves.) Tell me about that band.

Richie:  The Gremies were me, Frank, my brother Moose, Ralph Fatello (Vinny Band), Howie Ferguson (Real Kids) and Monoman (DMZ, Lyres). We played live only one or two times and then died in a plane crash over the Neponset River in Dorchester. The best story is when we played our second gig we were “headlining” over the Lyres and Mono refused to go on stage with us. We left the organ set up and Ralph officially banned him from his sight. Mono left, and at clubs for some time after that if Ralph saw him, Mono would scoot away.

Brian: Tom, you’ve been in a few other bands, as well.

Tom: Here’s the breakdown: The Fabulous Billygoons. With Dr. Krull and Lester Miserable I put together an eighteen-piece comedy orchestra which dabbled in R and B, rap, country and western and ska. We got airplay on WBCN and Dr. Demento with our hits “The Billygoon Party Rap” and “The Goons Are Drinking Again.” The Goons were regular players at the Spit nightclub and our career highlight was opening up for The Specials at the Bradford Hotel Ballroom. Check out our video deemed “Too Hot For MTV” at www.kinodv.net/movies/moviepages/Billygoons.html. We released one 12” E.P. on Modern Methods Records: The Fabulous Billygoons - Rhapsody in Flatulence.

The Mighty Ions: After The Axe 1980 breakup I was asked to join GG Allin’s band. Well, GG never showed up but I joined up with his sidemen and writers from his first album to form a rockin’ band. Our hit turned out to be a spoof on a Dead Kennedys’ song called “Pedro Morales.” We released our CD in 2000 on Dino Records entitled Face Rakin’ Rock: http://www.dinorecords.com/.

The Beachmasters: I played keyboards and bass in New England’s premier surf band of the mid-’80s, featuring the East Coast King of the Surf Guitar, Ken Kaiser (from The Afrika Korps/The Korps). The band played from Canada to New York and always had work as a frat party cover band at colleges, corporate parties, and festivals. They also had a pile of originals to play at places like Geno’s, Chet’s, Green St. Station, and the Rat. We recorded one album in 1988 on Kleen Kut Records simply entitled The Beachmasters, produced by Sean Slade.

Brian: What’s in the future for Unnatural Axe?

Tom: Funny you should ask because we are heading to the studio this weekend to work on a new song and a few other things.