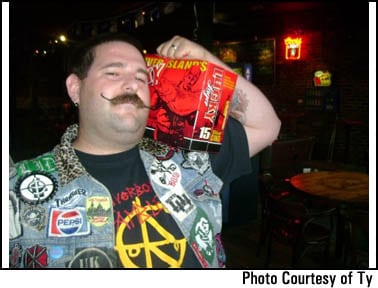 Lauren: Ty; has writing reviews for Razorcake earned you more thank you notes or hate mail?

Ty: Surprisingly, I’ve had more thank you notes although I have a sneaking suspicion that Todd holds back the hate mail.

Lauren: How do you write a review of mediocre material without your review itself ending up being mediocre?

Ty: When it comes down to it, the really good records and the really bad records are easy to review. It’s those “so-so” records that are troublesome. I usually try to be funny with varying results.

Lauren: Your band, The Hoosegow, has been together for six years now, so are you guys pretty serious about touring and putting out albums in this stage? In all the years you’ve been playing music, what has felt like your most memorable achievement?

Ty: The Hoosegow is a bit strange in that we do practice and play local shows a lot, but some of us have family and job commitments that keep us from any extensive touring. We usually get out on the road for a couple of weeks every summer and record every couple of years. It’s not really an achievement, but one of the greatest feelings there is would be playing at an all-ages show and it’s full of kids screaming along with songs that aren’t even recorded yet. I love that!

Lauren: Living in Canada means that you have to pay extra postage for American records and that some of your favorite bands might get hassled at the border and not make it to play a show in your town; what about living in Canada makes up for that?

Ty: Clean air and strong beer! Also, since there are a lot of long drives between major cities, the local scenes thrive. A friend of mine from San Diego was here in the spring and was amazed that for how small Victoria is (pop. 330,000 or so) that the city is full of punk rockers. There is lots of shows and they are well attended. However, most important thing about Canada is poutine. Poutine is the greatest food there is. For those who don’t know, it is french fries covered in cheese curds and smothered in gravy! Try it once, and you’ll want to move here!

Lauren: Being a screen printer sounds like a dream job for people who are into DIY because you get to make a mess and work with likeminded people. Was it hard to find work doing screen printing and what are some things about the job that people don’t know about?

Ty: I think that screen printing is the ultimate DIY job. I built my fist set up in the basement when I was fourteen, and have been printing ever since. The reason it seems to attract so many punk and metal people is that it doesn’t matter what you look like because you’re out in the shop. Also, you get to apply a combination of artistic and mechanical skill all the while getting your band’s stuff done cheap! I think job availability depends on where you live. I haven’t had a problem finding work in the industry since the mid 90’s. One thing that some may not know is that screen printing is extremely hard on your body if you do it for a long period of time. My back, knees, elbows and wrists hate me!

Lauren: I’m thrilled that you mentioned your four- year- old daughter, because I work with kids (ages 5- 12, in an afterschool program) and there’s so much cool stuff to talk about regarding children. First, what’s your immediate reaction when somebody says “Oh, I don’t like kids,” and does it seem to you that punk rockers are especially likely to be prejudiced against little ones?

Ty: I don’t hold it against anybody if they don’t like kids. I spent a large part of my life convinced that I wouldn’t be a parent. Not because I didn’t like kids, but I didn’t think it was fair to bring one into a world like this. I changed my mind because it came to me that if everyone who felt that way stopped having kids then the world would just get worse. Now I have the opportunity to teach my daughter how to make the world a better place. I can’t really say that punk rockers are more likely to be prejudiced towards kids because here in Victoria, there are a large number of us that have children. There are lots of punk rock family barbeques in the summer.

Lauren: On the flip side of that, it’s really annoying to be lectured on “how kids are.” (First- year education majors with no real world experience tend to do this to me.) What’s the most aggravating parenting advice you’ve been given and did it come from your parents?

Ty: I think both my Wife’s and my parents learned early on that we are not going to put up with bullshit. I think that one thing at annoys me is when they say “she’s so skinny”. The fact is, she is normal sized. If she is hungry, she eats. No need to force food on her.

Lauren: What qualities did parenthood bring out in you? Are you more of a feminist now that you have a daughter? Newly in touch with your inner child after spending time playing make- believe?

Ty: I’m pretty sure that my inner child never left! Sophia and I are often collaborators when it comes to superheroes and cartoons. I wouldn’t say that I am any more a feminist than I was before I was a parent, but I have definitely become aware of the disgusting and unrealistic body image and whoreification that society is pushing on children. It’s hard to explain to children and some adults why we refuse to allow those kinds of toys/shows into our home.

Lauren: Tell me your favorite...children’s book:

Ty: Where The Wild Things Are

Lauren: Thing to do at home:

Ty: Draw and sing with Sophia

Ty: ummm… I got swamped with work.

Ty: Losing yourself in it. Not really remembering the set you just played, but somehow knowing that it went perfectly.