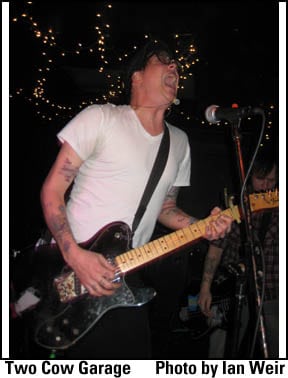 Two Cow Garage would be the biggest band today if all it took to become rock stars was enthusiastic praise from blogs, zines, fans, and fellow musicians. The Columbus, Ohio four-piece blends passionate songwriting with a punk spirit and the sonic firepower of a band with twice as many members. Two Cow Garage has spent the past decade slowly forging their own sound out of their alt-country humble beginnings, assembling one of the most thunderous live sets you will ever see.

The band continues to tough it out on the road, taking occasional breaks to catch its breath and release albums that get consistently stronger. Many bands have succumbed to life on the road and given it all up because it’s the easy thing to do. Some have no choice but to forge ahead, especially when there’s more to say and the songs come as natural as blood, sweat, and tears.

Most bands are lucky to have one person with the ability to write songs that can, at one moment, force arms raised with clenched fists and at the next moment have those arms wrapped around someone you care about. Two Cow Garage has two such songwriters. With the obvious difference between the two being Micah’s rasp and Shane’s growl, each can craft a tune that tells us things about ourselves and the world around us that we rarely consider or take the time to think about. The two have surrounded themselves with bandmates who are more like brothers-in-arms that only make their music better.

While Two Cow Garage calls Columbus home, I’m certain that there are a number of cities across the U.S. that have adopted them as one of their own. And who can blame them? They’re one of the hardest working bands I know made up of four unassuming, self-effacing guys who pour their guts into making music because it’s what they do best. So go check them out when they’re in town. Chances are that it’ll be real soon.

Ian: How are Two Cow Garage the “Cliff Clavens of Rock’n’Roll?”
Shane: I am known as the Cliff Claven of Two Cow Garage because I have random facts that I will spew at anybody at any time. For instance, there is a poster in the bathroom for a show for the band Orgone. The font used in that poster is called “Mexico City” because of the Mexico City games. It was the font they used in 1974. Orgone is also this thing where this guy decided that there was some sort of orgasmic energy that comes from the Id that he could channel in this machine and it’s called the orgone accumulator.
Cody: I honestly don’t think anything Shane said right now is real.
Shane: It’s totally true.
Ian: How has your relationship with Suburban Home Records impacted the band?
Micah: We love them to death and Virgil Dickerson is a fucking wonderful human being.
Cody: In a way, he’s like our pimp. We work for him, he asks us what we need, and he gives us what we need. It’s a perfect, symbiotic relationship. Occasionally, he slaps us around.
Shane: It really is great because we go out and work our asses off and Virgil does everything he can to promote us. He would probably give someone the shirt off his back if it would make them care about our band. 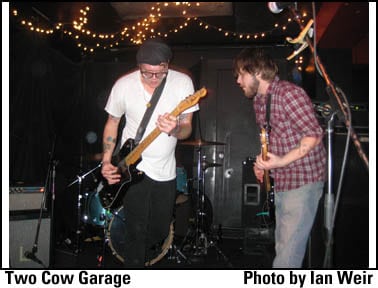 Cody: Virgil would take some wang for Two Cow Garage. And he has.
Ian: Is the band self-supportive these days?
Shane: Yes. We have been for a while now. All of us worked our fucking asses off to be where we are today. To be self sufficient. We go on the road, we come home, and we make money. I’m not going to be apologetic about that. That’s a fucking brilliant thing because we all do this for a living.
Cody: The ironic thing is that we’re one big tour away from not having to do any more interviews. This is very exclusive.
Ian: Andy and Cody are the newest members of the band. I read an article that described Andy as, “Just like the other guys, maybe just creepier.” Cody comes from more of a punk rock background. How has adding a punk and a creep helped evolve your sound?
Andy: Think about it this way: what if pee came out like cum?
Cody: I think Socrates asked that first.
Shane: We all come from very different musical backgrounds, and it’s those divergent paths that make us a cohesive unit. Cody hears things differently than I do, and Andy hears things differently than Cody. Some of the time it’s butting heads, but most of the time it’s working toward a common goal.
Micah: It’s four fucking people making music together.
Shane: Making music note babies.
Ian: You’ve worked with producers and engineers like Brent Best from Slobberbone and Matt Pence from Centro-Matic when recording earlier albums. As you become more comfortable with your sound and music as a band, do you feel as though you’re able to take more control of the recording process?
Shane: Everything’s a learning experience. At some point Devo was, like, “We don’t know what we’re doing here and needed mentors and people to help them figure it out.” And now we’re at the point where we can be mentors to other people.
Cody: I think everything has been right, as far as the progression with our albums go. I think on this last record we were in a really good spot where the approach to writing, rehearsing, and recording the record all came pretty naturally.
Shane: We recorded this record with buddies in a barn, which was pretty awesome. It sounds like us in that moment, which is what I think it’s supposed to sound like.
Ian: How does touring make you a better band?
Shane: You have to play every single night and you’re literally singing for your supper. Sometimes you’re in a room full of some of your best friends. Sometime no one gives a fuck about you. You have to convince people to care. For those who have seen us before, they need something else. They need something special, which we try to give them.
Cody: Not many people are cut out to do this and I think it makes us more well rounded. Being in a band, we have the lowest lows and the highest highs and everything in between. Sometimes it’s rough. some nights it’s fucking bliss and we’re playing great shows in front of great people. A lot of people wll never experience that.
Ian: Does touring equal momentum?
Cody: Yes.
Shane: Absolutely. It’s like the Buddy Holly story. The record label people wanted him to hit the road and he’s like, “I don’t want to die.”
Micah: And he died.
Shane: The only way to sell records is to go on the road and promote them. And he died.
Andy: I’ve never heard this story before. Who are we talking about again?
Shane: It was the Gary Busey story. But it’s the truth. The only way to get your music to people is to go to them. People might buy your stuff and give it a listen. They might care about it and they might not, but there’s an interaction that takes place during a live show. On any given night we try to capture people’s attention and tell them, “You will care about this because we’re going to make you care about it.”
Ian: You’ve done a number of dates with well-known acts like the Hold Steady and Lucero. Do you try even harder at shows like that to blow bands off the stage?
Micah: Not really. We give the same effort every time we play.
Andy: Whether it’s five people or five hundred people. You never know when you’re going to go, and I want to go out with a fucking bang.
Cody: We have no business doing this if we’re not going to do it the same way every night. If we just wanted to be in a cover band, we’d go do that. I don’t think any of us know how to mail it in. It’s like Sammy Hagar said, “There’s only one way to rock…I like Cabo Wabo.”
Ian: Is that a direct quote?
Cody: I believe so, yes. 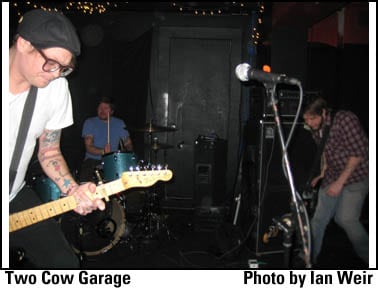