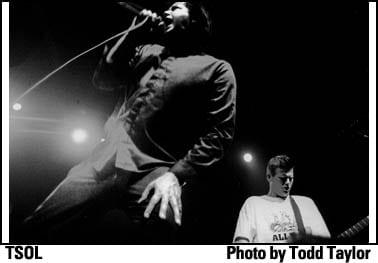 Interview with TSOL: This interview originally ran in Razorcake #04, 2001.

The members of TSOL found themselves at the wrong place at the wrong time shortly after their interview with Reflex. In 2002, while playing at the House of Blues on the Sunset Strip, two men were shot backstage. Both survived, but TSOL was held partially responsible and slapped with an exorbitant attorney fee that took years to pay off. In 2003 they released, Divided We Stand, featuring Greg Kuehn back on keys. The lineup also included Billy Blaze on drums and legend David Bianco on percussion and guitar. Kuehn has spent his time working on television and movie scores as a composer. His company, Peligro Music & Sound, has a reputation for quality production. His laundry list of credits and clients include, Duane Peters; Morgan Spurlock’s documentary Confessions of a Superhero and We Were Feared; and a documentary on the infamous Cuckoo’s Nest where TSOL, XTC, and The Damned played in the ‘80s.
Jack Grisham threw his hat in the ring when he decided to run for governor of California in 2004. Grisham rationed he was tired of complaining about government and decided he should act to change it, dispelling the idea he was reneging on his “fuck the government” stance. His campaign highlighted the environment, universal health care, and immigrant rights. Sadly, Jack didn’t garner enough votes.
Who’s Screwin’ Who? was released in 2005 on Anarchy Records. This best-of live comp mixed the old with the new such as “Code Blue,” “Dance with Me” and “Fuck You Tough Guy.” In 2006, Nitro re-released Dance with Me and Mike and Ron moved from Southern California to Las Vegas and Ohio. Mike has been operating out of Carey Hart’s tattoo shop, Hart & Huntington, in Sin City’s Hard Rock Hotel. He continues to collect custom tattoo guns.
In 2008, drummer Tiny Bubz, formerly of (hed) p.e. and The Cadillac Tramps joined the lineup and a year later TSOL released, Life, Liberty and the Pursuit of Free Downloads, through Hurley’s website. The skate, surf, snowboard giant hosted video blogs on the site, chronicling the making of the album. Opting to make the new tunes free, the boys urged those to donate to their favorite charities like the SPCA, The Orange County Food Bank, and Midnight Mission. They toured for the album, playing in NYC for the first time in six years to fans old and new.
2010 marked the year Ron released his first debut album, Walk the Walk, which spanned over twenty years of songwriting and included a who’s-who list of punkers: Mike Ness, Dexter Holland, Tim Armstrong, and bandmates, Jack Grisham and Mike Roche. Ron spent the better part of that year touring to support his album.
In 2011, Grisham released his first book, An American Demon: A Memoir, which steers clear of the predictable road to redemption of drug-addled rock star autobiographies. Jack instead told his story from a fiendish, first-person narrative disregarding chronology like Henry Miller meets Bukowski. Grisham is a licensed hypnotherapist and practices in Huntington Beach, California. He regularly holds seminars on topics from quitting smoking to meditation. While all members have their own set of projects, each attests to their commitment to TSOL.

I remember sitting in my bedroom when I was about sixteen or seventeen listening to the first TSOL EP over and over. I had a stereo that would automatically replay records and because the 12” was a 45RPM it kept dropping the needle in the middle of the disc. I had gone into the kitchen to get coffee and, apparently, the record player arm kept dropping on the “America / Land of the free / Free to the power of the people in uniform” lyric. When I got back to my room, my mom had taken the record. “If I had to hear that damn ‘America, land of the free’ line again I thought I would smash this record.” It had repeated about eighteen times while I was in the kitchen and she was hearing it through the walls. Mom hates = is good. Later, when Frontier’s Lisa Fancher, who was about to finance the first Adolescents record, asked me if there were any bands I would recommend she record, I told her that I thought the best band around was TSOL.
For the next year, our two bands would play a handful of amazing shows together—the Vex and Devonshire Downs stick out in my head—and I went absolutely bananas over their sound. Jack, besides being incredibly funny, has one of the voices I admire most; Ron has a signature style, something most guitar players never achieve regardless of ability; and Mike has always been the kind of focused and dedicated bass player that I compare bass players to when I’m looking for my own bands. The bass player is the cement in any building, I promise. Without a guy like Mike, you’ve got a house of cards—it may be a good hand, but they’re coming down.
I’ve followed the band members through their various projects and have remained fond of them as individuals and as musicians. They are, individually and collectively, amazing dudes.
I had the opportunity to follow them to a few shows this summer of 2001 and was jazzed to see them looking so up. Jack and roadie Raybo {who doubles as the singer of Bonecrusher} gave my five-year-old daughter orange juice like the total dad hosts. Ron’s big brother Bob was out, and no surprise, just as cool as I always remember him. I met Jack’s daughter, who I had only seen as a baby picture in his wallet years ago when Tender Fury and the Flower Leperds played together. She was every bit as charming as her dad. Twenty years ago I could have never imagined the shoes we would wear. The shoes look good.
TSOL is currently touring for its album Disappear, which is an amazing blend of vintage TSOL and influences that range from Gang Of Four, Magazine, and the Buzzcocks to Siouxsie And The Banshees and Adam And The Ants. Great stuff. TSOL was interviewed July 20, 2001 in their mobile unit outside of the Ventura Theater in Ventura, California by Tony Reflex, Steve Godfather” Martinez, and my man Todd. Todd took a bunch of pictures and was especially trick by carrying around the official camera backpack.

Interview by Tony Reflex aka Tony Adolescent and Todd Taylor 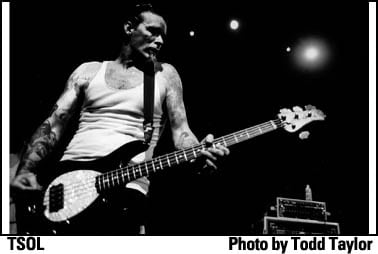 END NOTES
{1} Bergamont Station/Track 16 is an art museum in Santa Monica, California. From April to June 1999 an exhibition curated by Exene Cervenkova and John Roecker called “Forming: The Early Days of Los Angeles Punk” took place, which chronicled part of the Los Angeles punk rock scene. The exhibit culminated with a concert which featured an array of bands which included Devo, X, Weirdos, Plugz, Adolescents, F-Word, and TSOL among others. Bootleg videos are floating around as well as a never-to-be-released feature film. This would be the last major rock performance by Rik L. Rik.
{2} The set at Bergamont Station was great. The place turned into a zoo. There was total bedlam. Mike Rouse, a local musician who owned some of the stage equipment used, got his nose thumped. He took it like a trooper and later commented that he’d expect no less from a great TSOL show. TSOL would play less than a week later at Fletcher’s birthday bash at the Key Club with the Adolescents as a support. A bootleg video is floating around.
{3} Thom Wilson recorded Dance with Me and Beneath the Shadows for TSOL, the self-titled Adolescents LP, and Welcome to Reality EP. He disappeared—no pun intended—for a while and was looked up by the Offspring to record Smash. He was the engineer on the new TSOL release.
{4} In a very confusing TSOL dichotomy, there are actually two distinct bands who have used the name TSOL. One ran from 1980-1983, and the other from 1984-1991. The latter band, fronted by Joe Wood, retained legal claim to the name. The first lineup began to reclaim the name after 1991 and has been caught in periodic haggling with the latter up until recently.
{5} Steve Martinez worked at Triple X records from the mid-’80s into the early ’90s. He was the in-house artist and did graphics for a number of Triple X releases at that time, including work for TSOL and Tender Fury.
{6} My favorite was an early misprint in a fanzine which dubbed them True Sons of Liberty, which had a Guns of Navarone feel to it....
{7} Pat Brown was a staple at many early shows and parties in the beach area. He was the same Pat Brown of the early Vandals anthem “The Legend of Pat Brown.”
{8} In 1980 I traded Mike a Mickey Mouse T-shirt for a TSOL shirt. It was one of twelve the band screened. Rikk Agnew is wearing it—actually borrowed from me and never returned!—on the back cover of the blue Adolescents LP. Gimme back my shirt, Rikk.
{9} Dirk Wears White Sox by Adam And The Ants.
{10} Chaz Ramirez was the owner and engineer of the Casbah Studio in Fullerton. Beside playing bass in Eddie And The Subtitles and collecting vintage vacuum cleaners, Chaz recorded a number of Orange County bands, including Social Distortion, Adolescents, Eddie And The Subtitles, Pontiac Brothers {the band that introduced us all to the Doll Hut}, Jack Grisham, Flower Leperds, Berlin, and a million others. Chaz, the consummate worker, fell through an acoustic ceiling while pulling out some electrical wiring he was going to use for his studio and died from head injuries sustained in the fall three days later. Mike Ness and Dennis Dannell later bought the studio in order to keep that piece of rock and roll history going. Its current status is unknown.
{11} Thunderbird is a cheap fortified wine. Prior to his abstinence, Chaz would drink “shortdogs,” which were the smaller bottles.