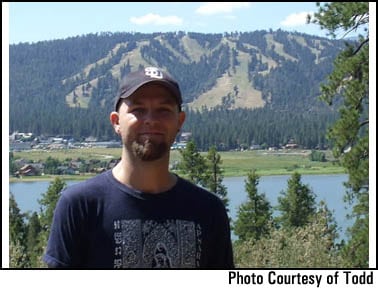 Lauren: Todd; you do reviews under the alias of “Buttertooth.” Where did that name come from and do you ever think of changing it to something a little cooler and more punk rock?

Todd: It’s a nickname I got from a friend named Brian Midway when I used to tour and play in the band Guff. One of my front teeth started turning “buttery” as the roots loosened from a high school fight that led to a punch in the mouth. The joke was that Brian always bitched about how I had a “buttertooth” but the girls still liked me on tour.  I explained to him that my “buttertooth” charmed them.

Lauren: How long have you been writing reviews for Razorcake and what do you feel like you’ve accomplished personally, as a writer, and as one of the magazine’s ambassadors to the music scene in that time?

Todd: I’ve been writing reviews for Razorcake for about 4 or 5 years now. I got involved once I moved to San Diego from AthensGA. back in fall of 2003. I really enjoy getting new music in the mail and spouting off my opinions. I have always attempted to listen to the music with an open mind but tend to rail on things that seem rehashed and overdone. As a writer and music lover I have always sought to mention the underground acts I’ve grown up with rather than talking about the super groups in punk like The Clash, etc..I also try to tie in philosophies I choose to live my life by.

Lauren: In the punk rock subculture, what is the main purpose of a reviewer? Is it writing something entertaining, helping bands get exposure, sorting through the crap so the readers don’t have to, or something else?

Todd: Reviewing the music straight forward could, (and would) get seriously boring to read and write. A reviewer has the right and privilege to check out new music and critique it. As a musician, I have to deal with that as well. I think entertaining people and giving a verbal description are both important parts of the review process. That being said, I sometimes feel a tinge of guilt if I completely degrade somebody else’s music but honesty and sharing your true feelings are part of what punk rock is all about.

Lauren: Tell me about growing up in Georgia and why you moved to California.

Todd: I spent my childhood in a very conservative city in NorthGA named Dalton. It’s the carpet capital of the world and there is absolutely nothing to do for kids. That changed briefly when a skate park called the Wall opened and booked everything from Rorshach to Buzzoven to G.G. Allin. The night G.G. played the cops descended on the place and shut it down. That was it for any culture or shows in Dalton. The cops and rednecks in Dalton were very oppressive. It didn’t help that our group of friends all looked punk rock in a time when you were considered a full-on freak for that kinda shit. I was a troublemaker and thought it best to move out of state after I graduated high school. I definitely believe that growing up there just made me a more outspoken person later in life though. I decided at an early age to hate racism and be as liberal a thinker as possible in reaction to the redneck ethics I witnessed on a daily basis growing up.

Lauren: Have you been to college? What sort of attitude do you have toward higher education in the United States?

Todd: I am actually still in college at 35! I have been in college off and on since high school. First time around was in ColumbiaMO. Where I thought I was going to be a photojournalist in the vein of Hunter S. Thompson. I never finished but instead just worked at the college radio station, went to school part time and promoted underground shows at a local club. I’m currently attending school in San Diego for a degree in Speech Therapy. I think that learning is the only way people grow and expand their grasp on the world around them. Most of humanity’s downward spiraling negative tendencies ties in with pure ignorance. I will probably still be taking classes when I’m in my 70s.

Lauren: Where do politics fit in with punk rock? How do you feel about bands that try to influence fans to vote for a certain candidate? About anarchist bands whose lyrics implore listeners not to vote at all?

Todd: As a fan of Propaghandi and Refused, I think there is no place for bands that don’t take some kind of stance. I’m a proud far left leaning individual and figure if being so outspoken runs off fans, good riddance to them. I grew up feeling like a social anarchist, but now realize that we have to maintain some semblance of order or we’re all screwed. I supported Barack Obama throughout the campaign and make no qualms about it. If he sticks to his policies and doesn’t backslide as a president, this country will make some gains as a nation. I know a lot of people shy away from politics in general in the United States but I enjoy the debate and read my copy of the Nation every week to help me have a supporting argument versus a conservative thinker.

Lauren: You play in the band Extinct Animals; how successfully do you feel like your band has conveyed its political messages? Are your audiences always receptive to what you’re saying?

Todd: We always try to push the envelope with the audience. We usually receive a positive response because it’s mostly friends that come to see us. We really started this project just to record material and express our opinions regarding the world and how the United States Government bullies nations. We are extremely pro-environment, and literalists in support of the Constitution. Since GW Bush took office a lot of our rights have been put on the backburner and that has only made us more angry and outspoken. We also try to mix art and symbolism into the show. In fact, our last show, I burned a dollar as I read out a poem I wrote in hopes of exulting greed from the human spirit.  We also set up a paper shredder and fan and blow confetti pictures of people and things we dislike into the crowd. Its all about trying to get a response from the audience.

Lauren: You said that you disdain Republicans, so I’m wondering whether that means that you don’t agree with what the guys who hold offices and make policies are doing, or if you’re saying that you feel like all the Republican citizens in this country just don’t “get it,” or what?

Todd: I disagree with their fundamental beliefs. Conservatives argue that the government should be free market but they give tax cuts to the richest people and companies. I believe in a more even distribution of wealth. On issues such as abortion, I think women have a right to choose. I often point out that republicans care about the unborn but not the living. Republicans want to spend massive amounts on the military and I think Switzerland has an excellent diplomatic record worth trying to emulate. Republicans think gays shouldn’t marry but I think it’s an issue of civil rights. Republicans think gun control is bad but I think if there was martial law, even the militias wouldn’t be able to defend themselves against the world’s largest standing army. Basically every issue I tend to lean the other way on, so, yeah, for the most part, I disdain Republicans.

Todd: The Nation, Best subscription I’ve ever had!

Band from your youth:

Todd: That’s a tough one... my Mom and my grandmother (Nanny) are neck and neck!

Record to come out this year?

Todd: Tera Melos; these guys are from Sacramento and they just kill it!

Todd: Well it’s always a blue state, but the best thing is that they have the referendum where issues can be brought before the public to vote into law. Every state needs this sort of measure.

Todd: Valet parking at an abortion clinic. (Just kidding.) How about if she just stays in Alaska but loses in a landslide next election if she ran for a city council seat.