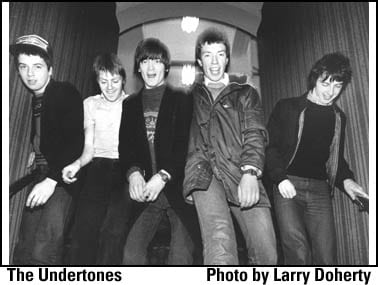 Interview with The Undertones: By Justin Maurer

The Undertones, power pop punk juggernauts, recorded uncontested classics like “Teenage Kicks,” “Get over You,” “My Perfect Cousin,” and “Jimmy Jimmy.”

Formed in the late ‘70s, this Northern Irish punk band is once again standing strong. They recently toured Southern California in a short burst of high-energy performances. Thanks in part to the non-stop fandom and support of BBC’s Radio 1 DJ John Peel, they shared labels and tour dates with the top acts in late ‘70s / early ‘80s punk: Ramones, The Clash, and The Rezillos. During this time, this poppy, happy-sounding band resolutely refused to sing about the war in Northern Ireland, but would come to terms with the explosive topic in their later releases.

Between 1977 and 1983, The Undertones released four albums—The Undertones, Hypnotised, Positive Touch, and The Sin of Pride before lead singer Feargal Sharkey left the group to pursue a solo career. Some of the remaining members formed That Petrol Emotion.

Shortly before his death in 2003, John Peel directed a documentary for the BBC called Teenage Kicks, the Story of the Undertones. He traveled to Derry for an extensive look into the band’s history. The documentary re-ignited interest in the band—including a burst of enthusiasm from the band members themselves. The self-explanatory Teenage Kicks: The Best of The Undertones was quickly released in the film’s wake.

The band reformed and recorded in 2003 with a new vocalist, Paul Mcloone. Mcloone, to the surprise of many who didn’t think that Sharkey’s distinctive voice could ever be replaced, proved to be just as powerful and unique singer as his predecessor. Get What You Need and Dig Yourself Deep are both living, spinning truths of this fact.

I caught up with guitarist John ‘O Neill, The Undertones’ founder and principal songwriter, after their show in San Diego.

Justin: Was this performance in 2011 The Undertones’ first trip to the West Coast since playing two shows a night at the Whisky-A-Go-Go for three consecutive nights in 1980? That’s actually six full sets in three days! What was the two-shows-a-night experience like?
John: Actually, we played some West Coast shows a few years ago. But, as usual, we were doing everything on a shoestring budget, so there wasn’t much promotion. It was definitely better this time around, though. There seemed to be much more of a buzz this time. No idea why. Admittedly, I don’t remember much about those shows in 1980. Our set was pretty short and sharp in those days. We were just happy to get the chance to play, especially somewhere with the history of the Whisky.
Justin: You formed The Undertones with your brother Damian and played your first show live in 1976 with covers of Fleetwood Mac, Small Faces, Dr. Feelgood, and the Stones. It’s an interesting choice of covers for a punk band’s first show. You recorded a great cover of the Chocolate Watchband’s, “Let’s Talk about Girls” on the B side of “You Got My Number.” What prompted you guys to kill the covers and start writing originals?
John: By the way, it was early Peter Green Fleetwood Mac, not the later shite! We loved early rock and roll, ‘60s beat stuff, as well the glam stuff which had its roots in rock and roll anyway. They were the only records we could hear or buy. Then later that year, we discovered a guy in Derry who had the Stooges, MC5, New York Dolls, and Nuggets records. We couldn’t believe it! That’s when we really started to learn. We never wanted to be just a covers band, so it was only a matter of time before I finally got the confidence to try out new songs; first playing them to the other members of the band and then performing them live.
Justin: John Peel called “Teenage Kicks” his favorite song of all time. Besides the Ramones, what was on your turntable when you wrote that tune?
John: Apart from the obvious Beatles, Stones, Dylan stuff, I first really started listening to music in the early ‘70s. T.Rex, Bowie, Roxy Music, Slade, they were all in the charts. Also, a lot of early rock and roll and uptown R&B stuff was getting reissued and charting again, like the Chiffons, Dion And The Belmonts, the Ronettes, and Gene Vincent. I loved it all. I was also very influenced by the film American Graffiti. I suppose it was an excuse to escape to a more innocent time compared to what was going on in Derry at that time—all the riots and shootings. Musically, I could hear the connection with punk and all that stuff. Our three favorite bands in 1977 would probably have been New York Dolls, Heartbreakers, the Ramones, and the Buzzcocks.
Justin: What guitar amp and guitar were you using on the recording of “Teenage Kicks”?
John: A H&H valve fifty watt amp and a Japanese Tele copy called a Zenta that I bought from a friend for about £25, I think.
Justin: Any fond memories of playing on the TV show Top of the Pops in September 1978?
John: It was great getting to see London and the inside of a TV studio.
Justin: Was it hard to come back home to peers your age in Derry after appearing on mainstream U.K. primetime television?
John: Punk was all about staying the same as your audience, so we had no problem coming back to Derry. Apart from our friends, who regularly came to see in playing in the Casbah, no one else took us seriously and I was happy with that.
Justin: Did you grow up watching Top of the Pops?
John: Top of the Pops was the only half decent music show on TV at that time, so everyone watched it. 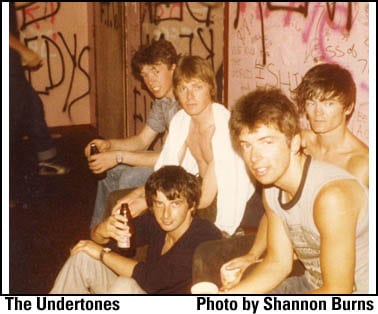