Interview With The Spits: Setting The (First) Record Straight: Interview by Shawn Durat

“And Ye Shall Know the Truth, and the Truth Shall Make You Free”
—wall inscription from the lobby of C.I.A. Headquarters

“Ye Shall Know the Truth, and the Truth Shall Make You Mad.”
—Aldous Huxley

Languid: Presently, this is the only adjective my sun-addled mind can rally, poolside at a luxury hotel in downtown Austin, Texas. The temperature hovers in the “bearable” low 90s; and having just traversed eleven molten blocks down Trinity St., under a languid lone star sun during the early endings of an afternoon, I sit on the edge of a large pool, legs dangling, plumbing the shallow depths for a cold respite from the Texan heat, and some questions for an interview. It’s 5:17 PM on a Saturday night here at SXSW 2009, and I should be down at Beerland getting drunk and watching the Human Eye freak out the crowd. But I am here in the mesquite badlands in search of something else: The Truth.

My fact finding mission had begun, quite accidentally, months earlier at a Spits gig. For the uninitiated, The Spits are a punk band hailing from, well, all over the place, by way of Kalamazoo, and then Seattle. Dubbed by some as the “Kings of Moron rock” and “demented cavemen,” The Spits blend equal parts punk and “wave,” into an aurally addictive, synth-inflected, brew. When you listen to a Spits record you’ll fall helplessly, hopelessly, grinning all the while, down the twisted sonic rabbit hole their music provides. And when you meet a member of the band, you’ll be met with a jovial smile, a firm handshake, and an easy, genuine amity. Like the Black Panthers and biker gangs of the ‘60s, The Spits and their fans (read: friends) are a loosely gathered, yet tightly nit, band of brothers. In short: When you meet one of the Spits, you will find a comrade in arms.

Which is why, months earlier at that fateful show, the tale of how their first record came to be was so troubling. A conversation backstage between Erin (bass for The Spits) and a record store owner started innocuously enough but got interesting when talk turned to the Spits’ first CD and the label that put it out, Nickel & Dime Records. It seemed the store owner was chummy with Nickel & Dime owner David Gray, a fact he repeatedly reminded Erin of, which was met with baleful sidelong glances between band members and increasingly agitated “We don’t talk to that guy anymore …” responses from Erin. While I didn’t know the full story at the time, I had heard some industry mumblings of a deal gone sour between Nick’ & Dime and The Spits. The tension during the backstage exchange was becoming palpable when I finally interjected, turning to the record store guy, and said, “Look: Dude burned ‘em. Talk about something else.” My friend Erin looked relieved, and rebuffed, the vinyl dross merchant dropped it and skulked away.

Erin turned to me and said, “Thanks brother.”

“What did happen with Nickel & Dime and that first record?” I asked, probing furtively.

Intrigued but sensing the band was in no mood to talk, I said, “You guys should tell that story. People need to know the truth.” Before switching to subjects of less importance, like the price of opium in China, and the chances of a Raiders Superbowl appearance in ’09.

That was last Fall; and now it is Spring, as I find myself down by the pool, at the same luxury hotel the Spits are lounging in for SXSW, waiting for the band to join me and hammer out an interview. The subject: The truth about what went down, lo those many years ago, between David Gray, of Nickel & Dime notoriety, and The Spits, when they decided to work together on Spits #1.

As I wait for the guys to arrive, I sit and ponder the fact that things are looking particularly good for the band of late: They’re simply “vacationing” at this year’s South By’ (complete with luxury suite; invitations to the most exclusive, drug-fueled, King Kahn & the Shrines-induced, orgies; and of course, VIP passes beyond every velvet rope in the greater metropolitan Austin area) so the harried “Ten Gigs in Two Days!” schedule is not their nightmare this year; they’ve finished work on their best album to date, with plans to release it this summer; they’re enjoying a renewed vigor, having played several mini-tours in the past couple of years, both here and abroad. So, yeah, things are looking decidedly up for these professionals of weird.
The guys finally amble down to the pool, after switching into trunks for a dip, and mill about the elegantly designed Olympic-size swimming pool, deciding which spot will be best for the interview/tanning-sesh. Smiling, and a little tipsy from the Beerland show they’ve just witnessed, a mock indignant Erin greets me first, asking, “What the fuck man? Why weren’t you down at that Human Eye show? It was fucking insane! What are you even here at SXSW for?” The following transcript contains the answer:

Shawn: How did you guys get involved with Nickel & Dime records for the release of the first album?
Erin: Through a friend of ours who was half owner of the label. We thought, at the time, that he had full ownership of the label. So, he came and asked us if we wanted to do it.
Lance (drummer): Yeah, and his buddy, David Gray, was the guy that ran Nickel & Dime. He kind of connected us and, in the end, basically vouched for Dave and assured us that everything was going to be cool.
Shawn: Was that back in ’99?
Lance: I don’t remember what the year was but sometime there in the ’90s, sure.
Erin: I think it was in ’97?
Sean: Yeah ’97.
Shawn: Wow. So why did it take so long for the record to hit the streets?
Lance: Well [sighs] first things first, we weren’t very happy with the recording arrangement, just because the engineer was a Seattle kind of rock, grunge, type of guy and, as we were recording and listening to the stuff, it wasn’t really sounding the way that we had hoped; it was sounding really digital and really produced.
Erin: Yeah, we pretty much just didn’t want to have it put out. We thought it sounded horrible but they (Nickel & Dime) just went ahead with it.
Shawn: You guys didn’t even want the thing released!? When it came out were you pissed?
Erin: I was really bummed with it. We all were. The band was just really, really unhappy with it.
Shawn: Did you know it was coming out? Did the label defer to you at all?
Lance: What happened was, we were so fucking unhappy with how the record sounded, that we didn’t want to release it at all, but we were sort of obligated to release it and he was going to release it anyway. So everything about it we were going, “Oh well, let’s just put this artwork, let’s just do this ‘cause it sucks and who cares, whatever…”
Erin: They just pretty much said, “We put this much money into the record …” which was some unknown figure, but they claimed it was a lot. And they said that they were just going to go ahead and do it.
Shawn: At that point you have no legal recourse, in terms of stopping the material from being released?
Erin: No…. But at the recording session, they approached us with a contract. It was some one page deal. Of course, we had no knowledge of contract law or anything.
Lance: Well, Dave had shown us a contract which we really didn’t want to sign because the wording of it was such that it kind of eluded the fact of whether or not we were signing away all the rights to the songs and stuff. When we questioned our friend and Dave about it, they said, “Oh that’s just a formality. We would never do anything to screw you guys over. Even though it says that, it’s not really that way…” And …
Sean: We just thought that since our friend was part of the business we weren’t going to get screwed.
Lance: Anyway, we kind of put our foot down about not signing it and then we got to the studio and they were saying, “Okay, well, you guys are not going to record unless you all sign this.” There was much arguing and then, basically, it was them saying, “Don’t worry, everything’s gonna be fine. You’ll own all this music and all we really are saying [with the contract] is that we’re putting it out.”
Shawn: Oh, man.
Lance: So, it was our first record; we were fucking inexperienced and we’re there at the studio …
Erin: They pretty much trapped us into this contract at the recording session. It was a total shady move. I did a little research into music publishing and I didn’t know… I thought it was a vague term. But it isn’t. When you sign over your publishing, that’s uh …
Shawn: It’s iron clad once you sign on the …
Erin: Right, exactly. Well, apparently it is, but that’s if the contract is even valid and that’s a whole different story.
Shawn: But in retrospect you feel that, Dave Gray at least, was clearly misleading you guys about the contract?
Lance: Oh yeah, I think he knew exactly what he was doing. If we’d had more experience we would’ve just bagged the whole thing and said no way, but we were so eager to put out a record and everything.
Shawn: Did he David pay for the recording, totally?
Lance: Yes he did.
Sean: Yeah, well, he claims he did.
Erin: But then we talk to the guy years later and…
Sean: [interrupts] The guy who recorded it.
Erin: Right. And he says that, no, they didn’t.
Sean: They never paid him.
Erin: They paid him just half.
Sean: They paid him half of the money that was agreed on.
Shawn: So the Nickel & Dime guy is nickel and diming the engineer? 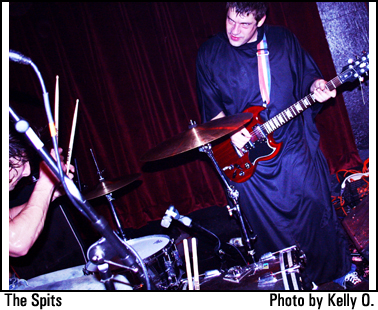 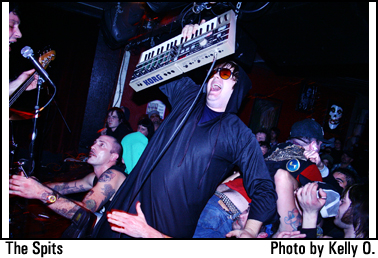 It’s 11:15 AM in Playa Del Tortuga, five weeks later, as I sit rapt at my living room window watching an oblivious Pacific Ocean roil in a white capped indigo tumult; I am waiting for a phone call. When I arrived home from SXSW and began sifting through the detritus of queries and counters that made up the bulk of the discussion I’d had with The Spits, rummaging for the Truth, a most curious thing happened: I found more questions. I realized I would never slay this cantankerous beast of a story without flipping the coin to the other side and talking to David Gray. So I called Gray, e-mailed the same interview questions I had asked the Spits in Austin, and waited.

Gray calls just before noon and we talk briefly about the questions I had e-mailed him and he says he’d rather not talk about it, that he’d rather the Spits get a hold of him, and deal with the situation directly. In other words: End of interview. I thank him for his time, he thanks me for the interest in his label, and we hang up.

So… what do I think really happened between band and label during the recording, production, and subsequent release of Spits #1? What is the Truth of the matter? Who knows? But, I’ve got a pretty good idea. I’ve been on the beat long enough to know that if it walks like, barks like, and looks like a jackal, it’s probably not a duck.