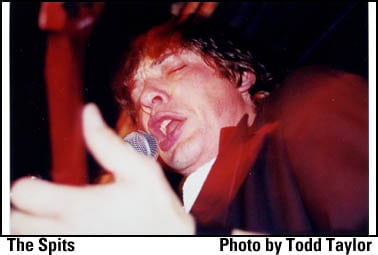 Interview with The Spits: Interview by Justin Maurer

The Spits have been ripping it up since uprooting from their ancestral home of Michigan and violently planting themselves in Seattle. Through their own blood and toil, an outpour of music has consistently flowed from the Wood brothers, A.K.A. Shawn and Erin Spits. Their first single came out in the late ‘90s. My copy features a hulking beast stealing into the night with a beautiful girl draped over his shoulder. Instead of fearful, the girl seems to be quite delighted with her abduction, not minding the uncouthness of her Neanderthal captor.

Skateboarding, alcohol, drugs, heartbreak, and not fitting in are common Spits themes. They use violence, touring, and punk rock as their main escape from a shitty world. Thankfully, many have been able to use The Spits punk rock music as our own escape for over a decade now.

Get your skateboard under your arm, drink six beers, take your young girl's hand, go into the night, and take back the alley. I caught up with them on their last tour, sneaking in a quick interview. The Spits had ants in their pants, wanting to jump back onto their skateboards to bomb one of the ramps nearby. Here's the best punk band on the planet, The Spits.

Justin Maurer is a writer and musician based in Los Angeles. He is the singer for Clorox Girls and LA Drugz. His music and writing can be found on his website: http://www.justin-maurer.com/