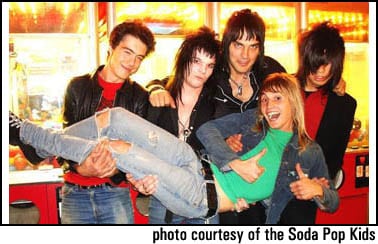 Interview With The Soda Pop Kids: Find out who doesn't like Motley Crue. By Frame

Mike: I wanted to get some background stuff as far as you starting out in Denver. How did D and Jonny meet up?

Diet D: We went to this party and everybody was dancing. It was one of those late night dancerooskis. T. Rex came on and he leaned over and sang some lyrics in my ear and I was like, “Oh man, I wanna start a band with that guy.”

Jonny: That is actually a true story, too. We don’t usually like to give straight answers but that is actually the way it went down. Because nobody really looked like us and was into that stuff; we kind of lived in a bubble out in the Midwest. So, we didn’t realize this stuff was happening; had been happening for a couple of years.

Mike: How long did you play as Kill City Thrillers?

Jonny: We were around for about a year. We knew the name needed to change. It wasn’t what we wanted to go for all the way. We wanted to re-invent it before we made changes like moving to Portland.

Mike: How did you do in Denver?

Jonny: Denver is weird. It seems like no matter what kind of genre you’re into, it is kind of a small pockets. So it’s actually kind of a cool communal thing where everybody supports each other. Nobody else was into the same thing as us, but we actually did really well in Denver. Zack (guitar) wasn’t in the band in Denver. He moved out here after we got out here and joined the band.

Mike: Tony, what happened with the Riffs calling it quits?

Tony: We got back from tour one time and we were gonna take a break. For the previous two years we had been on tour so much. Then we just all ended up doing other bands and never got back together. I wish there was a better story. I wish I could say someone got shot or whatever. [Laughs]

Mike: How did you meet up with these guys?

Tony: I was just at a bar one night and some people introduced me to Jonny and we started hanging out. So many people would ask me to be in bands, and I just didn’t want to, because I was just sick of it. But somehow they got me excited about it.

D: Because we have an innocence about us. We have a pleasurable naiveté about us. [Laughs]

Mike: What are the plans for the new record?

Jonny: We are doing eleven songs for the album and we’ve got a few tricks up our sleeve. We are the first band to record a full length in Pat Kearns new studio, which is really exciting. Devin really shined through with some new songwriting. It’s going to be completely different from the first record.

Mike: Are you guys happy with Portland?

Tony: For the small amount of people in Portland that are into this stuff, it’s pretty tight. Everyone knows everybody and they are all at each others parties, ripping each other off for coke. [Laughs]

Zack: On this East Coast tour, we went to Denver first and it was a really successful show. But I think between me and Jonny, we probably could have named eighty to ninety percent of the people, people I would consider to be friends of mine.

Mike: What are the plans for the new record? Will it be on Full Breach Kicks?

Jonny: Yes, we are proud to be on Full Breach Kicks. He is spreading his wings and flying. [Laughs] We’re flying the friendly skies with him. We’d also like to say on the record that we have no influence from Motley Crue, by the way. We don’t look like miniature Nikki Sixxes and we don’t like Motley Crue.