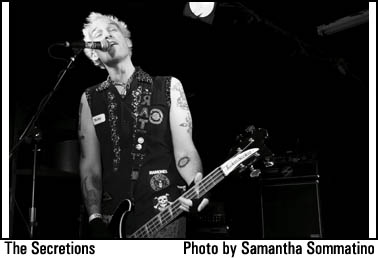 Interview with The Secretions: By Sean Castillo

While it’s hard enough for most bands to make it past their first gig, it’s even harder to keep that band going year after year. For The Secretions, one of Sacramento’s longest mainstays, it’s just another day in the life. Formed in 1991 by the remaining members of a college radio station, the group went from playing sporadic house shows, to releasing a handful of albums, completing multiple nationwide tours, and recently finishing a series of benefit shows throughout Northern California. In addition to writing some of the catchiest songs you’ll ever hear about zombies, stepfathers, and killing your neighbors, the band manages to stay remarkably friendly and endearing to their fans. Although they’ve gone through a few changes over the years, the current line-up looks to be their strongest yet. Never one to disappoint, The Secretions have been keeping the Sacramento punk scene on high alert for nearly two decades, and it doesn’t look like they’ll be slowing down any time soon.

Sean: Lately you guys have been involved in a number of benefit shows, the most recent being the "Cancer Sucks" show, which you played with Ashtray, The Pizzas, and a handful of other bands. Can you explain the motivation behind doing shows like this?
Paul: That’s all Dan.
Danny: Every year, being the arrogant bastard I am, I throw myself a birthday party. It started out just as wanting to have a show with all my friends playing. Then after a few years of doing that, a friend of ours, who was very monumental to the Sacramento punk scene, and he was living in Japan (his name is Jay), he played in a band called the Ski Pigs and the Lizards. He was very important to us…
Mickie: They were some of our earliest influences.
Danny: He was diagnosed with cancer, so I thought, “Let’s charge admission and send the money to Jay.” So, we’d send the money to him, help him out, and he’s been battling cancer. Every year we send the money to him. This year we made shirts, and the money from them is going to him, and the money from the door is going to the American Cancer Society. Cancer has affected so many of our friends and so many of our families and members of this band personally. It’s taken away a lot of people that we loved.
Sean: I saw you’re also involved with the “Happy Christmas (War is Over)” single.
Danny: Yeah, you figure we’re at the point where if we can do what we do, if we can be the idiots we are and help someone, why not? We don’t sing political songs, but it doesn’t mean we’re not political. We don’t sing compassionate songs, but it doesn’t mean we’re not compassionate. Instead of us writing a song about how horrible it is to lose your father to cancer, we’d rather write the songs we write, raise some money, and give it to the American Cancer Society.
Mickie: We’ve always been that way from the beginning. It’s just a part of our punk rock upbringing. If somebody needs something, you play a benefit.
Sean: Do you think that kind of communal support is something native to the Sacramento scene,or is it something you’ve just taken upon yourselves?
Danny: It’s a big part of punk, and I think it’s everywhere you go. I would have to say it’s a little bit more active here in the Sacramento punk scene, and I’d like to think that we had something to do with getting people to realize that’s what you should do. I think, since we’ve been around for so long, that younger punk bands see these old guys doing a benefit and then another one and another one. They think, “Maybe we can do a benefit,” and then we start seeing other kids doing benefit shows. That really makes us feel something. We figure if we can set that kind of example that’s a good thing. I’d like to think in Sacramento the punk scene is a little more communal in its way of thinking.
Sean: On that note, Los Angeles and, to a lesser degree, San Francisco have been recognized inthe past for having some pretty popular and influential punk bands. Despite having somegreat bands in Sacramento—The Bananas, The Helper Monkeys, and The Groovie Ghoulies just toname a few—Sac's punk scene is oftentimes overlooked in importance. Why do you thinkit’s glossed over by punk historians and documenters alike? 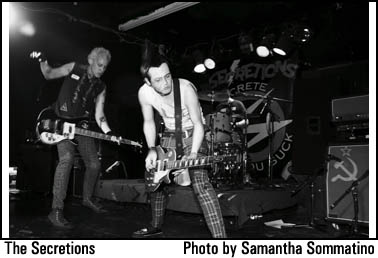 Danny: I don’t know. I think Sacramento’s never been considered a hip or cool city like San Francisco.
Paul: Our proximity to the other really big cities in California kind of makes people go, “What’s going on over there in San Francisco or L.A.?”
Mickie: We’ve never had a club like 924, and we’ve never really had a solid spot for bands to play regularly and become legendary. It’s always been a constant battle with the city and the cops.
Paul: It’s really hard to establish a place in Sacramento, which I feel is a really big hindrance to the scene in general. In Sacramento, there’s so many city ordinances you have to go through and cops are so tough on clubs out here, that it just kills clubs after a while. That’s why we don’t have really longstanding clubs that should still be around to this day.
Danny: Clubs that back in the day—Black Flag, the original lineup of the Misfits, the Dead Kennedys played at—in Sacramento are no longer there, and that’s what’s really sad. A friend of ours has this collection of fliers of shows he went to in the early ‘80s. We’re talking historical, monumental punk bands played in Sacramento, and at that address now there’s a hair salon or a coffee shop. The first punk show that I ever went to, there’s a Starbucks there now. Those venues just aren’t there. Who knows if Sacramento will ever be noticed as a mecca for really good underground punk rock or not, but the thing is those bands like The Groovie Ghoulies and The Bananas have gone out there, and they’ve recognized Sacramento. Hopefully, one day, we’ll be mentioned with bands like that as something important that’s happened in Sacramento. 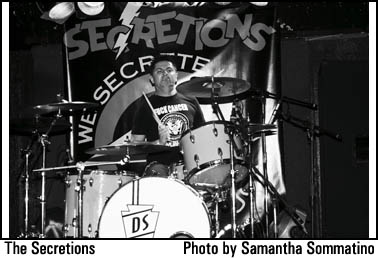 Sean: Do you ever think pop punk almost becomes demonized in a way, with that aspect of punkmusic constantly being lumped in with more mainstream bands, despite the fact groupslike The Ramones, Buzzcocks, and The Undertones were central figures in the first wave ofpunk? It does seem like a lot of emerging bands as of late have been veering toward themetal/thrash/crossover side.
Paul: I look at that as marking a trend. Pop punk got really big last decade and declined, and people tend to veer away from what was really big and commercial. It was really marketable back then. A lot of people our age liked it before it got all big. I don’t want to say, “I was there way back then,” but we were there before the marketing input.
Mickie: I’ve seen pop punk—whatever that’s defined as these days—I’ve seen it go through two waves of, “Hey, it’s really big! Oh, now it sucks. Oh, hey, everybody likes it again!”
Sean: Trends within musical tastes are almost cyclical.
Mickie: Yeah, and we’ve been around for those waves.
Danny: And me, I’m too fucking old to care if pop punk is popular or not. We’re not gonna change our sound to whatever. We’re always going to write and play songs we want to listen to.
Paul: That’s really what makes a band survive: whether you’re pop punk or not, or this genre or not. Being a good, solid band that believes in the music they play is how they survive. It makes bands strong that way. Otherwise, they come and go with the tide.
Danny: In every scene there’s that band that’s playing what’s popular. We’ve had our share of those in Sacramento, and they get really big. They get bigger than we’ve ever imagined, and now they’re not around. But they were playing punk funk when the Red Hot Chili Peppers came out and then sounded like Green Day when Green Day came out, and they just kept changing their sound to whatever was popular. And yeah, they were playing the Volcom stage at Warped Tour and they were getting in big magazines or whatever, but now they’re no longer around, so who cares? We’re playing songs we wrote in the early ‘90s and we’re still having fun playing them, and I think that’s all that matters. Popular or not, we’re not playing shows because there’s gonna be hundreds of kids there. We’ll play if there’s ten kids there. We don’t care. We’re gonna play songs we like, and I think that’s the trap bands get into. They try to play what’s popular or adjust their sound to what’s popular.
Sean: While listening to all your guys’ records back to back, I noticed somewhat of a progressionin song structures. ‘Til Death feels much faster paced, and more of the songs are sung with agrowl, as opposed to stuff in Faster Than the Speed of Drunk, which has much more of a Ramones feel to it, and the vocals are much more enunciated and sung.
Danny: When ‘Til Death came out, I’d say we were a pretty pissed off band at the time, and I think that came across in our songs and how we played them. Coming to Save the World, Mickie and I were kind of dealing with broken hearts at the time.
Mickie: And listening to the Descendents.
Danny: And that’s why that album has a lot of broken heart songs.
Mickie:Faster is kind of a combo of both. 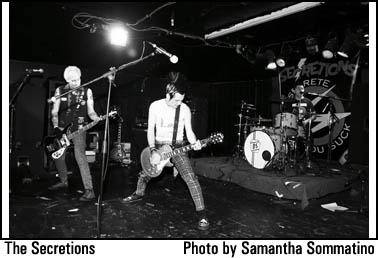