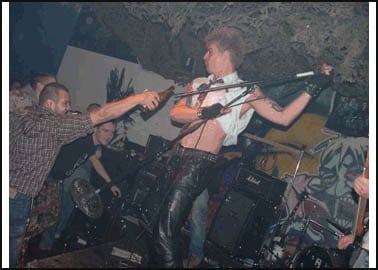 Interview with The Nazi Dogs: I Did Regret the Fact That I Accidentally Snorted Some Speed Before the Show... By Adrian Salas

It seems there’s a new bunch of nazis over in Aachen City, Germany. Before I sat down to interrogate their leader, I found a few bits of interesting information in the CIA file:

André Chien—bass player in the Nazi Dogs. No other current bands right now, because his side project Turd Burglars called its quits. Quite well known for being a social reject since the middle ‘80s. Hates almost everything except soccer, playing his bass, drinking, and smoking proper quality hash. Blood type and age totally unknown. Zodiac sign: Libra.

Daichi Dog—drummer. Joined the Nazi Dogs in November 2002. Played formerly in a punk band from Aachen City called Mess-Age. This guy was far too good for those guys, so the Dogs decided to steal him from them. Infamous for starting fights on and off the stage, and he usually wins. Can consume huge amounts of alcohol and weed without showing signs of exhaustion. Blood type and age: mysterious. Zodiac sign: Sagittarius.

I told “Karsten,” as he likes to refer to himself, to sit down in the straight-backed chair with the too short legs, and positioned him right underneath the naked 150-watt light bulb. We hadn’t allowed him anything to eat or drink for hours, keeping him locked up in his holding cell. I knew he was ready to talk. Here’s a transcript of the interrogation:

Brian: Besides The Nazi Dogs, what other current German bands are worth checking out?

Karsten: We got a few pretty cool bands over here. You should definitely check out The Shocks from Berlin. They did not play live for a year or so, but are back on the map right now. Then we got Dean Dirg from Münster. They’ve got a pretty outrageous and chaotic sound going and remind me a little of The Germs. Other cool outfits are Shitfucker’s Dick & His Burning Assholes from Cologne, 2nd District from Bochum, and Frontline from Berlin. Oh, and I almost forgot the Gutter City Sluts from Aschaffenburg City. They rock!

Brian: Do you get a chance to see any American bands on tour in your area?

Karsten: Yeah, American bands are touring quite frequently in Germany.

Brian: Who’ve you seen that impressed you recently?

Karsten: Myself, I booked the first Stitches European tour back in 1997, which was, as you can imagine, a chaotic burnout blast [laughs] but actually, not too many bands did impress me recently. I saw The Black Haloes two weeks ago, which was alright, and The Dwarves were pretty cool, as well, a couple of months ago. I missed The Briefs and the Epoxies last weekend, but I already saw them a few times, so... Actually, I can’t wait to see The Stitches back in my neighborhood, and The Fag Hags and Broken Bottles from Orange County should come over, too! The Avengers show I saw a few weeks ago was pretty rad!

Brian: Do you guys tour throughout Europe, or mostly stay in Germany?

Karsten: We mostly do shows in Germany, but already played Switzerland, Belgium, France, and Holland. Currently, we’re working on some dates in the U.K. Most likely, we’ll do some gigs there with a cool band called the Chinese Lungs from London. We also got some offer to tour the Czech Republic—let’s wait and see what will happen. But you guys out there in California—stay tuned for some German invasion! Nazi Dogs will come over some day soon to promote our debut full length there... and to show you kids what German punk is all about! No complaints later about broken skulls, ruined ears and lost girlfriends! [laughs]

Brian: You sing in English on the CD. Do you do any material in German? Does most of your audience speak English?

Karsten: To this day, we only got songs written in English. For some reason, it’s more easy for me to use your language for writing songs. It just works out better this way I guess, but you know what’s strange? In my other band, Teenage Panzerkorps, which is based in San Francisco, I only got German lyrics goin’, probably ‘cause it’s not straight punk rock, but kinda progressive art punk which is perfect for some Teutonic singing. I think most of our audience is able to understand what our lyrics are about—although they probably don’t get them properly when we perform live—but there’s a lyric sheet in our LP.

Brian: What kind of reaction do you get from people in regards to the name Nazi Dogs?

Karsten: It was kinda hard to get the band started in Germany with that name, as you can imagine. People, also in the punk scene, got riled up a lot and many fuckers tried to give us shit for the name. The TKO deal was perfect. We only did like seven or eight shows all in all. This was 2004. Most of those shows were held quite secretly or the name was castrated to N. Dogs or whatever, but in the meantime, we got more well known and, luckily, don’t have problems anymore getting shows. It seems like people finally realize that fuckin’ punk has got nothin’ to do with leading a peaceful, politically correct life. We’re no stupid missionaries, right? We still believe in punk as a means to shock and annoy people, and if someone is getting riled up, that’s okay with us. You know, when I got into punk I was fascinated by those fucked up, outrageous, obnoxious, and wild personalities in the scene, people who were real outlaws and no whiny motherfucking hippies. Punk died the day when pc took over and all those lame people with no musical taste at all joined the scene and talked about animal rights instead of starting some spontaneous chaos.

Brian: Give me an idea of what goes on in the audience at a Nazi Dogs show. Is there a pit, dancing, slamming, fighting, spitting, what?

Karsten: On a really good day, almost anything may happen during a Nazi Dogs show. We love to play small clubs, when it’s getting all sweaty and people are freaking out during our set—that’s pushing my performance a lot. We usually have the pogo goin’, people spitting beer, screaming into vacant mikes, raising fists. Our audience usually does not fight too much. That’s our drummer Diarchies job, actually. He loves to crack some skull from time to time, so you better watch out! I remember some open air show in a small town near Frankfurt last year, we were all pretty much out of our heads and did that GG Allin cover “Bite It You Scum” as an encore. People freaked in front of the stage and we had our buddy Samuel El Action naked on stage singing the song together with me. Suddenly, some guy pulled down my pants and, at that moment, I did regret the fact that I accidentally snorted some speed before the show... even more when I realized that someone in the audience was filming this event!

Karsten: It was probably the Rolling Stones in 1990. I saw them in some soccer stadium in Cologne. I have to admit that I checked out some Pink Floyd show on acid one year later.

Brian: What was the first record you heard that made you say, “I’m gonna be a singer in a punk rock band”?

Karsten: It was definitely the Never Mind the Bollocks album by the Pistols. It took me some years to find the right guys with a proper attitude to start a punk band, but it finally worked out, as you can see. Singers who influenced me most are Iggy Pop, Johnny Rotten, Stiv Bators and Darby Crash.

At this point I terminated the interrogation and released the suspect on his own recognizance. We’ll be keeping our eyes on him though.