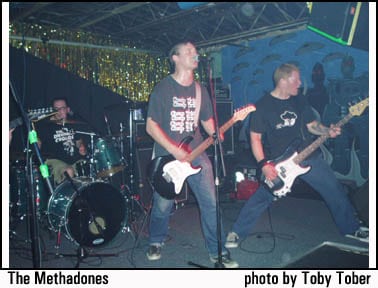 Interview With The Methadones By Mrz

I tell myself that I must be strong…I need the antidote to regain control! The antidote? Lo and behold, here it is.

Yessir, the Methadones are back with a new record and not a moment too soon. I need to make sure I don’t wear out my Methadones classics, and what better way to do that with than new material!! The album is called 21st Century Power Pop Riot and was recorded at Atlas Studios, infamous studio which has birthed many great albums by the likes of The Lawrence Arms, Alkaline Trio, East Arcadia, Rise Against, and Redscare label-mates: The Falcon. Dan Schafer was nice enough to talk a bit about the new record, their old records, and a bunch of other shit I’ve always been dying to ask, so until you get your hands on their new disc, enjoy this interview!

Mr. Z: Per the Thick Records website Not Economically Viable is loosely based on the movie Falling Down. How did you start formulizing a themed album after Career Objective? Was it something long-since planned or something that just kind of happened?

Dan: It was something that just kind of happened. When I was writing the songs for the record I was in a very low period of my life. I had been laid off twice and my marriage was on the rocks. My economic status brought upon a lot of problems both personally and musically.

Mr. Z: Why specifically the movie Falling Down? What themes were you trying to replicate and get across to your fans? What was it about this movie that hits home with you?

Dan: He (Michael Douglas’s character) is divorced and unemployed. He suffers greatly not only from himself but because of these factors. I also love how he flips out at the societal stupidity that surrounds him…

Mr. Z: Are your day jobs anything like Michael Douglas’ character in that movie—suit and tie-ish—or is it just the same feelings you feel? Do these jobs (and the bills they are being used to pay) play a huge part in preventing a higher frequency in U.S. tours?

Dan: It's the only reason we don't play a higher frequency of shows. Most people can't seem to grasp that concept no matter how many times I tell them. I hope I don't sound bitter here, really I'm not, but I don't come from wealth and it's not feasible for me to be living in my parents house so I can tour. I don't live on some trust fund which affords me to be "artistic.” Many punks now come from middle to upper middle class families. In the Screeching Weasel days, we saw this wave of kids come to our shows from very affluent suburbs. A slew of fourteen- and fifteen-year-old kids would be buying our merch with $20.00 and even $50.00 bills. 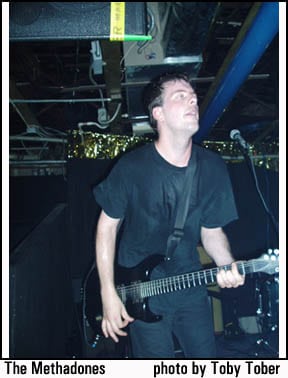 Mr. Z: Which of you is married? Does this also make touring hard?

Dan: None of us now. Pete and I are both divorced.

Mr. Z: Dan, in the My Brain Hurts reissue you said that the best songs you’ve ever written were written quickly. Do you think this still holds true today? Also, how different is the Dan Schafer of The Methadones than the Dan Schafer of the (non-existent) band Stiff Members?

Dan: I think it still holds true today. In many ways my approach toward music is not very different at all. I've grown a lot and have been through many different experiences, of course, but the basic principle is the same. Keep it honest and try to have fun with what you're doing.

Dan: I have wanted to do a record covering power pop songs for the last six or seven years. These bands and songs are pretty influential to me. I wanted to make a fun and informative record. I think we did that. They're great songs that seem to have slipped through the cracks for many people.

Dan: We chose songs that we felt we could do with a shred of justice while staying true to the integrity of the original. Songs include Gary Glitter “Leader of the Gang,” The Beat “Walking Out On Love,” The Jags “Back Of My Hand,” Elvis Costello “Welcome to the Working Week,” Joe Jackson “I'm the Man,” Crash Street Kids “Into You,” The Thumbs “Full Moon Turn My Head Around,” Scandal “Goodbye To You,” Pointed Sticks “Out Of Luck,” Nick Lowe “Heart Of The City,” The Records “Starry Eyes,” Cheap Trick “He’s a Whore.”

Mr. Z: Do you guys think this album will kick Me First and The Gimmie Gimmie ass?

Dan: [Laughs] I like the songs they cover, too! But this record is pretty much a tribute to the power pop genre of the late ‘70s and early ‘80s. It's a different kind of record.

Dan: The Thumbs song we recorded predates punk rock by a few years. They were a Chicago band who formed in 1975. They were pretty punkish sounding and ahead of their time. Members from The Thumbs went on to form the Pezband and Off Broadway, both who were Chicago power pop heroes.

Mr. Z: Aside from the States-side repress of Career Objective on Thick, each and every CD you’ve recorded has been released by a different label: A-F, Stardumb, Thick and now Redscare. How did this happen?

Dan: A lot of the labels weren't sending statements and I still have yet to receive royalties by anyone other than A-F records. (If any of you read this give me a call, I would like an explanation, okay?)

Mr. Z: How is the member dynamic different from being in Screeching Weasel, the Vindictives, the Riverdales, The Mopes, Sludgeworth or any of your past bands?

Dan: The dynamic with the Methadones is totally different than the other bands I played with in the past. The personalities have some influence of what the band does and does not do.

Mr. Z: So Dan, what does this mean to you and what did Joe Queer mean by this?: “Danny Vapid ain’t no faggot, but he’s okay to me!!”

Dan: It means Joe King was hurting for song material...

Mr. Z: How does the band decide what compilations to be a part of, which labels and which bands are to be worked with? Do you just go with the flow, or is there major deliberation within your ranks?

Dan: If something looks cool and we want to be apart of it we'll take it on. We usually just go with the flow.

Mr. Z: What recording session is the song from which is featured on the new Fat City Magazine free CD? This seems to be only one of two unreleased comp tracks I’ve seen from you guys, the other being the song on the Justice for Diallo benefit CD.

Dan: The song is called "Examine" and it's from the Not Economically Viable session.

Mr. Z: What are your current musical inspirations?

Dan: I've been listening to a lot of Elvis Costello and Weakerthans lately. Lyrical genius.

Mr. Z: I’m almost 30, I’m married and I’m stuck at a dead-end job doing bullshit for other people when I’d rather just be playing and listening to music with my wife and kid. Would you say these variables are very important in seeing why I identify with your songs moreso than, say, a fourteen year old who spends all day on the internet?

Dan: Yep. Something struck a chord a long time ago with people like you and I. We continue this path for better or worse. Either way I couldn't change that if I tried.

Mr. Z: Expanding on that just because we’re old doesn’t mean that your fanbase are all old DIY punks, right? Your songs are so catchy and heartfelt I’m pretty sure you have fans from all age groups… or am I wrong? Are the younger kids more interested in the mainstream albums for their ipods than they are about DIY punk rock?

Dan: We have fans of all age groups. I have a local guy that sent me a friend request on Myspace recently and was surprised when I found that his age was fifty-five. I figured he was ten years younger. He comes to our shows with his son who is around twenty-two or twenty-three. I have seen them as young as eight or nine and as old as fifty-five!