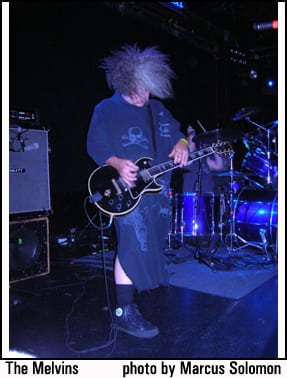 Interview With The Melvins: Live at the Troubadour, July 27, 2007 By Marcus Solomon

It was a journey through one man’s innovative and artistically erratic mind. It was more performance art and visceral sensation than music. The sounds and colors blended together into a pulsating, semi-rhythmic fog of vibrating noise. It often sounded like a spaceship revving its enormous engines in a vain attempt to take off… slowly to rise… a brief moment of triumph celebrated with ear-splitting harmony… and then back down into the thick, formless void of fuzzy clamor. This is what most of the audience expected. Melvins performed two complete albums—Lysol and Eggnog—both being primarily abstract works of extremely loud sonic craft. The rest of us—the ones not familiar with these two particular records—were left bewildered and stunned.

I was late… as usual. If I am ever on time to anything, check to see if it is really me. Consequently, I missed the opening act, Freak Bird. I wish I could tell you something about them other than some guy told me it is an awesome band. Due to lagging friends, I made it into to the Troubadour club just as Freak Bird left the stage. Judging from the many sweaty, smiling faces, I missed out on something worth experiencing. I cannot find this band anywhere on the Internet, so…that’s that.

After about half an hour, King Buzzo came out and began fiddling with his equipment—no, not that equipment—his guitar and all the various pedals, knobs, amps, and effects. The wait seemed much longer. I have become a great fan of this band, and my anticipation took me to the time warp most often occupied by little kids waiting for Christmas. Two big guys occupied the space right next to the stage right in front of where grungemaster Buzzo was to perform, partially blocking my view. One was an effeminate, harmless dork who kept condescending to me. I was amused and impressed with this soft-bellied man’s sarcastic nerve. Little did I know what was to come next.

Buzz came out alone without a word. I don’t think he ever vocally addresses the crowd. Even so, when this man looks you in the eye, it feels like something painless but sharp has penetrated your psyche. Dressed in a black, oversized tunic-thing, he strummed a chord and began twiddling and fiddling with the effects in such a way that it reminded me of Butthole Surfers’ early sound. Having apparently found the resonance he was looking for, Buzz then proceeded to close his eyes and strum in staccato fashion to the off-tempo metronome in his head. He undulated back and forth. He shot piercing glances at various audience members. His guitar-noise-machine screamed, growled, and rumbled. The other band members came out to join the maestro of intentional racket. Long-time and thunderous drummer Dale Crover and fill-in bassist Trevor Dunn (formerly with Mr. Bungle, Fantomas, and more), silently took their places, carefully watched Buzz, and soon followed him into the roaring morass of sound.

Most of the audience enjoyed it. For the most part, I did not and that is my own fault for having an incorrect expectation. I have been exposed to the rocking grunge-metal of albums like Houdini, A Senile Animal, and Hostile Ambient Takeover. Sometimes, I closed my eyes and drifted into an imageless trance, swaying to the non-existent rhythm created by the enveloping din… but then, I would get lost and wake up back in the club wishing the band would just ROCK! My fault, and I was not the only one. After the final chord was struck, Buzzo and crew left the stage without a word. The lights came up, and some of us stood there swimming in a collective sense of, “What the fuck just happened?” I noticed that the spongy dork in front of me left immediately when Buzz left the stage. He knew. I did not. I look forward to the next Melvins show at the Music Box Theatre on September 15, 2007. The band will play the album Houdini in its entirety and Mudhoney is also on the bill. Now that will be a show that will rock the fuck out of my accurate expectations.