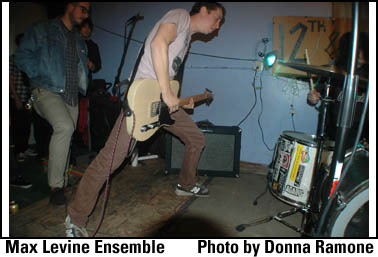 Interview with The Max Levine Ensemble: By Donna Ramone

“What is this genre called?”
“Punk. Pop punk. Rock‘n’roll. Something like that.”
“No, I think it has a name. At least, it should have a specified name.”
“Fine, how about you name it?”
“Maybe I will, jerk.”

I was listening to The Max Levine Ensemble when I had the above conversation with a friend. Remember the first time someone told you The Dillinger Escape Plan was considered “mathcore” and your brain exploded because suddenly the world made a little more sense? Seriously, this sound has to have its own sub-sub-sub genre. The combination of music, vocal stylings, and lyrical content are unique enough to qualify for its own classification. It’s catchy, it’s something you love to sing along to, and it’s fun. At the same time, the lyrics aren’t exactly about kissing a girl or beating a brat. They’re politically charged and socially conscious in a way that’s more poetic than the usual “in your face” stance political songs have a tendency to take.

I could ask where the band is from (Washington DC), or how long they’ve been around (since 2000), or why they’re called The Max Levine Ensemble when no one in the band is named Max Levine (fuck, dude, don’t you have internet access?) but I’d much rather have everyone listen to one of their albums and ask, “What would you call this genre?”

My current suggestion is “Intelli-Politi-Posi Punk.” Too bad it’s the stupidest genre name ever thought up by anyone in the history of ever. “Pop punk” is it.
Interview by Donna Ramone
The Max Levine Ensemble is:
David Combs – Guitar/Vocals
Ben Epstein – Bass/Vocals
Nick Popovici – Drums
David “Franco” McGrath–MerchHottie

Donna: You guys are on tour again. How’s it going so far?
Nick: Goin’ great.
[Prolonged silence]
Donna: What is this? I’m trying to break the ice and you guys…
David: We’re doing good!
Ben: This is good for us.
Nick: This is great journalism, right?
Donna: He’s wiping his nose on the back of the headrest!
David: I had to wipe it somewhere.
Ben: That is why tour is not going well.
David: No, tour is going great. We’ve been having a lot of fun. We’ve been on tour for most of December. We’ll be on tour for all of 2012.
Donna: And before that, you guys played The Fest…
David: Yeah, we played Fest…
Ben: We played a whole bunch of fests.
David: Maria Fest, Plan-It-X Fest, Insubordination Fest. We’ll play any fest.
Nick: Asian Man Fest…
David: Best Friends Day…
Nick: We’ll do it all. 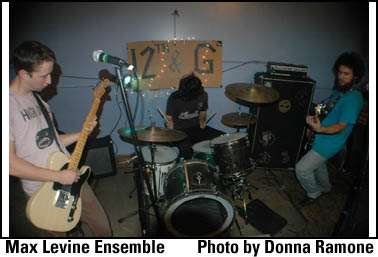