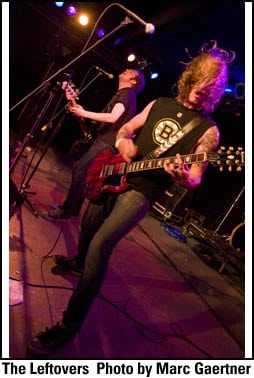 Interview with The Leftovers: By Tyler Sonic

The Leftovers may be the most authentic pop band in the world right now. That’s not to say that the world necessarily knows this, but few bands woven so extensively into the pop punk subculture throw their arms as tightly and successfully around the ideal of the polished two-to-three minute pop song as The Leftovers. That’s also not to say that they don’t fit into the DIY, get-in-the-van, sacrifice much/gain little lifestyle befitting so many bands in their circle. Understanding why The Leftovers are the way they are, takes an understanding of where they originated and where they stand right now.

Crooning singer/bassist Kurt Baker constantly extols the virtues of partying both on and off stage, making him a Jew-fro’d Andrew W.K. for the pop punk generation. Mild-mannered yet rock-solid drummer Adam Woronoff, who is rarely seen in public without his Red Sox cap on, holds it down perfectly (and most often dance-ably) for Baker and guitarists Andrew Rice and Matt Anderson. Rice, the band’s co-founder with Baker, sings lead occasionally but focuses mainly on generating some of the catchiest riffs captured on vinyl since the era when this band’s pop idols wandered the earth. Anderson, who has expanded the trio into a quartet, matches Rice’s riffage and rarely misses the chance to dive into the crowd, further breaking down the virtually non-existent barrier between The Leftovers and their growing legions of fans on both sides of the pond.

They all grew up in Portland, Maine, a peaceful city of 60,000 that Ben Weasel (the reason I discovered this band) described as “the last great secret of the East Coast.” They continue to write and tour both at home and abroad, despite drummer Woronoff transplanting to the West Coast for a job and the outspoken Baker taking on his own solo work international soon. Their music comes across as unapologetically poppy and straightforward on record, yet cranked in the live setting. When you think about it, that was essentially what made so many people fall in love with power pop and punk when they were new phenomena. Most of The Leftovers songs, a majority of which Baker enthusiastically penned, honestly recall a time when both music and life were a lot simpler. I got to catch up with the band about their current status and their thoughts on everything we take for granted about the “pop” in pop punk as we ventured into Baltimore’s red light district to find beer one Saturday afternoon.