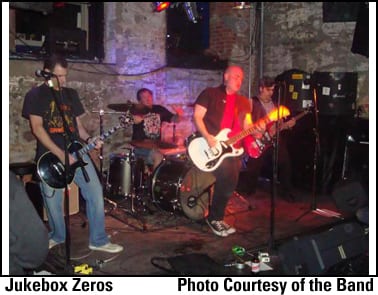 Interview with the Jukebox Zeros: Meat and potatoes rock'n'roll. By Frame

Jukebox Zeros is a world class example of an increasingly rare breed: a good, solid, meat and potatoes rock’n’roll band. Sure, there are elements of punk and garage in the mix, but this band is pure rock’n’roll at the core. And what glorious rock’n’roll they make! Philly’s finest have been around for the better part of a decade now and have released a couple of quality EPs and a classic full length record. Fans of the Humpers, Lazy Cowgirls, Jeff Dahl, and the Devil Dogs will be knocked out by the amazing, energetic blast of the Jukebox Zeros. Recently, the band released a back-handed tribute to their hometown with a new 7” single called The City of Bother and Loathe via the always classy RankOutsider Records. Anyone hankering for some real rock’n’roll with no overblown image or other pretense will wanna get on board the Jukebox Zeros train.

Mike: What was some of the first music you got into when you were a kid?
Peter: Just stuff that was on the radio. My dad was really into country and also had the oldies station on, so any kind of ‘50s or ‘60s rock’n’roll. My mom is not into music very much. I can vaguely remember easy listening or AM gold type of stuff [laughs]. The first record I bought, I wanna say that it was Kiss, but I don’t think that’s right. I honestly don’t remember the first album that I bought. I know the first CD that I bought was Ramones Mania.
Rob: I had an older brother and sister, and my dad liked rock’n’roll, so music and that stuff was always around. But the first thing I had myself was Queen’s Greatest Hits. It was given to me as opposed to given to my sister or brother. Then in junior high, I went hognuts wild for David Bowie and The Beatles. That was all I listened to for two years.
Mike: When did you first get turned on to punk?
Peter: Probably in grade school because everyone was into skateboarding. I never skated though; I have terrible coordination as far as that goes. I played Little League when I was a kid, but I was never into sports. You will definitely find that disconnect in the band. Rob and I are like, “Sports? Whatever,” and Brian and Justin follow baseball. Justin is really into soccer now that we have a team in Philly. So, the first punk rock I heard was just hanging out with my friends and watching them skate. It was probably after Little League practice as a matter of fact. Black Flag, Ramones, Misfits, Suicidal Tendencies, B-52’s. I remember “Rock Lobster” was a big thing. Everybody always had that song on a mix tape, just that song. No other B-52’s. I guess I got into it pretty early, but I don’t even think I recognized it as punk rock or anything at the time. It was just music. I didn’t really buy much music either. It was always a friend who had an older brother who had dubbed tapes of all that stuff, and you would only know one or two songs by a band. I didn’t really get into buying records until high school. That’s when it started.
Rob: I got into punk pretty late. I gotta admit I was a prog rock dork. I took guitar lessons like everybody else, but I wasn’t real good at it. I couldn’t play King Crimson and all that. I always liked the Ramones, I remember Rock’n’roll High School always being on cable and liking that. In college was when I went wholeheartedly into the punk rock.
Mike: What were some of the first shows that you went to?
Peter: Dead Milkmen was definitely one of the first ones I went to, a VFW hall show. Other than that, it was mostly just local punk bands at halls. There used to be something called UniSound that started in Reading, PA and then it moved to Pottstown. They did all-ages shows. I saw Anthrophobia, Batman’s Brother Ed. It was really just going to see your friends’ bands play. I didn’t even have a band in high school. I tried really hard to have a band and nothing would happen. Nobody knew what the fuck to do.
Rob: I can tell you exactly the first real punk rock show I ever saw. It was a matinee with the New Bomb Turks, Dancing French Liberals Of ’48, Showcase Showdown, and The Wretched Ones. I think the next one after that was Wayne Kramer. Growing up in the suburbs there was nobody really into what I was into, at least in my social circle. The kids in high school who wore black and were the punk rock kids, I didn’t like them particularly. I had the Repo Man soundtrack and they all had that too. In God We Trust by Dead Kennedys, I had it, but I don’t remember how or why. 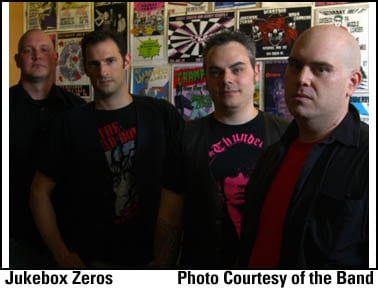