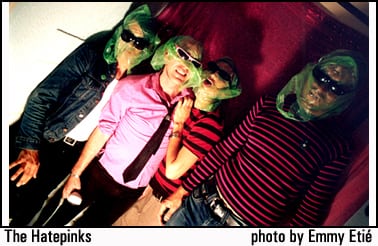 Interview with the Hatepinks: By Dirk from Sunday Stripper Zine

The Hatepinks, a story of love and evolution. Perfectly qualified for ritual murders, unfair sado-maso sex practices, suicides and, rollerskating or maybe just for dreaming and a little piece of chocolate ice cream; it´s on the listener to decide. The Hatepinks consisti of Olivier Gasoil, a part time F.B.I. agent working in a public library,  Le Colonel Nasser Le Pink, a specialist in translating first class menus into Arabian language, Remi Der Pinkbeat, inventor of the original Italian pizza in the year 1923, and Huggie Von Pinkbird, musical mastermind of the Beatles finest takes, do unleash an inferno of anti-social E.T.-influenced rock music, like it has never been heard before. They are not afraid to show the world that they are better than the Rolling Stones, better than the Bee Gees and even better than ABBA, for whatever´s sake. Rolling Stone Magazine has called them a trash can in which an evil parallel universe comes to life, a universe in which people are pissing into swimming pools and real toilets are history, a universe in which you can fall in love with Tupperware without being judged a pervert, a universe for you and me. Now enter the stupid world of the Hatepinks and be part of something something you won´t regret!

Dirk: The Hatepinks just released some nice pieces of little plastic like the Plastic Congelators and Ikea Bathroom 7"s on Squoodge as well as the Elektrokopf split on Wanda Records, tell us some more about it and about your split with the great Chinese Lungs. Do funny things really happen while recording 7"s in the studio? Are you under toxic influences while recording them?

Olivier: First of all, excuse my bad English. Okay, those records are out and gone. Yes, we always try to have some drugs while recording, otherwise it gets boring. Our last recording is just finished yet, for TKO - it should be a 10” - but shit man, we had no drugs, only cheap wine. The result is disastrous. I don’t think the people at TKO will release this horrible shit. The worst part is the mixing. How can anyone stand in front of a computer screen, with that boring mixing program? And we had no speed this time. So Huggie made his guitar part naked, for a little distraction.

Dirk: Should I really ask about band history and facts that made the Hatepinks as famous as they are now? Okay, I will do it, just for this interview. So tell us some more about your job in a public library - maybe interesting things do happen there. Are people really reading books like Harry Potter? Is the Colonel still studying Arab history and will he ever finish? Is Rémi der Pinkbeat still unemployed and should he start working in a pizzeria? What is the worst case of music Huggie ever sound engineered?

Olivier: Nobody is interested in our everyday jobs. I work in the computer space in a public library, yeah. Fuck Harry Potter. Le Colonel Nasser Le Pink (bass) is still studying Arab history, I don’t think he will ever finish. He is a doctor now. Who cares? Rémi is still eating pizza and doing absolutely nothing. Huggie did some sound engineering for experimental contemporary music. He once recorded a Brazilian orchestra who imitated the Amazonian river sounds. Boring. Merde.

Dirk: Talking about jobs, do you think that punk rockers should learn real jobs or even go to school at all? Are jobs punk rock and does anyone care if they are?

Olivier: Hey man, school is shit, I agree with you, but, what else can we do to have a social life? How can you live without knowing who is Jean Jacques Rousseau? Or Charles Baudelaire? I would never have read about George Orwell or Oscar Wilde… I don’t know. State-established culture or ignorance? The innate and the asset? Wow this is thoughtful… I’m too tired, intellectually speaking, to think about the punk rock jobs part. 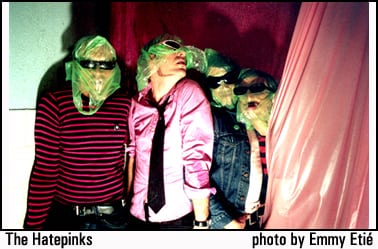 Dirk: Now here is a stolen question that I really like and that is a good knot to the above one. What are the most punk and unpunk things the Hatepinks members are doing on an average day?

Olivier: Colonel Nasser Le Pink likes to dance a lot, but he’s an Oriental guy. They are not the same. I went to Ikea once or twice. I have written a song about this unpunk experience.

Olivier: I would be selling cars. That’s a great job. Rémi der Pinkbeat would be exactly the same, listening to shitty records and eating pizza. Huggie Von Pinkbird would be nothing. Nasser would finish his studies.

Dirk: Name five hippie albums the Hatepinks are listening to when being stoned!

Dirk: Name five punk rock albums that are a worthless piece of shit!

Olivier: End of the Century by the Ramones, the second Adverts album. Oh god, I hate everything by the Clash after London Calling. Even London Calling is half filled with crap. The Slits. Never liked the Slits. The Dictators' Go Girl Crazy, never liked it, and a tons more…

Dirk: Finally name five styles of pizza you are especially sick of and why!

Olivier: German peoples sometimes put bananas on pizzas. That is really disgusting! Bananas with salami; they should be killed. Otherwise, we like every kind of pizzas. Oh yeah I have seen Nutella pizzas. Another sick thing! 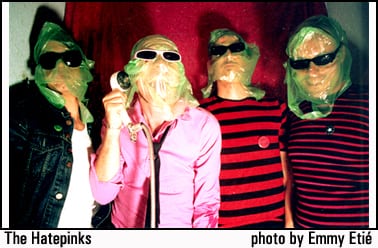 Dirk: Everyone knows that touring in Germany is great, filled with food and beer. Touring in the USA is really fucked up, no food and no beer, so how is touring in France? Wine and roses?

Olivier: Wine, yes, a lot. Roses, no, never. France is not so bad, but there is not so much places, no clubs. You play in bars. It’s funny sometimes, but Germany is definitively better. Let’s see how it goes with the USA. Everybody who played there told me it’s so-so: some great places, but no food, no drinks, no money, no drugs. We will see. It’s the first time we would go to the States, for every each of us. Nasser is always complaining: “Why should we go and play for those American pigs? You can not trust this occidental vermin!” It’s always a good laugh. Let’s see if they’re really all so fat.

Dirk: Two-thousand and seven will see the Japan invasion of the Hatepinks. How did that happen to be and what do you expect of it?

Olivier: A Japanese booking agency from there is okay to book four to five shows, and to pay for the plane tickets. Japan is fascinating to me. Japanese culture, garage-punk and aesthetic, the urban architecture, I want to see everything. I love Guitar Wolf and Seijun Suzuki. All the movies from the Japanese New Wave are really strange and beautiful.

Dirk: You are also going to release a CD with all your songs only for Japan on Revel Yell Records. How crazy are the Japanese people for the Hatepinks, and did you ever get any response to your releases from them?

Olivier: No, we never had any response.

Dirk: Back to the facts now, people want to read about them. Whats the worst toilet you ever saw while being on the road and where was it?

Olivier: It was in Sweden. In Gothenburg. I’m sure the living being who did what we saw had more than just one asshole. It was multi-directional. Fascinating.

Dirk: Let’s talk about the skinny ties, stretching trousers, sunglasses blablabla clichés that somehow seem to surround you and a lot of other bands as well. Maybe the people themselves are just too dumb to think further than this cliché goes. What would you say?

Olivier: I always did some old '77 retro shit, even ten years ago I already played that kind of stuff with other bands I was in. The only difference is now I know Crime or The Angry Samoans or La Peste. Back in the days it was only The Clash or The Sex Pistols and 999 and The Lurkers, I was 15… About trend; I don’t know, it’s shitty, but it can be funny if it’s done with a little humor. We got a song called “Fashion Is Crime”… But, fuck, I don’t want to justify. It’s funny to wear sunglasses and pink buttons. I feel sexy, motherfucker! But we really hate new wave gay punks. They suck! They always go like, "Look I’m dancing like a robot with white sunglasses, how nice! Look at me. I have got a stupid stripped pull-over and I play keyboard." Assholes. We all played in several bands before the Hatepinks: some power pop shit and some garage punk trash. We decided to form a band just to pass time, with people with no real musical connection, thinking it would last a few months. We really wanted to play a couple of shows here in Marseille and say goodbye. Nothing too serious. But okay, we still have fun so we’ll do a third album, and we will quit. Next year I think.

Dirk: How should or could people live on when the Hatepinks are gone, except of the fact that they cannot talk about skinny ties anymore?

Olivier: Fuck you and your skinny ties questions. We have decided not to wear ties anymore, from now we will dress like, I don’t know… skinheads? Yeah pink skinhead, with army boots and glitter straps.

Dirk: Cover versions, you seem to like them: Bad Brains, Pagans, Swell Maps. What is up next, which French punk song should a punk band cover?

Olivier: We tried to cover PVC’s “Boredom Now” but we failed. We covered Gene Vincent “Catman” but we won’t include this on a record. Next will maybe be The Nipple Erectors, or The Bears. We covered “Ich Möchte ein Eibär sein” from this stupid Swiss band, Grauzone. A good cover a band could make is a song from Les Dogs, like “Too Much Class For the Neighbourhoods," or “Charly Was a Good Boy." You should absolutely get their Go Where You Want to Go, a maxi LP from '78. We also did a single where we covered Les Plastic Congelators. It’s a very unknown band from our hometown, Marseille.

Dirk: Tell me the story about you falling in love with a jpeg file, a song from “Parasites Like Me," which was out on Unity Squad Records. Which jpeg file was it and do you think other people could fall in love with it too?

Olivier: I’m sick of this. Everybody asks. I’m going to explain. I am not talking about me in this song. I talk about a frustrated guy who thinks it’s admissible to buy a Russian girl on internet. It’s a social song. A real sad social song.

Dirk: Alright, next song. How does it feel while kissing cops with your ass? Do they like it? Do they like the Hatepinks because they were the main sexual theme in one of your songs?

Olivier: Yes they liked it a lot. The Gendarmes are always looking for a good screw. The next part of the lyrics from this song is about licking their moustaches with my ass. It’s another social song.

Dirk: Do you think punk bands should have fist fights at rehearsals?

Olivier: Yes, I think so. It happened to the Hatepinks only two times. The bass player, Colonel Nasser was always involved. You know how Arabs are.

Dirk: What should I do now?

Olivier: Take drugs and kill yourself.

Dirk: Anything that an old wise man ever said to you, that you would like to share with us at last?

Olivier: We have recorded a new 10" for TKO, the title will be Tête Malade/Sick in the Head, I think. And we have an American tour for October to November on the way. And now it’s time to stop.