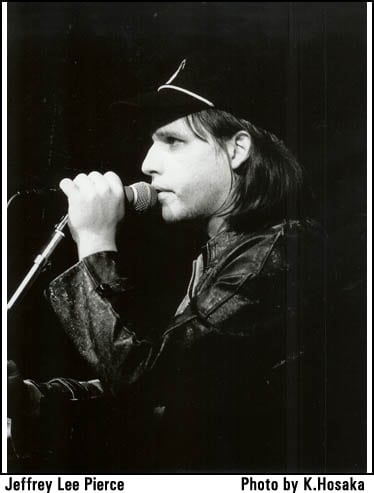 Gun Club figurehead Jeffrey Lee Pierce (1958—1996) was lucky to have Jacqui Pierce as a sister and Johnny Faretra as a brother-in-law. The two have worked indefatigably in keeping the Gun Club’s catalogue in print.

Like a lot of pioneers, Jeffrey Lee Pierce’s work was met with much critical acclaim—yet mild record sales. When Jeffrey Pierce passed away a dozen years ago, most of his catalogue was out of print. Jacqui and Johnny—being two of the Gun Club’s biggest fans—have kept the memory of the group alive.

The Gun Club continues to influence many—from the White Stripes to the Starvations. The following interview was conducted on the eve of the Gun Club’s newest release—a box set entitled The Life and Times of Jeffrey Lee Pierce and the Gun Club.

(Thanks to Mor Fleisher for help with the transcription of this interview.) 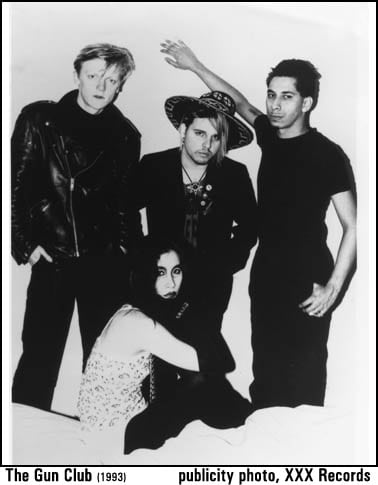 Ryan: It seems like a lot of what you’ve been doing with your brother’s Gun Club records (reissues of Miami, Las Vegas Story, Death Party, Mother Juno, etc.) these past few years has come to fruition with this box set. Tell me how it came together.

Jacqui: I’ve had Creeping Ritual Productions in process for two years now. We (Jacqui and her husband Johnny Faretra) started as a tribute company on Jeffrey’s birthday—June 27. I’ve been getting e-mails from different companies like Raven Records in Australia and another company from Spain wanting to do a compilation record. But nothing really went through; everyone ended up being really flakey. We wanted to make sure this record was done right with music spanning Jeffrey’s entire career. In the past there was a question of who owned the rights to certain songs. But there’s no question now. We’re doing it; we’re moving forward. We’ve already put together and released Ahmed’s Wild Dream—which is a great live album—with Cherry Red Records. And that’s doing really well. Anyway, like I said earlier, a lot of people were talking about doing a compilation—but there was always the issue of Fire of Love.Fire of Love belongs to Warner Brothers.

Ryan: Are you in limbo with Lucky Jim (the Gun Club’s last record) as well?

Jacqui: We own Lucky Jim. The only one we don’t have is Fire of Love.

Ryan: That’s a crucial one not to have!

Jacqui: But we’ll have that soon. The law states that after thirty-five years everything goes back to the family. Sometime around 2011 Fire of Love will be ours again. But Warner Brothers has been good. They pay my mother her royalties, so everyone’s happy. But we could do a lot more with that record as far as doing things like this compilation.

Ryan: You had Mike Mastrangelo—the old Gun Club Fan Club president—help you with this album, too.

Jacqui: Mike Mastrangelo had been working with Long Gone John (owner of Sympathy For The Record Industry—the label that reissued much of the Gun Club’s catalogue) in the past. Mike’s like the madman who followed the band from 1980 to 1984. Mike thought that Jeffrey was a very cool guy. He was always very polite to my brother. He just went up to my brother one night and said, “I’d like to be your fan club president.” Jeffrey agreed and they ended up having a great relationship.

Mike used to work for Sanctuary Records. And when Sanctuary changed into Universal, he went into limbo for a while…but he still had this idea for a major Gun Club collection. He had all this live material that he came to me with wanting to release. Mike eventually partnered up with another guy to release this box set, but this partner was basically trying to rip Mike off. Mike severed the business relationship with him and found a job with Vibrant Records as their production manager. He came up to me in April 2008 when we were in London and presented the track lists of his recordings. I was blown away. And it seemed like we finally found the right company for it.

Ryan: I was really pleased with it, too. It covers the Gun Club’s very beginnings—like with Kid Congo Powers in 1980—all the way to Jeffrey doing his solo thing with Cypress Grove in the early ‘90s. It even has a rare David Crosby cover, “Laughing.” I think it has a strong track listing. There’s the studio stuff for the benighted and the esoteric stuff for the diehards.

Ryan: My favorite thing about the insert is the inclusion of your brother’s typewritten lyrics.

Jacqui: Those came from me.

Ryan: Jeffrey left those for you?

Jacqui: Yes. We provided the old photos and pictures of (formidable Gun Club bassist) Rob Ritter (1955—1990) too. I even have some typewritten lyrics my brother did that he never recorded. What I really like about this compilation is the live stuff. It really captures what a Gun Club live show was like. Jeffrey was very theatrical and crazy live.

Ryan: Some of the live stuff on here was taken from previous releases—like The Birth, The Death, and the Ghost live album from 1984. Did Mike present any live stuff to you that came as a surprise? I know the version of Bo Diddley’s “Gun Slinger” on this box set isn’t available anywhere else—at least to my knowledge.

Jacqui: To be honest with you, a lot of this live stuff is new to me. I never had a lot of his bootlegs—just his studio stuff. One surprise is “L.A. County Jail Blues.” I didn’t know that song existed. It was recorded in March of 1993.

Ryan: Getting back to the liner notes—I really like Chris Stein’s essay. He never really explained his role in the recording of Miami. It was interesting because Stein took so much flak for the production of that album.

Jacqui: When I approached Chris Stein about including something for this box set he said to me: “I’ve been dying to speak about this (my time recording the Gun Club)! I’d like to be apart of this project you’re working on.” So we asked him if he could talk to us about Miami and what he and Jeffrey had envisioned with that record. Chris immediately came with that foreword to the booklet. It should be said that we wouldn’t have Miami had Chris Stein not been involved. He sent us the masters and told us to take care of them.

Ryan: You have some Red Lights demos. (The Red Lights was Jeffrey’s first band—rooted in power pop.) I was thinking earlier when you told me about this box set that they might appear on it. And they don’t. Are you ever going to release those? I like them a lot.

Jacqui: Yeah. I was thinking of releasing them in the future on a repressing of my brother’s autobiography, Go Tell the Mountain. Just as a bonus. To me—I think those Red Light tracks would fit better on some other release. There might be some legal stuff involved with those Red Lights songs that I’d have to look into, too. Anyway, if we don’t put them on as a bonus for the book, we might tack them onto a future reissue of Miami or something.

Ryan: When is this box set going to be out?

Jacqui: It was released on October 27. It’s available here: http://www.creepingritualproductions.com/.