Interview with The DC Snipers: by Eric Holgren

The DC Snipers are a relatively new band from the New Jersey/New York area. Taking cues from other musical pioneers like the Screamers, Gang of Four, Urinals, and the Electric Eels, the DC Snipers forge into their own fragmented, audience-less sector and begin to build a following based on songs that are undeniably catchy without sticking to a musical “script.” The most difficult part of being in a proto/art punk/whatever band like this is: to do something completely innovative and different, yet still leaving the listener with something loosely ill-defined to grasp onto. And the DC Snipers completely nail that. They have recently released their debut LP/CD Missile Sunset on Dead Beat Records and are just back from a U.S. tour. Mike, Dan, and Chris from the DC Snipers were interviewed just before their U.S. tour and the interview is a shining example of the off-kilter personalities that make the core of the DC Snipers.

Mike: I need a new pair of shoes.

Dan: I just got fired from a job delivering toilet paper because I crashed the truck three times. What’s your problem?

Chris: Are you kidding? You try writing five episodes of According to Jim and singing in a punk band. I’m going gray juggling all of these “responsibilities,” not to mention alimony.

Eric: What’s the point of playing in a punk band in 2006? Don’t you think you’re wasting your lives? You could be at home, listening to NPR and making babies. 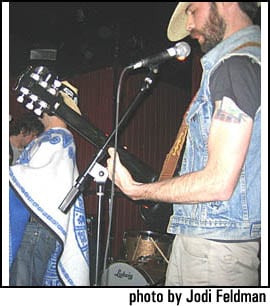 Mike: I need a new pair of shoes.

Dan: There’s no point in playing in a punk band. There’s no point in making babies. What’s the point in interviewing punk bands? I’ve pretty much resigned myself to the fact that my life is a total waste and maybe the most significant thing I’ll ever do is feed maggots when I’m a rotting corpse, just like your grandmother. I listen to Leonard Lopate every day. I have his autograph.

Chris: See, that’s what I love about racism...wait, WHAT? I forgot what we were talking about.

Eric: Have you ever seriously considered suicide? You have nothing to give to this world. Why don’t you just do it? What’s holding you back?

Mike: The voices in Chris’ head make it difficult for him to live, but he goes on everyday. It’s a fucking mine field in there every day.

Dan: His ass is a minefield, too. You should take his advice: Chris, kill yourself. I’d kill myself but I just got a killer bag of weed.

Eric: If it weren’t for LSD, heroin, and Xanax, would the DC Snipers still exist?

Mike: Hold on. I have to take a piss.

Dan: I’m not convinced we do exist. You holdin’?

Eric: You’re each fucked up in your own unique way. Which of you is the worst off? 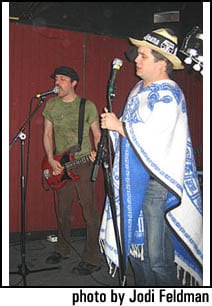 Chris: Even Mike knows it’s Mike. Dan is missing half his dick from a toilet paper delivery accident but he is celibate so, yeah, definitely Mike.

Eric: How long have you been playing together and active as a band?

Mike: It always seems like one year, every day.

Dan: Ha. You said that yesterday.

Chris: Two years. As you can see, the comedy is what makes this seem brand new.

Eric: Are you a New Jersey band, New York band, Jew York band? Where’d it start and where are you now?

Mike: Jew Jersey. It started in Jersey, and none of us are there now, ‘cept Luke.

Dan: It started in Jersey and it’ll end in Jersey just like everything else.

Chris: You even gotta ask that? See, that’s what I like about rape...wait, WHAT?

Eric: Are there any good punk or non-punk bands coming out of NJ these days? Is there any precedent for good punk out of NJ? Any NJ influences?

Mike: One great current NJ band: VCR. Amazing, blown-out garbage music. There’s this band from Princeton, NJ: Rape Escape. I haven’t seen live, but their recordings are pretty cool. There might be more. As far as old stuff, you would think there would be more good punk from NJ other than the obvious Misfits and 1st Detention single, but I’ve had a difficult time. There was some good stuff: Chronic Sick, Ambient Noise...there was some good power pop, too.
Dan: The Horny Worms are real good. VCR is great. The kid played his guitar with his butt and then licked the strings. No joke.

Chris: New Jersey is a punk wonderland, ‘cept, everybody is quick to head off to Williamsburg (Mike) and try to be queer artists, make handbags, and sniff coke off a trust funders’ Waterford crystal. NJ is the primordial soup. There’s always great stuff in and out of NJ.  People always just seem to remember the hair metal. Sure, Detroit has the Stooges, but I have to remind you that it also spawned techno in gay clubs in the ‘70s/early ‘80s so STEP OFF WORLD! I’ll take Trixter any day over gay techno. No offense, gays out there!

Eric: There’s a song on the album called “Get Awesome on the Streets.” How do the Snipers get awesome?

Mike: We all carbo-load and watch old Bruiser Brody against Terry Funk matches.
Dan: Bruiser Brody rules. I’m a falconer, it’s a hobby of mine. I like to take the falcon out into the streets. I’ve trained it to steal ice cream from children. I think free ice cream is pretty awesome. That and sometimes I get pretty loaded. I learned on the hit TV series Cops that gold paint is the best for huffing. The cop said, ‘‘It has the most amount of, um, chemicals for getting messed up.” If you wanted to get awesome on the streets that’d be a good place to start.

Eric: How is it that you’re all old men and you haven’t been in any bands before? Is there a musical history somewhere?

Mike: I was in a couple bands, none of which released anything, thank god.
Dan: I played nothing but prog until about a year ago. I was in Bruford, Wakeman, and Howe. I was the one in the cape.

Chris: Why create when you can just criticize others? We figured it was just time we pointed that high-minded finger at ourselves. But WHOOPS! We farted out America’s best punk record since, I dunno, Shit Street?

Eric: Do you find inspiration from the teeming masses of dickbags running afoul in New Jersey? Do you ever want to murder the snobbish New Yorkers who’ve never been to New Jersey and look down their noses at you?

Chris: I’ll field this one: there are plenty of dickbags in NY. And most of ‘em aren’t even from there. They move from New Hampshire or some other plain-ass cumhole and within six months you’d think they designed the fuckin’ subway system. We real, they no real.

Eric: What’ve you put out so far?

Mike: Shop Fronts split on Your Permanent, Missile Sunset LP/CD on Dead Beat and a comp track on Let’s Have Some Goddamned Fun.

Eric: Where have you played? Has there been any touring?

Mike: We did a small tour of the Midwest. We’re going to SXSW, the Midwest, part of the South, and the West Coast soon. We’d love to go to Europe. Maybe next year when we have some more releases.

Chris: I think we will be in Europe in the fall if we don’t kill each other first.

Eric: You guys are prolific for a group that only rehearses a few times a month. You always got a lot of new songs. Where does it come from? Who’s writing?

Mike: We have a demerit system, where if you fuck up on stage four times you have to write a song. I think it probably comes from God.

Dan: Usually I hit myself in the head with a hammer or I hit Mike in the head with a hammer. Or we blindfold Gatland, spin him around, give him a club, and tell him that there’s a piñata hidden somewhere in the room. Someone ends up bloodied and then the songs flow like the fluid from your girlfriend gets when she sees a picture of Frank Stallone. Oh yeah, Kentucky Bourbon helps. Have you heard “Soviet Union”? It ain’t Chinese origami.

Chris: I write them all!

Eric: Who’s usually the most fucked up at the end of the night? Any particularly low moments that you’d care to share with the Razorcake readers?
Mike: All moments are low.

Dan: That one time when those Russian brothers were the only two people at one of our shows. They were so insanely ripped on cocaine and the one guy kept on trying to talk to me and all he could say was “I think...I think...I think...” We’re standing out by the van and it’s the middle of winter and sweat is beading on his forehead. Every breath he took seemed like an immense strain on his heart. I’ve never seen anyone that high on coke in my life. I thought he was going to explode. And I realized that this thirty-eight year old crazed Russian coke fiend, who’s probably dead now, is the only kind of person that will ever like our music. I saw my life spread out in front of me and it was filled with lonely, drug-addled misanthropes. That guy was awesome.
Chris: Yeah, those dudes were two of the four there. They liked metal, and the “sweater” worked at a gas station, had the worst teeth I’d ever seen, and came to America to become a “rocker star.” I was bugged out.

Mike: We should have two or three singles out in the next few months, and a new LP before the year ends.

Dan: There’s no future in the past.

Chris: Next new great label should be Daggerman Records, so our first new single will be on that. But we always shoot ourselves in the foot somehow. So how about... NEVER!!