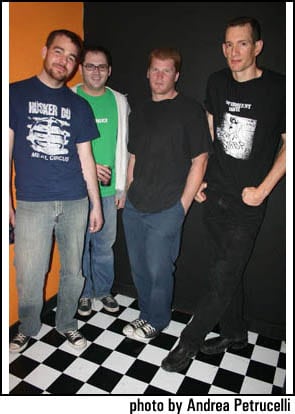 Interview with The Bomb: Seventeen-Year-Old Kids and Forty-Year-Old Punks at the Same Show By Koepenick

I had first heard about The Bomb while looking at an old Naked Raygun fansite that looked like it had not be updated since the first Bush administration. It didn’t have too much information, so I kind of put it in the back of my mind. Time passed and then somehow I stumbled upon Jettison Music. Jettison is a great underground label that puts out killer records by The Returnables, The Matics, and Green. Oh, and it was also run by a Jeff Pezzati. Yes, that Jeff Pezzati, former lead singer of punk legends Naked Raygun. I quickly grabbed the two Bomb releases listed on their website: Arming (an EP) and Torch Songs. Both were recorded by Steve Albini (Jeff’s former bandmate in Big Black) and both are fantastic.

The EP came out in 1999 and the full length in 2001. The Bomb continued to play out frequently during that timeframe, with local shows in Chicago but also a West Coast tour was set up in 2002. After that somewhat grueling tour, original guitarist John Maxwell decided to leave the band. Jeff continued on with drummer Paul Garcia and some new recruits. Steev Custer (My Big Beautiful) joined on bass and Jeff Dean (The Story So Far) was installed on lead guitar. My first time seeing The Bomb was with this short-lived line-up. They played a New Year’s Eve show in 2002 at the Pontiac Lounge with The Methadones. The Bomb tore the place down that night. However, a new line-up for The Bomb quickly emerged. The Methadones rhythm section of Pete Mittler on bass and Mike Soucy on drums signed up for double duty to play with The Bomb. With this revitalized formation, The Bomb enlisted the assistance of ace producer J. Robbins and Indecision was created. This is a monumental release. Any fan of melodic punk rock needs a copy of this one. I was lucky enough to catch up with The Bomb at their DC show, where they were co-headlining on a tour with Report Suspicious Activity. This chat took place at DC Nine with the two Jeffs expanding on everything from shows to skateboards. We also get “the clear” on some early cover bands that probably wanted to stay hidden! 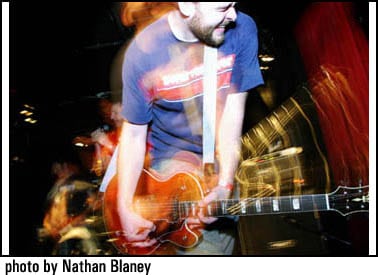 Sean: How and when did you first become involved in music?

Jeff P: I started playing guitar around eighth grade and had some really bad high school bands. The first was called Travesty. The second was called Condor and I had a really bad hairdo. We used to go up against all-Stones cover bands. It was awful.

Jeff D: I didn’t start playing guitar until much later in life. I was nineteen, I think. I was way into Dag Nasty, and always thought it would be so cool to play guitar like that, but never picked it up. Then I went to the local punk record store in Vegas this one night. There was like fifty people smashed into this little place at midnight on a Tuesday. This band Wax was playing there. It was right around when their first record was coming out. They were like this kind of pop punk band kind of thing, and they were going so insane. I remember their singer Joe Sib jumping off the records on top of everyone. I decided that night that I was going to start playing guitar. I bought a guitar off a friend of mine for $150 the next day.

Sean: What bands and artists influenced you during that time?

Jeff P: I used to have a friend in high school who brought home Clash records, Sex Pistols, stuff like that. At first, I hated it. After awhile I came around. Then I really got into Gang Of Four, The Buzzcocks, and Joy Division. But I’m not sure how much they really have influenced the music I make.

Jeff D: I think for me it was Dag Nasty. I thought the guitar playing was so cool. I just decided that I wanted to play that fast and that good. Can I Say for me was just an incredible record. Metal Circus by Hüsker Dü, too. Fuck, that record had such an impact on me, and then later on Sugar.

Sean: Explain how the recording sessions for Indecision were different than past Bomb records?

Jeff P: For me, working with J. Robbins was a new experience. He is so meticulous in the studio. He examines every little nuance, which I think ultimately led to us getting a great recording; not that I didn’t have the same end result with some previous producers like Steve Albini. It was just a completely different method.

Jeff D: The making of this record was a great experience for me as a guitarist as well. J Robbins is absolutely amazing to work with.

Sean: Are there any bands or artists around today that you would like to collaborate a song with? 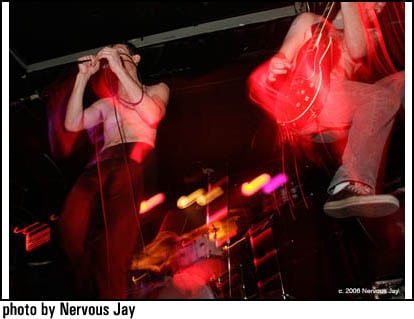 Jeff P: I don’t know about sitting down and writing a song with someone. I could see someone coming into the studio and adding some background vocals to a song. But as far as writing something together, I don’t know if that would work for me. With (Naked) Raygun, each band member would come in with large chunks of songs pretty much finished. I would usually just end up adding the final layer to it. Now, I tend to write a lot of the lyrics to Bomb songs on my own. Then I just add it to what Jeff here comes up with musically.

Jeff D: I’m not a singer. I can barely do a rough vocal melody. In most cases, I usually just come up with musical riffs or parts and present them to the band. “Here you go—see what you can do with this.”

Jeff P: Then three weeks later they ask why I still have nothing!

Jeff D: But, I guess, of current artists, I would love to do something with Bob Mould. He is really my guitar hero, and his new record is great. His last tour with Brendan Canty (Fugazi) on drums—where they did Sugar, Hüsker, and solo stuff was incredible—maybe Adam Franklin from Swervedriver, although, I can’t really see writing a song with someone who wasn’t in the band with me.

Sean: Yeah, I saw Bob Mould in DC on that tour. It was great.

Sean: What Bomb shows have been the most enjoyable for you and why? Are there any gigs you would like to forget?

Jeff D: For me, the most fun was probably when we played with 7 Seconds. That rocked! Or when we played with Mike Watt. The one I would like to forget is the first show I played with this band. It was at CMJ, there were like two people there, my amp took a shit right before we were supposed to play, and I had to borrow this amp that made my guitar sound like it was under water. Fuck, that show sucked!

Sean: What’s the largest crowd The Bomb has ever played for?

Jeff P: I think over six hundred at The Metro in Chicago.

Jeff D: For me, it doesn’t really matter if the crowd is five or five thousand. As long as the people are into it.

Jeff P: Yeah, I’d rather not open for someone else’s crowd. I’d rather play to a smaller audience if they are just there to see us.

Sean: But you could possibly win some new fans over?

Jeff P: Yeah, I guess this is true.

Sean: You all have past histories with previous bands. How has the punk scene changed since then?

Jeff P: There are too many bands and too many shows. Nothing is special anymore. Plus, all I hear from some younger bands is a lot of whining.

Jeff D: Yes, there are so many bands and so many records that something has to be really special to break through.

Sean: What music coming out today are you currently enjoying?

Jeff P: I don’t know about really recent, but I remember Radiohead’s “Creep” coming out and being really impressed by that. I go though stages. For six months all I listened to was Morrissey and Smiths records exclusively. I don’t rush out and get a lot of new records.

Jeff D: I still like a lot of new hardcore like Strike Anywhere. I like Bloc Party a lot too, but I think I listen to old stuff mostly these days. Like the first SNFU album And No One Else Wanted to Play. That record is untouchable!

Jeff P: I can’t believe you still listen to hardcore.

Jeff D: The energy level on some of these records is unbelievable.

Sean: Explain how the songwriting process works for the band.

Jeff P: At this point, Jeff comes up with the music, and I just try and see what vocal lines and melodies I have that will work.

Jeff D: I come up with the rough music outlines, but then they are also fleshed out by Pete Mittler (bass) and Mike Soucy (drums)

Sean: What do you think of the current music scene in Chicago?

Jeff P: I think its great—it’s come full circle. There are a lot of great bands doing some interesting stuff. There are also a lot more great labels then there was before—like Thick.

Jeff D: Coming from Las Vegas originally, then Detroit; Chicago’s scene is incredible. I’ve been here almost ten years and it still amazes me. It’s great! You go to shows, and you see seventeen-year-old kids and forty-year-old punks at the same shows. It definitely was not like that back home in Las Vegas in the ‘90s. That’s for sure...

Sean: If The Bomb could share a double bill with any active band, who would it be?

Jeff D: For me, I think it would have to be Bob Mould or Dinosaur Jr, since they are touring again. I’m really enjoying touring with RSA right now, too. They blow me away every night.

Sean: What activities do you like to do for fun outside of music?

Jeff D: I still love to skateboard and hang out with my wife. Does that make me lame?

Sean: What future plans are in store for The Bomb?

Jeff P: I like where the band is right now. I like where we are headed. My thing is, why make music, why spend the time, if you’re not shooting for something great? I think we’re reaching for that. If we are lucky enough to continue to do that for one or two more records, I think we will really have accomplished something worthwhile.

Jeff D: I just want to continue playing guitar. That continues to keep me charged up day after day.