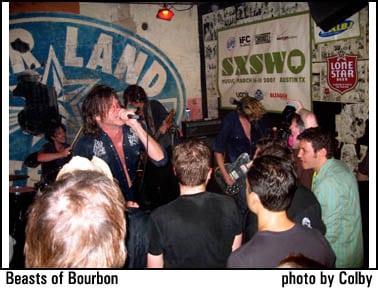 Interview With The Beasts of Bourbon: It all started in Jim Agnew's basement... By Kristen K

The first time I ever heard the Beasts of Bourbon was in my friend Jim Agnew’s basement in June of 1985. It was also the night I had been arrested in front of Vintage Vinyl for “peace disturbance/failure to comply” while on my way to buy a ticket to the Black Flag show at the end of July. If you’re going to listen to music on the night you were arrested for being a punk rocker in public then Beasts of Bourbon is more than the appropriate soundtrack. On this occasion, it was their first record Axe Mans Jazz and although at the age of twenty, when all I cared about was fast and loud hardcore, this music totally spoke to me from the first seconds of the song “Psycho” and by the time I heard the first verse from “Love and Death”: “He left her lying in the nude. That sultry night in May. The neighbors thought it rather rude. But he liked her best that way,” well, how could I be anything but overwhelmed by my new favorite band? The music is anything but hardcore but it is certainly dark and it more than spoke to me. The only reference point I had at the time was The Gun Club, which I had heard and was sort of cool with, but this, this made me want to go out and buy it the next day.

In 1990, my band Ultraman went on tour in Europe. The day after our show in Cologne, Germany we had a day off due to a show canceling. While we were sitting around, someone asked me about Beasts of Bourbon and then casually mentioned they were playing across the street the next night. I was so stoked I’m pretty sure I ran around in circles in disbelief. The Beasts of Bourbon, one of my favorite bands, was playing and I was actually going to get to see them. I never, ever thought I would see them since, as far as I knew, they never came to the States, and if they did, they sure weren’t coming to St. Louis. The next night I found myself up front in a packed room full of crazed German Beasts of Bourbon fans. I was now a foot from the mighty Tex Perkins as he sang, “the hate inside won’t be denied like a razor you can’t bend,” I can still see it in my mind. As the set ended, I was standing near the stage totally awestruck as the roadie asked me where I got my Speed Racer shirt. When I answered and he realized I was an American. He was stoked to talk to someone who spoke English and took me backstage to hang out and meet the band. And they say punk rock doesn’t pay. I went from thinking I would never see this band to actually meeting them.

For some time now I have been ruminating on the fact that when I do go to shows I see a lot of kids wearing shirts from bands that broke up before they were born. I don’t know what to think about it. On one hand, it’s cool to see that kids are into SSD, Black Flag and Shattered Faith. (How do they know Shattered Faith?) I saw these shirts at a basement with a great band The Hell, from Herrin, IL. You should check these dudes out, by the way: http://www.myspace.com/vivalahell.

What struck me, besides seeing shirts from old bands that I would have seen at a show twenty-plus years ago, was that it’s still the same scene for the most part. It’s still kids going nuts in a basement to loud, fast music. That makes me happy. Of course, at the same time, most of them are wondering why the creepy old dude is there, but, hey, that’s the price you pay for still being around in 2007. 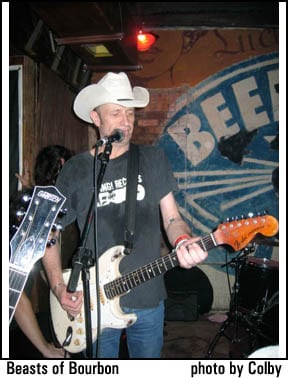 Besides the shirts I see at shows now, I recently bought two new CDs that also blew me away by how familiar they sounded yet I knew the members couldn’t be in their late thirties or early forties. I picked up Bad Reaction and Frontside Five and if you put them on next to say the Zero Boys or, say, Tales of Terror you would hard pressed to discern which one came from the 20th Century. Again, I don’t know what I think about all this. Is this like kids that were wearing hippie clothes in the ‘80s? Is this fashion and style being rehashed? I don’t have an answer here, not even for myself. I think I’ll just leave it at if the kids still dig what we did and if they get something out of it, more power to ‘em. I’ll be in back, with my ear plugs in, having flashbacks, and picking out the characters matching them to faces long since gone from the scene many years back. Power to the punk people.

This past month, the Beasts of Bourbon came to the U.S. for SXSW in Austin. I was not stoked about having to deal with that mess down there, but for the Beasts I would do it. Then they announced an L.A. show at the Troubadour the weekend before. This made so much more sense to me and decided to make the trip out. It was super short, but I still had to jam some skating into the very short trip. I arrived Saturday afternoon and headed out to Glendale after checking into the hotel downtown. This park is amazing. It’s not really big but what they have crammed into the space is amazing. The next day I met up with Todd from Razorcake then headed out to Pedlow. This park covered more area but I think had less to skate then Glendale. But it did have a totally fun snake run and one huge bowl. Todd and I skated until the nausea set in a couple of hours later. After lunch, I headed back to the hotel to shower and get in my old man nap before hitting the record stores.

I ended up at Headline where I met up with some friends from Lawrence, KS that I know from way back in the old time days of the 1980s. It seemed like the biggest Beasts of Bourbon fans from the Midwest were having a convention. After a dinner of greasy burgers down the street we made our way to the show. After a couple of opening bands of which only one name stuck, Dallas Crane, the Beasts of Bourbon began to set up. I was glad to see that L.A. wasn’t as lame as I thought it would be and they actually had a very respectable crowd. I found myself right up front, stage center. When Beasts of Bourbon take the stage, even before they start playing, they dominate. The set was a great mix of both old and newer songs from their yet-to-be-released-in-the-States Little Animals album. The song “I Don’t Care About Nothing Anymore” was already stuck in my head after hearing it once on their My Space page. Even though they had pretty much quit after their 1997 Gone album, they still tear it up. Spencer Jones can still play like a madman with total calm and ease. Now, at the start of this story, I mentioned that I first heard Beasts of Bourbon after being bailed out of jail the night I went to buy my ticket to the Black Flag show. It was dismissed as a coincidence, but Henry Rollins was in attendance for this show. It’s a crazy punk rock world. 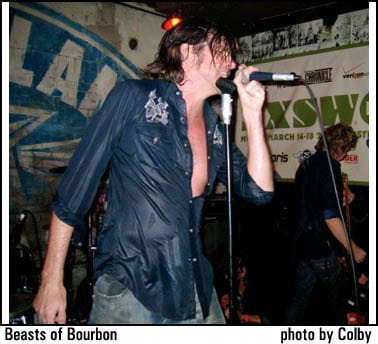 I was going to leave L.A. as my one show. I didn’t want to deal with the crowds of dummies at SXSW. But while talking to my friend Mikey in Dallas about how he should drive down on Sunday night since they were playing a late show, it hit me that I would be crazy to not fly to Dallas and drive down with him. This was my shortest trip ever to the state of Texas. The show was at Beerland, a smallish bar but actually a very cool place. The stage was pretty small and I was wondering how they would all fit up there. I again took my same front and center spot and was blown away all over again just one week later. The L.A. show was great, don’t get me wrong, but in this place, with such a small stage and seemingly controlled chaos on stage, it was actually my favorite of the two shows. I don’t know if many of the crowd even knew what they were about to see, but I would defy anyone of them to admit they were not blown away. These past two shows have been the best two shows I have seen in years. I can’t imagine any band ever coming close any time soon.

I know I ran on and on with out much mention as to what they sound like. I can’t begin to do them justice. Just check out the one new song they have posted at http://myspace.com/beastsofbourbon and you can read more about Beasts of Bourbon and other related member bands at http://www.texperkins.net/release.php?aid=3&submit=go.