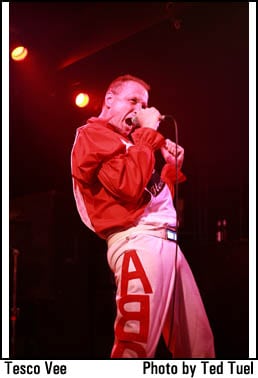 Interview With Tesco Vee: Frontman of the legendary Meatmen. By Koepenick

Tesco Vee has been making music now for close to thirty years. The Meatmen has frightened audiences across the country, with Tesco as the frontman /mastermind. With an ever changing line-up, the one constant has been Tesco’s vocals leading the charge. His lyrics provide an always entertaining view of the world. With song titles like “Tooling for Anus,” “Blowjobs Ain’t Cheatin,” and “Do a Whippet,” how could you not sing along? There have been other projects like Blight (around briefly in the early 1980s), which featured ex-members of The Fix, who recently had a CD reissue on Touch & Go. The Hate Police (from the early 1990s) was also the subject of a reissue recently. This band featured Keith Campbell (ex-Black Market Baby) on guitar and did a great version of R.E.M.’s “Losing My Religion.” But it was The Meatmen that were always Tesco’s baby, and they are now back after a ten year hiatus. Who knew that when I was singing along to “Mr. Tapeworm” back in college that I would now sit down with the man himself? Crazier shit has happened, but I was lucky enough to talk with Mr. Vee as we waited for the backstage fridge to get filled with frosty cold beverages.

Sean: When did you first start singing?
Tesco: 1979 was when it all started. I’ve always been passionate about music. All the different phases in the ‘70s, and then when punk hit, it was a natural. It was that whole DIY thing. Anybody can do it—you don’t have to have talent. It can be argued whether or not I have talent. I just thought the whole thing was magnificent. You could just pick up guitars and throwdown. You don’t have to worry about climbing the “corporate ladder.” That was the beauty of punk for me. That’s why I got into it.
Sean: Was Blight your first band?
Tesco: Actually, no. The Meatmen were going at that time. Blight was kind of a side project. It was like noise bands like Flipper and some of the industrial-sounding bands. A couple buds and I got together and said, “Let’s do a side project.” I’m kind of happy it came out. It’s another chapter that needed to be heard. Touch & Go did that in March 2005. I’m happy with the reissue, definitely. We got everything we possibly could. We went to old cassettes. Like we did with The Fix reissue. I found an old tape in my basement of a live show. I sent it to Corey at Touch & Go and that stuff made it on there, which is pretty cool. 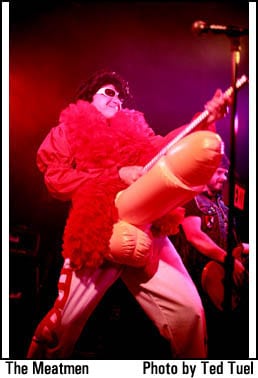 Sean: Speaking of Touch & Go, what was the best part of putting out your own fanzine?
Tesco: I like carving people up! I like to luxuriously kiss people’s butts when necessary. Conversely, I loved to reduce them to emotional rubble if I could. If I could reach them, if I didn’t like them. If you’re only putting two hundred copies out. Young people don’t even realize what it was like back then. It was really like The Dark Ages. It was letter writing and sending out records. Networking with people and talking on the telephone. Using those illegal cards that had those 800 numbers from major corporations. We had all of those and we would go from pay phone to pay phone. People who we called were getting nasty calls from them. That was the beauty of the early scene. That can never be duplicated.
The Internet is so immediate that those little ideas are not allowed to percolate anymore. It’s a good thing and a bad thing. It’s a good thing for reaching people and letting them know what is going on. It’s not a good thing for creativity. We are shopping the fanzine to publishers right now. My lawyer is doing that. We are trying to sell it as all twenty-three issues in a book. Feral House was interested in a couple years ago, but it didn’t pan out. We’re going to pursue it. I’m on a mission; I don’t care if I don’t make a dime on it. I just want it to come out. Because, virtually, people haven’t seen it. It was so limited. There were so many bands that were seminal. The Dead Kennedys and The Misfits. Minor Threat, all the DC stuff. All the Midwest stuff. We were big into the West Coast stuff. We were big into The Weirdos, The Avengers, and The Germs. It’s all stuff that still resonates with subsequent generations. So I think the book could really “move some units,” as they say in the biz.
Sean: So looking back on that fanzine, what was the worst interview you ever did for an issue?
Tesco: The Misfits were never serious. You could never get a serious answer out of them. A lot of the interviews were like that. No one was really being straight. We were all goofy and silly. Trying to be funny. But that’s a good question.
Sean: So I went to the Touch & Go festival in 2006 and I was expecting to see you there. Why weren’t you?
Tesco: It’s kind of a long story, but not really. I didn’t have a band at the time. When I quit in ’96, I swore I was done. Hung up the phony fur for the last time. When Corey (Rusk) called me, it was maybe like a month before it was going to happen. I had heard some rumblings, but I didn’t have a band together. It was a major undertaking to get a band together. I should have at least gone and been there. But, what are you going to do? Touch & Go has been really good to me. They are taking all my stuff now and putting it in the download stream. So I’m really happy about that. I’ve got all my catalog back, so I own it. I have re-issued my CDs. I’m selling them all my website. 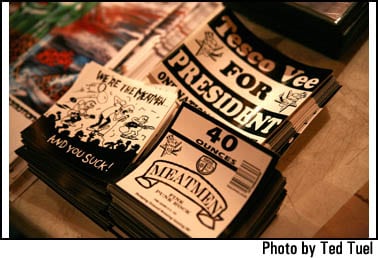 Sean: You grew up in the Midwest. What made you decide to move to the East Coast in the mid-eighties?
Tesco: I lost my teaching job. I was a school teacher. Around 1982, everyone was leaving Michigan, going to Texas for the oil boom. I came to visit DC and Ian (MacKay) and Henry (Rollins), the big boys in that little scene. I mean, it’s still a little scene. It just felt like home. It felt like someplace I could live. We lived there seventeen years. It was time to get out of Michigan. By the same token, by 1999 it was time to go back to Michigan. It’s just one of those weird things. My folks still live there. I love Michigan, it’s just that the economy there has always sucked. The music thing is apart of it too. If I want to move somewhere, I want to move where there is a cool music scene. It didn’t get any better for me than Minor Threat live. All those bands: G.I., Youth Brigade, Iron Cross, S.O.A., Double O. It seemed like there was always just something going on. House parties. The Detroit scene was great, too, back then. But people don’t realize how small those scenes were. It was like a hundred kids. And some ancillary suburbanites that would filter in and out. It’s kind of corny, but they were really magical times.
Sean: What were some of your favorite bands to play shows with?
Tesco: Bad Brains. Fear. Twice:1982 and 1995. Fear, to me, is one of the greatest. Love Lee Ving. Dead Kennedys. They’re okay. Minor Threat, The Misfits, of course. Negative Approach, Necros, The Fix. Those are my buddies. But in DC, we played with Black Market Baby; great double bills. Those guys were always just right on the money.
Sean: Favorite DC band and why?
Tesco:  It’s close, but I gotta say Minor Threat. Live, they were just unparalleled. They hated each other and it really manifested itself through the music. Their live shows were, to me, the pinnacle of punk. If I had to pick a sentimental favorite, it would be Black Market Baby. They were there to balance out the scales of musical justice. They were so refreshing, happy-go-lucky punk. But they were great! That album that they put out a year or so ago has so many great songs. It’s amazing they did what they did since they were so fucking drunk the whole time!
Sean: Were you a better host on your TV show than Bob Barker?
Tesco: Absolutely! We committed a budget for twenty-six episodes and MTV said, “It won’t play in Peoria.” We were just ahead of our time, I think. Now there’s like a zillion shows like that, Dave Atell’s Insomniac. But nothing as funny, clever, or original as ours. I guess I need to be happy with what I had: a couple of shows, one that aired at two o’clock in the morning! I’m happy to be toiling in the underground. That’s the way it’s gonna stay. 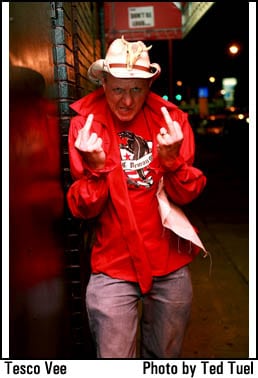