Interview with Strike Anywhere: By Rob Kent and John Miskelly

With their anthemic brand of melodic hardcore and Thomas Barnett’s informed and impassioned vocals, Richmond Virginia’s Strike Anywhere have earned themselves a reputation as one of the most inspiring political bands of their generation. In their ten year existence the band have released three full length albums—Change Is a Sound, Exit English and Dead FM)—and three EPs. What with the current fervor over Barack Obama, the collapse of the global economy, and the ever-present issue of climate change, now seems liked the perfect time to get Thomas’s thoughts on our politically uncertain era. This interview took place in the Bielefeld Ringlokschuppen venue, Germany, on February 9, part of their European tour supporting Rise Against. 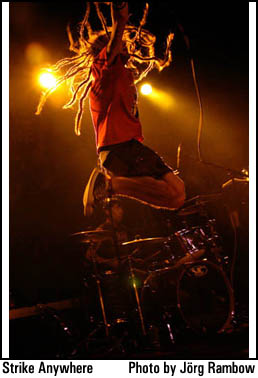