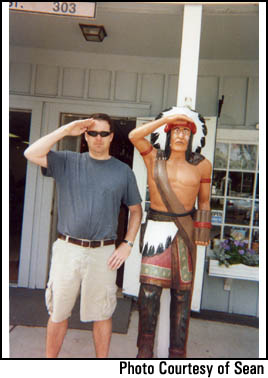 Lauren: Sean; you’ve lived in the DC area your whole life. Is there anything particularly awesome about Maryland that makes you want to stay, or just where you’ve gotten used to being after so many years?

Sean: I did live in the South for close to 2 years after college. It wasn’t totally awful but the music scene was just not up to snuff. I can consistently go to at least 2 cool shows a week in the Washington/Baltimore area if time allows. I did visit other cities that compared (Los Angeles and Seattle for instance) musically but this scene has always felt a little more open.

Lauren: Tell me about collegiate life from when you were in school. What’d you major in and did you end up graduating?

Sean: It was always entertaining, with different people seeming to fade in and out of my view screen every few months or so. I can remember some cool shows from my college era. Butthole Surfers with Government Issue. Lucy Brown blowing the ultra lame Spin Doctors off the stage. Fugazi at various DC locations over the years. I majored in communications-which back in the old days was called “radio, television and film.” It was immediately discontinued after I graduated! I minored in music and managed to graduate with a decent GPA, after starting out in the failure/fuck-up range. A true “pull yourself up by your bootstraps” story.

Lauren: You’re into all kinds of different music, right? Why do you write for a punk fanzine, as opposed to a magazine that covers metal, for example?

Sean: Punk has been my favorite music since college. I ended up buying more punk than seeing punk shows back then. But I think I have made up for that more in recent times. I still do listen to a lot of non-punk music, and metal has been creeping back into my cranium the last few years. I have started writing for another online magazine again recently, maybe some metal will sneak back in from the basement.

Lauren: Okay, so you played shows with some of the alternative radio rock stars in the early nineties. Can you say you’ve ever been starstruck, or is it cooler just to meet folks who are active in the punk scene?

Sean: All the encounters where there was the opportunity to be starstruck were too brief to really make a lasting impression. Maybe driving Joey Ramone to the train station in my piece of shit Chevy Cavalier ranks near the top. But in the past couple years meeting some musicians whose records I used to (and still do today) play non-stop has been amazing. I mean, if you had told me the day I bought the Mission of Burma 80 minute CD back in 1988 that I would one day be rapping with Roger Miller about Sproton Layer, I would have laughed in your face.

Lauren: Was the radio station that you interned at a corporate- owned gig, and have you had anything to do with radio since that internship?

Sean: Yes, it was basically for college credits, but I also did college radio on campus at the same time. Nothing after that unfortunately, I do miss rockin’ the mic at 4 AM on Saturday night.

Lauren: Would you say that setting up shows in DC inspired you to start a new band recently?

Sean: Sure-definitely a contributing factor. Since 99% of the time, both the promoters and the band members I have worked with have been really cool. So I guess that a rusty cog clicked in my head that said-“can I still do this?”

Reason for a road trip:

Sean: To go see a band that I will never have a chance to see otherwise. Too Much Joy in NYC May 2007 was the last one. Going to see 80’s UK icon Ian McNabb (The Icicle Works) this month for a one off in Atlanta, GA.

Thing about being married:

Sean: A wife who loves me for who I am and also puts up with most of my shenanigans.

Sean: Street Dogs interview because the singer said it was one of the best interviews he had ever been involved in. Then 6 months later the guitarist told me after a show that he had framed the article and hung it on his wall. That blew my mind.

Sean: Making bagels at a breakfast store. Life was a lot simpler when I only had to worry about different kinds of cream cheese!

Way to spend time with your kids:

Sean: Anything that they get a kick out of and their personality gets a chance to shine through is the cat’s pajamas for me.

Sean:  I’ll give you my non-punk ones-since everyone knows my punk ones from reading Razorcake. Paul Westerberg-49:00, Julie Ocean-Long Gone and Nearly There, Rob Dickinson-Fresh Wine for the Horses, Marty Willson-Piper-Nightjar, and Whitesnake-Good to be Bad.

Sean: Now that I’m in the ‘burbs, The Quarry House in Silver Spring, MD is the place to beat. Good beers, tater tots, and great local music too.