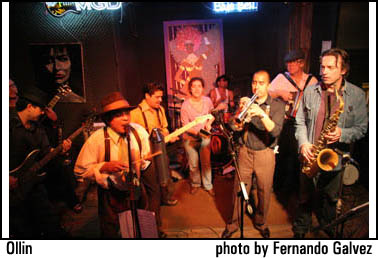 Interview With Ollin: By Joe Dana

­            Many of my friends have started to purposely miss the opening act at shows. The argument is that the opening act usually stinks. Some even believe that larger bands pick a sub par opening act on purpose. After all, if you’ve been forced to hear a band suck the life out of an audience, anything listenable will sound better. I understand the skip the opener sentiment but don’t follow it. Who knows what band you might catch on their way up into massive appeal or into your record collection? This can lead to hilarious situations like being able to say that you’ve seen Blink 182 six times and never liked them once. However, it can also lead to statements like, “I saw Toys That Kill open for Dillinger 4 a few years back and now they are one of my favorite bands.”

On one particular day, I found out that Ian MacKaye’s latest project, the Evens, would be playing at Self Help Graphics in East Los Angeles. The venue was formerly known as the Vex. (Technically, it was the Vex’s first location). The Vex housed many East L.A. punk shows that I had heard about for years.

The opening act, Ollin (pronounced "oh-leen"), blew me away. They played a mix of traditional Mexican music, Irish folk music reminiscent of the Pogues, and Jewish Klezmer music. The Rodarte Brothers, Randy and Scott, fronted the band and had everyone standing and clapping for more. You could tell that even though the music was not hard that the spirit of punk rock was there. They then informed the crowd that they’d be performing the entire Rum, Sodomy, and the Lash album by the Pogues for St. Patrick’s Day before covering a Pogues song. They talked about teaching music to kids who were huge Minor Threat fans.

Who were these guys?

I didn’t hear anything again from them for a few years until the Pogues got back together. I got to the Wiltern in time to see Ollin opening for them. I had almost completely forgotten about the Self Help graphics show. They were even better than the first time, as they had added more members and more instruments. It was like watching a huge musical party. The Pogues even joined them on stage.

No. Really. Who were these guys?

Ollin’s new EP, San Patricios, takes its title from Irish-American soldiers who abandoned the United States Army to fight for Mexico in the Mexican-American War. The EP continually jumps genres and marinades itself in the cultural history of Los Angeles.

I got the chance to talk to one half of the Rodarte brothers, Scott, about his amazing band that has me thinking Bar Mitzvah music can be cool.

Joe: So I have to know. How did the Pogues thing come about?

Scott: That was so much fun. We met them a week before we opened for them. We were playing the Fillmore; not the main stage but the small stage. Spider Stacy (singer and tin whistler of the Pogues) caught us and wanted us to open for them right away. He got on the phone right there and then and made some calls. The record company and the venue were trying to get all these punk rock groups of the Irish variety to play, but he insisted that we open for them.

Joe: When you played with the Evens, you seemed to be a smaller band and now the band seems huge. Who are the newer members?

Scott: Great musicians and friends have been through this band. Now it kind of reads like a who’s who. We got Jon Wahl from Clawhammer on sax. We got Vincent Valdez, who has played with Ry Cooder, on trumpet and a bunch of others.

Joe: I hate asking this, but I feel we really need to know the entire history of Ollin.

Scott: It started in the mid-‘80s with me and my brother playing punk rock. We played in Fishhead and Butt Acne.

(Although he sang once 'cause Scott was MIA, Randy wasn't a member of Butt Acne, and Scott wasn't a member of Fish Head. Scott was Butt Acne's vocalist/bassist (with my brother John and I) and Randy was Fish Head's drummer (along with John on vocals). Both did play together in Peace Pill, though, and all three of us were in the Tumors and Ollin together. –Jimmy Alvarado)

Actually, there was a Razorcake article once that had a whole family tree of East L.A. punk bands. It was done by…

Joe: He’s like my favorite writer over there. You mention an East L.A. punk rock article for Razorcake. Chances are he did it. (Incidentally, the article we’re talking about is now available on the Razorcake website.)

Scott: Jimmy was in the original Ollin.

Scott: So we were like fourteen in Butt Acne and then we moved to Berkeley. I started listening to Los Lobos and other folk music but I hate “La Bamba.” This brings us to 1993 when we’re like twenty-two or twenty-three and moving into Highland Park. That is where we plugged into the Chicano political scene and learned about Cesar Chavez and started hating white people. We’d play half a set electric, like the Bad Brains, and the other half acoustic. Then about 1997 we got into Ozomatli and had our first output. We were on the Sample This! compilation on BYO Records. My brother started studying more and got his degree and we’d play whenever we could. Around 2000 our first record came out and we kind of came into our own and found our voice. We also have recently begun to embrace the look of the Pachuco. If you learn about that zoot suit era, you find that the pachuco look was a really punk rock style back in those days.

Joe: What forms of music would people be surprised to hear is a part of your sound?

Joe: Where does the Klezmer music come from?

Scott: We lived in an old optometrist’s office in Boyle Heights. Boyle Heights used to be a Jewish neighborhood. Our mom used to work for Dr. Friedman’s Medical Clinic and he’d play us all this stuff. We’re just recovering punk rockers. This is the music we used to make fun of. We’ve just rediscovered these world sounds.

More info about Ollin can be found at: http://www.ollinband.com/