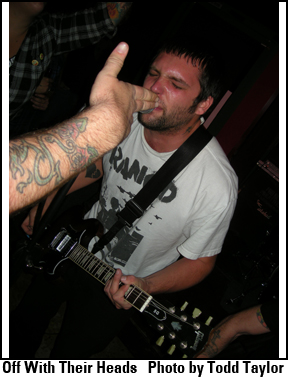 Interview With Off With Their Heads: Turning fuckedupedness into anthems. By Todd Taylor

How to turn disease into celebration? How to turn fuckedupedness into anthems? How to lay bare crippling emotions into songs that fat, hygiene-questionable dudes will sing along and spill beer to? I’m no emotion scientist, but I do know that Off With Their Heads twist what—on paper, parallels—the contents of a Smiths song and pretzel it into gruff, punchy indictments that’ll make any DIY punker grimace along to in acknowledgement: “Shit’s bad. I’m a fuckup. I’m self-aware, but I don’t learn dick. My emotions are a twelve-car pileup. Mangled bodies are strewn on the icy interstate of bad choices…and my first reaction is to laugh. Beer me.”

What could be the musical equivalent to emotional tree sap on the windshield of some crybaby’s despair, OWTH turn into scream therapy. Not a bad trick for a self-proclaimed pop punk band who say they can barely play their instruments. Off With Their Heads are a very good band. I recommend listening to them.

Portions of this interview originally ran in Thrasher Magazine.

Todd: Is there any validity that Off With Their Heads is kind of like the Smiths of late 2000s DIY punk, but with less moping and more aggression?
Ryan: Absolutely. [laughs] That’s a weird question. If anything, I’d say there’s more moping.
Todd: So, why is there so much moping in Off With Their Heads’ lyrics?
Ryan: It wasn’t intentional. We just wrote a few songs like that and it seemed to work and that’s what sets it apart from the other dumb pop punk bullshit stuff. And I’m crazy. [laughs]
Todd: In what way are you crazy?
Ryan: I don’t know. At the time—when we started—lots of drugs, then less drugs. Now just getting older, wearing in my brain: “Oh shit.” I don’t ever know how to describe something like that.
Todd: What do you think has most changed from when Off With Their Heads started ‘til now? Someone who’s only a casual fan can still pick up on your thematics: things are pretty fucked, you’re emotionally worn, you’re fucking up.
Ryan: There’s always ups and downs. It never really went away; all the stuff we write about. There’s always something. All that stuff in those lyrics is that day. People think that I’m like that all the time. Clearly, I’m not. I can blow up a shitty day into a big deal. That’s the one thing I’m good at, I think.
Todd: Have you ever edited out a happy song from an album or play list?
Ryan: No. We only have two happy songs and they’re not even that happy. I did ‘em because, “Fuck, alright. Shit’s cool.” And everybody hated ‘em. It’s totally true.
Todd: If you were a woman and you just listened to Off With Their Heads, would you go on a date with Ryan Young?
Ryan: That’s funny, ‘cause my girlfriend I’ve had for about seven months, was a fan of the band before and that’s kinda how I met her. “Why would you have any interest in putting yourself in that situation?” That’s what I said. Totally red flags. And she’s all, “Oh, I don’t know. Whatever. It’s your art.” But now her parents bought the CDs. That’s a whole different story.
Todd: Any feedback?
Ryan: I haven’t heard one word about it.
Todd: Who is in the band this week, and why is there so much turnover? Seeing you guys within two weeks, I’ve seen different lineups of the band.
Ryan: How that works is I just like touring. A lot. Justin just bought a house, so he can’t tour much. We just find people to do it. That’s how we’ve always done it. “Alright, if you can’t go, we’ll just find someone.” There’s rarely ever any hard feelings about it. Mario’s the nineteenth or twentieth member of the band now. Mario played drums all the way from Chicago to here, L.A. It even switches up in the middle of tours. I think it’s awesome. It’s fun playing with different people. It keeps the shit interesting.
Justin: We learned early on that if you don’t have any rules for it, it makes it so much easier. Anybody who feels like they can jump on—carry on.
Todd: Has anybody just flat-out quit?
Justin: Not as fast as we can kick ‘em out. [laughs]
Ryan: We’ve made people quit. That’s all I’m gonna say. 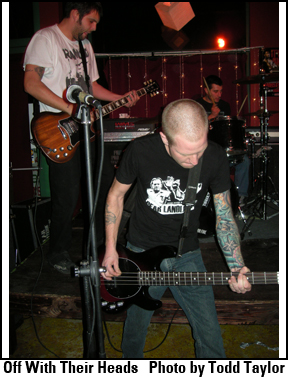