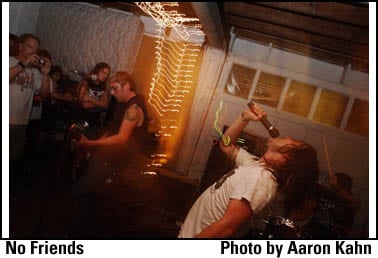 Interview with No Friends: I’m personally never too busy to rock. By Dave William

Stepping away from the proverbial pack in the modern hardcore climate is no easy feat. A genre that more-often-than-not prides itself on accuracy of imitation doesn’t exactly leave a lot of room for personality. Luckily, for those of us who desire something more than recycled Ginn-isms and predictable breakdowns, there are still hardcore bands who opt for less-travelled sonic avenues over regurgitation, who choose not to forsake melody and songwriting in favor of speed and simplicity, and who can look further than those first few years of hardcore’s heyday for inspiration—nodding to their influences with subtlety and taste when they do showcase them. There are bands like No Friends out there.
Born in the wake of New Mexican Disaster Squad’s dissolution and enlisting Municipal Waste’s Tony Foresta as frontman, No Friends have created two of the best true hardcore releases in recent memory: last year’s phenomenal self-titled LP on No Idea and the new Traditional Failures EP on Kiss Of Death. Taking cues both from their past and current projects as well the full gamut of classic and modern punk and hardcore, No Friends are a much-needed breath of fresh air in an otherwise generally stale setting—so take’er in deep. 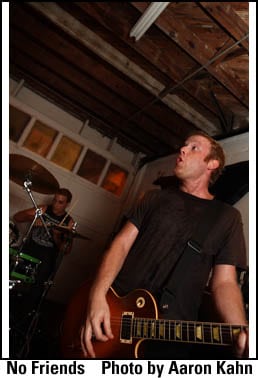