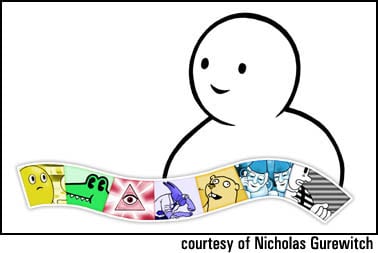 Interview With Nicholas Gurewitch: Author of the Perry Bible Fellowship By Daryl Gussin

Nicholas Gurewitch wants to consume a couple of hours of your life. Actually, I don’t know that. Maybe I should have asked him that in the interview. All I know is that when I first stumbled across his webcomic, The Perry Bible Fellowship, his work consumed a couple hours of my life. Reading one, two, or even twenty wasn’t enough. I had to start at the beginning and steamroll through strip upon strip of hilarity. And while there are many really funny webcomics on the net today, PBF stands above the rest by containing really beautifully done artwork. I don’t know much about art, but no one can deny that Nicholas is a fucking artist and is really fucking talented. If you’re into dark humor and have a couple hours to spend in front of your monitor, it’ll be well worth your time to check it out.

Daryl: Who was the last person you had a bizarre conversation with?
Nicholas: Every conversation I have with my friend Steve is pretty bizarre. He stopped by today to cram a bouquet of flowers into my mini-fridge, and talk about how even unorganized religions are prone to corruption.
Daryl: When was the last time you had a conversation that gave you a great idea for a strip?
Nicholas: I can’t remember any conversation, directly, providing inspiration for a strip. I don’t talk to too many knights or scientists or dinosaurs.
Daryl: How long do you usually take to work on a strip?
Nicholas: Every strip is a different experience. Sometimes, I’ll conceive of a strip in a moment and go on to comfortably illustrate it over the course of a week. Sometimes just coming up with an idea is a grueling, seventy-hour marathon in which I throw items around my studio, and go into staring fits like Jack Torrence in The Shining. There’s no usual. Sometimes the writing process is greatly alleviated by a few brilliant friends who share ideas with me, and give me feedback on sketches.
Daryl: Do you have any specific reasons why you incorporate different styles of art in your strips?
Nicholas: It’s exciting to try something new. Can you imagine staring at a single sheet of paper for more than a day if it wasn’t an adventure?
Daryl: Are you usually familiar with the style, or at least have a history with it before you illustrate the comic?
Nicholas: Not always. Sometimes I’ll just see an ad in a newspaper and think to myself: “I gotta try that.” Though I’ve only ever fully imitated artists whose work I’ve long been familiar with. 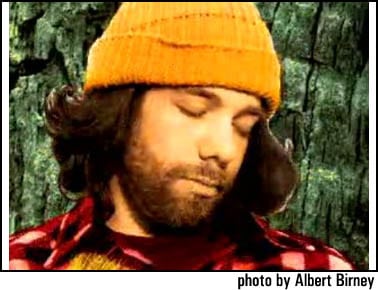 Daryl: It’s interesting when people find inspiration in something as offensive as advertising. What really impresses me about your strips, other than how insanely funny they are, is how different they all look. But all the early ones are all in the same style. What prompted the move to experiment with different styles?
Nicholas: Again, probably just adventure. Something new.
Daryl: Do you have a formal background in art?
Nicholas: A few classes in high school and college.
Daryl: Do you think that those courses have had a significant impact on the art you currently create?
Nicholas: I still have the watercolor set my high school art teacher let me steal. I use it just about every day. That seems significant.
Daryl: That is significant. What are your feelings on webcomics and T-shirts sales. A lot of webcomics sell T-shirts that are featured in strips and I wonder how many times artists put T-shirt designs in their strips just to sell them.
Nicholas: T-shirts might be internet comics’ way of having a go at being physical?
Daryl: In what sense?
Nicholas: In the sense that they don’t always get a chance to get off the computer screen otherwise. Though maybe there’s just a T-shirt craze going on right now. Actually, I think there is a T-shirt craze going on right now. It seems like the chest has fully overtaken the brain as the number one place to be clever.
Daryl: Are you suggesting some other kind of craze is in order?
Nicholas: Crazes are never in order.
Daryl: Do you think it’s necessary for an artist to make the distinction between art and entertainment?
Nicholas: I wouldn’t leave it up to an artist to be able to make that distinction. Nor do I think it’s a necessary one. There’s so much overlap between the two. Though it’d probably be beneficial to distinguish between what you want to do, what you can do, and what will be appreciated.
Daryl: It seems a lot of the time it’s an entertainer’s job to entertain, and an artist is simply an artist. How do you deal with being an artist who is very entertaining?
Nicholas: I don’t think I’m the one who has to deal with it. I think that’s what readers do.
Daryl: What is the ultimate goal for a comic strip artist who could never be featured in a mainstream publication?
Nicholas: Well, a couple of the syndicates have expressed interest in working on something, but I’m not ready to go that route. If I have any specific goal as an artist,
it’s to remind people of some things they may have forgotten.
Daryl: Would these syndicates expect you to make your content less abrasive?
Nicholas: I’m sure.
Daryl: How would you feel about cleaning up your strip? Do you feel like one day that time will come? How many pedophilia jokes can one person really make?
Nicholas: Only two. I’ve never found any of my strips to be too dirty though. I’m usually prone to seeing the point of them. Comics have the historical association with being children’s material, so I guess that makes naughtiness in a comic strip “controversial,” even while naughtiness for a stand-up comic is simply a prerequisite.
Daryl: Do you ever feel like you have to make your strip controversial?
Nicholas: I feel a compulsion to find what’s hidden. Dig up the secret subjects, sure. My friends can probably attest to the fact that I always fidget with locked doors when I find them.
Daryl: Have you ever done any flyers for shows?
Nicholas: Yeah. In college I did a few I think—mostly for my improv troupe.
Daryl: Has there ever been any major misunderstanding with the message of your strips that you’ve received a lot of heat for?
Nicholas: The misunderstandings that hurt are the ones that can’t be chalked up to a reader’s phobia, but are the failure on my part to communicate some basic idea. When someone speculates that the cat is flying in the middle frame of the comic strip “Mittens” because its pee mingled with the magic carpet, stuff like that makes me question what it is I’m doing. It damages my faith in the medium. 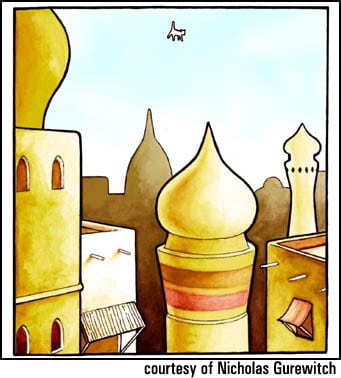 Daryl: Every medium is open to misinterpretation. Is there anything else that troubles you about webcomics?
Nicholas: Fonts. I think I miss hand-written text. Most people use fonts.