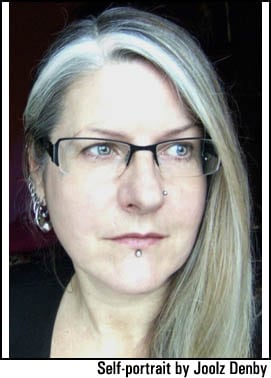 Watching the New Model Army in Seattle this spring, I noticed something I hadn't seen before: lead singer/ guitarist Justin Sullivan has tattoos - a few of them. Sullivan’s partner Joolz Denby - punk poet, novelist, the cover artist behind the New Model Army’s LPs and the primary force behind the band’s iconography - has a long history with tattoos. Sullivan normally shies away from talking about his relationship with Joolz in interviews - he’s a wisely private man when it comes to the press - but he was more than willing to share some information on the topic of tattoos.

Joolz’s website includes both fiction and poetry from the author and a “tattoo design boutique” showcasing her work: http://www.joolz-denby.co.uk/. The majority of my interview with Justin appeared in Razorcake #46.

Allan: Let me ask about tattoos, as something you and Joolz have got in common...
Justin: Well... I have tattoos, which I really love, but I’m not heavily tattooed. Which Joolz is. She’s also a tattooist these days. I think there are two or three reasons for that. She told me once that when she was a little girl, she read an adventure book which she’s never been able to find again, about a little girl that was shipwrecked in the South Seas, and was taken to an island and tattooed by the natives and given the status of a true island tribal native, in a very romantic, Kiplingesque sort of way. Secondly, she grew up in Portsmouth, which is a naval town, so the front of Portsmouth was filled with tattoo parlors, where all the sailors would get tattooed. These two things fuelled her imagination as a young girl, and she became fascinated with it at a very early age; but also I think, as an artist, she was interested in the possibilities. She had about the first or second Celtic armband ever done. In about 1979, she met a Welsh tattooist called Mickey Sharpz, who has since retired, but was a very influential tattooist in the rebirth of tattooing which has happened in the last twenty-five years. She had his first Celtic tattoo, and so on. She’s a bit of a trailblazer in that whole world.
Allan: I remember seeing her on TV here in the 1980s, on a cable access TV show called Soundproof. She read some of her poems and showed a black rose on her ankle - there was a famous Vancouver tattoo artist called the Dutchman who she wanted a tattoo by, though she tells me now she never got one...
Justin: I don’t think she had any in Vancouver. I can’t remember. She certainly had a very famous Samoan do a tribal piece on her when she was in New Zealand.
Allan: Oh, really?
Justin: She has a lot of tattoos collected from different artists.
Allan: Has she done any of your tattoos?
Justin: Yeah, she has - she’s done a fish on my foot, a hand tattoo on my foot, which, I have to tell you, was immensely painful, but I actually really love it. Rather like I love all Joolz’ artwork, which - not unlike our music - is very organic. It’s never quite graphically perfect, you know what I mean? She doesn’t have that thing as an artist about graphics; she’s quite into a sort of “tribalistic iconography” style of art. And the other thing is, she’s always - rather like the band - looking to do something new. When she started to do Celtic artwork in the middle of the ‘80s, it was all quite new, y’know what I mean?. There had been this big Celtic revival at the end of the 19th nineteenth century in Victoriana, but since then it had been not very fashionable. It had a lot to do with her that it became very fashionable in the mid-1980’s - the Thunder and Consolation cover and so on. When that wave broke, and it became really big in the ‘90s, she suddenly moved on to doing very different things. As a tattooist, as an artist, you know... when something she’s done becomes kind of mainstream, she’s already moved on to something else. “Done that, move on.”
Allan: I wonder about the Red Sky Coven albums that you and Joolz have done together. I’ve never seen any here.
Justin: They’re not released. We just kind of sell them at the shows, though we haven’t done a show as Red Sky Coven for about five years now. And we do them on the internet. It’s a kind of cult within a cult. But it’s based on the fact that myself and Joolz and Rev and Brett have been best friends for twenty-five years.