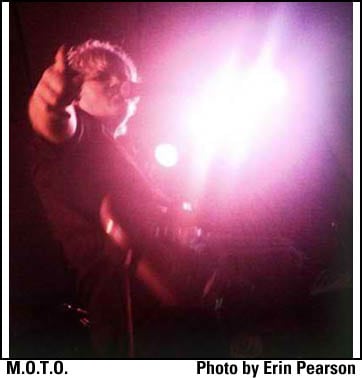 Interview with M.O.T.O.: By Sal Lucci

M.O.T.O. is about to celebrate thirty years as a band and founder Paul Caporino is showing no signs of slowing down. Caporino has lived all over the U.S., playing with endless lineups of M.O.T.O. and releasing everything from homemade recordings dubbed to tape to full studio albums. He recently relocated to his birthplace of New Orleans to play with original members of the band. A new album (No Way Street) was released in late 2010 and much of M.O.T.O.’s back catalog is being reissued. I first heard M.O.T.O. on a mix CD a friend made and have been hooked since. Their sound is simple: catchy Ramones-y rock’n’roll with searing solos. I was surprised I hadn’t heard them sooner, since Caporino spent a majority of his life in Chicago and I’ve always been a big fan of Chicago bands. I haven’t met anyone who’s heard or seen M.O.T.O. and didn’t become an instant fan. Despite lyrics that range from lovelorn to down right out there, Caporino is a private, unassuming, and shy man. This interview was conducted over email in late 2010.

Sal: Why’d you move back to New Orleans? You’re from there originally, right?
Paul: Yes. I was born and raised in Uptown, New Orleans. I moved back because I got tired of living up north and I wanted to play with the original band again.
Sal: How was Providence, Rhode Island?
Paul: Providence was okay, but after having lived in Chicago for twenty years, Providence just seemed too small and quiet. I was only there for five months.
Sal: What made you choose Providence? Friends?
Paul: I wanted to leave Chicago and I thought I’d move to my friends in the Midnight Creeps in Providence. I liked my friends and some of the people I met, but I didn’t take to Providence. I was just tired of living up north.
Sal: Where else have you lived? How long in each place?
Paul: I lived in New Orleans from 1960, my birth, to November 1987, when I moved to Boston and re-formed M.O.T.O. with Beck Dudley on drums. M.O.T.O. started making records and touring then. In June, 1989 we moved to Chicago. Beck quit to get her Master’s degree in architecture, so I continued playing with other band members. I kept making records, CDs, cassettes and toured a lot. Then I broke up with my wife of seventeen years in 2009, and I didn’t want to live in Chicago anymore. So I moved to Providence and lived downstairs from Jenny and Jami of the Midnight Creeps. Jami and Corey from the Creeps played with me in M.O.T.O. But I had to move back to New Orleans.
Sal: I never saw the Midnight Creeps, but I’ve seen the Sleazies. Didn’t they share members?
Paul: Jami from Midnight Creeps is also in the Sleazies. For a guy in punk bands, he’s very well organized and efficient. Also a very good musician. 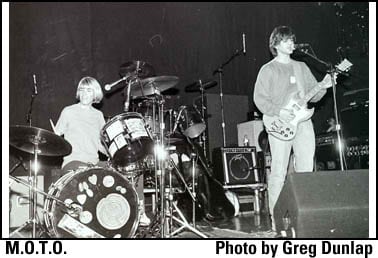 Sal: What made you leave New Orleans for Boston?
Paul: At the time, New Orleans wasn’t happening for me and I’d always wanted to live somewhere else. So when the opportunity arose, I took it.
Sal: Tell me about Beck Dudley and how you met her.
Paul: Beck Dudley heard a M.O.T.O. tape played by Ken Kurson, the bass player of the band Green from Chicago, and she wrote me a letter, pre-internet, wanting to buy a cassette. From then we became pen pals, and in September 1987 she visited me in New Orleans and convinced me to move to Boston. We became boyfriend/girlfriend for a while, and she let me know that she played drums. So we reformed M.O.T.O. as a duo. This was way before the White Stripes.
Sal: When did you actually start M.O.T.O.? Why?
Paul: We started M.O.T.O. in 1981 in New Orleans. I had been in cover bands before but I wanted to have a band that played its own songs.
Sal: When did Masters Of The Obvious become M.O.T.O.? Was there an official transition?
Paul: Not really. I noticed while watching the Live Aid concerts on TV in 1985 there was a guy in the crowd swinging a U2 flag around and I thought, “Masters Of The Obvious wouldn’t read well from a distance.” So we shortened it to M.O.T.O. We had been calling ourselves M.O.T.O. anyway. I added the dots later so that people wouldn’t write it as “Moto.” All capital letters. It looks better.
Sal: So how active was M.O.T.O. between 1981 and 1987?
Paul: We didn’t play that many shows. We did some home recordings, but there were big gaps in between. But we tried. And we’re still trying.
Sal: Why wasn’t M.O.T.O. a bigger part of the 1990s Chicago scene? It seemed like Chicago was the place to be for a few years. Some of the bands I remember are Screeching Weasel, Vindictives, Mushuganas, but I don’t remember M.O.T.O. ever being mentioned with these bands. Somehow, I knew of the Chicago scene even as a young teen in suburban New Jersey!
Paul: We didn’t get bigger in the 1990s because we didn’t try hard enough and we didn’t play our cards right. Plus, all those bands you mentioned I didn’t pay attention to. We were closer to the indie scene—Drag City Records, etcetera—and the power pop scene—Material Issue—than the punk scene. We didn’t really get with the punks until about 2000 or so. I’ve heard of Screeching Weasel but I don’t know any of their music. The other two bands don’t ring a bell at all. We were just part of a different thing during the 1990s. I’ll be honest; I don’t really listen to punk bands much anymore. We might have songs that sound punk, but we’ve never been a punk band. Maybe garage rock, but we don’t have much in common with them either. We like the Beatles. 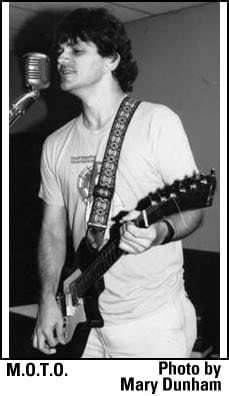