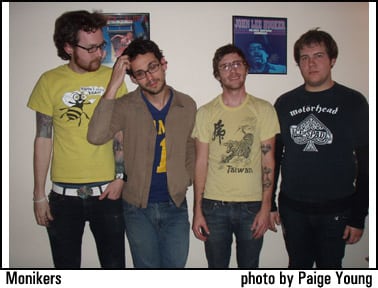 Duct tape keeps the mic from falling as Monikers vocalist Ryan Seagrist forces his raspy voice out to address the small group assembled for the house show.

Comforters have been shoved into window frames to muffle the noise and make sure that no sounds escape. Plaid. Green. Striped. Some so worn you can’t even make out the pattern it initially had. But they’ve been revived with a new purpose to make this house show possible.

Down the street, a cop car is perched at the intersection of Bumby Avenue and Page Avenue. The light from his laptop illuminates the bored expression on his face. The residents of 1944 Page Ave. have succeeded in masking the activities inside:

Visiting from St. Augustine, Alligator take makeshift stage first. As a three-piece, they set up quickly.

“Wait a sec. Where’s Jeff?” a friend from the audience asks. “I just noticed he’s not here.”

Shrill bird noises shriek from his amp in the form of violent feedback as Jacob tunes. Ryan comes to the rescue, tossing him a guitar cable he unearthed from a beat-up brown leather case.

Alligator are finally ready to start, and Jacob plays the first few notes, then stops, leans into the mic, “Jeff usually starts this song off. Here we go.” After a set dominated by heavy drum beats, the crowd seems revved for the main attraction. Monikers, up next.

Monikers is a band dedicated to the state they’re from, where each band member has achieved his own popularity in bands throughout the state. Ryan and Jon Murray both reigned in the South near Boca Raton in their youth before moving North and gaining success in bands New Roman Times and Mightaswell, respectively. Mark Bonner tore up the Orlando scene with rock band Country Slashers before moving on to become bass player for the original Monikers. With such strong local band bios to secure their reputations, Monikers were easily able to secure dates at popular venues throughout Orlando, making sure the city took notice when they first formed.

With so much talent, fans would expect them to be cocky about their music, but instead they’re critical of any band that takes itself seriously.

“If anyone really thinks they are doing anything remotely novel in the world of music, they're just fooling themselves.”

Ryan is perhaps the most authoritative figure of the bunch on music because of his vast experience playing and touring with big hits Discount and New Roman Times. Playing in major bands since junior high, he’s grown ever more honest in his descriptions of what he’s doing and why:

“I really couldn't try any harder. There was one song that I wanted to cover, and I thought, "Why bother?" Instead, I just completely ripped it off. It's very unlikely that the band will ever hear us, nor does it matter. They're not going to get any money.”

Still, all the pessimism in the world couldn’t keep the catchiness out of Ryan’s songwriting. In his songs he writes vaguely about most topics, including the absurdity of making an effort and his disappointment in an old friend. It’s difficult to catch a note of this in Ryan’s voice while he’s singing, though, because he’s professionally unaffected by the lyrics when performing.

It’s up to the crowd to react, which they nearly always do.

At a recent show at Austin’s Coffee, Monikers played to a large crowd despite the smallness of the venue. Rather than cater to the people sitting at the tables inside the coffee shop, Monikers chose to face their instruments towards the spectators outside. With a pane of glass separating the band from the fans, Monikers upped the punx, playing in an even more rowdy and careless nature than usual. 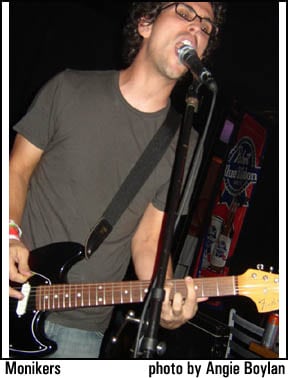 Taking the cue from the band, most of the people sitting inside rushed outside to watch what truly transformed into a beastly spectacle:

Raucous fans ripping down their pants to rub their asses against the glass. People toasting the band and dumping beer over the glass divider. The crowd pressing up so hard against the glass that it bowed inwards causing one spectator a lot of distress.

Dressed in camouflage with a bandana wrapped around his head, he stood out from most of the patched-up, Levi’s denim-loving crowd almost from the start. A bit older than the others too. He seemed to be on the lookout for under-aged drinkers, but no one claimed him. The people working for the venue didn’t know him. He didn’t seem to have any friends among the crowd. He was a self-appointed police officer and he was treated as such.

By the end of the show, bass player Jon had thrown his guitar at drummer Scott Pappelardo, which the drunkenly under-aged Scott responded to by leaping on top of guitarist Mark, crushing his much smaller frame and forcing him into a public make out fest.

Mark says it’s difficult to assess which songs the crowd is liable to respond to at any given show.

“It really seems to be different all the time. Whenever people respond to any song, it really surprises me. The only time I can actually remember people singing along and dancing was at the last show at Fort Booyah in St. Augustine, Florida. Those kids are nuts and I still can't believe they knew our songs.”

Monikers have emerged as a leading Florida punk band. Signed by Kiss of Death Records in the company of also talented New Bruises and Witches With Dicks, they continually impact the punk movement in Florida by playing shows consistently and constantly.

“Mark is really dedicated to Monikers 100%. He's always stoked on booking/playing shows, putting out records, touring, and just getting stuff done with the band,” Scott says.

Up ahead for Monikers is an East Coast tour starting March 9, and ending March 18. The band’s making stops in Virginia, DC, New York, Jersey and others, mixing it up with both house shows and venue dates.

“In Richmond, we are playing with Pink Razors and they are one of my favorite bands, all really solid dudes. So, I guess that is the show I am looking the most forward to. But, all of the shows are going to be with Witches With Dicks and New Bruises and those bands are seriously two of the best things to happen to punk music in a really long time,” Mark says.

Back at the House

Back at 1944 Page Ave., Monikers are taking a really long time to set up. Both Ryan and Jon are feeling sick because something like twenty million cats live in the house and they have severe allergies.

While they’re waiting, members of the crowd break off into smaller groups talking about various things in life that hold them back. It seems like everyone is working in the worst place imaginable.

Dramatically, someone declares, “It makes me question all of humanity,” which gets a laugh, but a sober one.

Finally, Monikers are ready to begin their set. Ryan steps up to the mic and announces the first song. “Not the New,” which has become one of the band’s favorites to play because of its brevity and jam quality.

While playing, Ryan confronts the microphone as if it’s an abusive father, coming as close as he possibly can and shouting the lyrics at it in his notoriously coarse voice. When he sings, he’s always raising and dipping, which sets the pace for the audience to start moving along with him.

Beside him, Mark strums the guitar so furiously that he subconsciously drifts backwards. In such a small space, one might worry about him knocking over one of Scott’s cymbals but he always corrects himself before damage is done. He seems to be so completely involved in his playing that he could do no wrong.

“I pretty much just play the songs that Ryan writes and luckily he is pretty good at it. I don't really know where to begin to describe our sound; it is very complex,” Mark says. “Jawbreaker playing Crimpshrine songs half ass should sum it up.”

The next half ass song on the list is “Unemployed.” Ryan dedicates the song to Scott who was recently fired from a bakery for eating a bagel that was about to be thrown away at the end of the night. Uptight companies.

Although unemployed, Scott has some criticism for his band mates, who are all currently employed by Whole Foods Market.

“I might be unemployed, but the evil company of Whole Foods keeps down the other members of the band,” he jokes.

Just then Scott completely screws up mid-song, but almost seamlessly, with four taps of the drumsticks, Monikers are able to pick it right back up. Throughout the rest of the set, Scott bites his bottom lip while drumming. In front of him, Jon’s bass guitar rests heavily against his lean frame, causing him to lean backwards slightly in a pose as natural as a smoker leaning against the wall outside a bar.

Stealing swigs of beer between songs, the band finishes the set in high spirits. For most of the guys in the band, house shows are the way to go. Playing songs they love to familiar faces in a tight corner with no tabs and no limits. Still, every band has to move forward, even if they are determined to remain unsuccessful.

“Our utter abhorrence of the prevailing music industry and our commitment to stay as unsuccessful as possible may have hurt us in the past. And our biting sarcasm,” Ryan says.

“Yeah, Ryan is a sarcastic prick of a nice guy, but I wouldn’t change a thing,” Jon adds.

With a ten-day tour up ahead, it seems Monikers may be taking their sound and actually going places whether they like it or not. When asked what direction he says Monikers are moving in the future, Ryan stayed true to his nature in his response.

“North. Definitlely North. Maybe a little West, but not too far. We can't go any further South.”