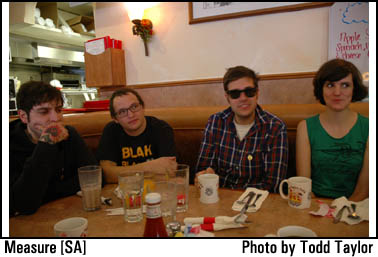 Interview with Measure [SA]: ''There was vomit in the pocket of his sweatshirt.'' By Todd Taylor

The Measure [SA] is an extremely talented band. They’re able to occupy shared space very nicely. By that, I mean they’re both rockin’ and thoughtful. They’re poetic yet plain spoken. They’ve got boatloads of integrity but aren’t interested in steamrollering listeners with dogma. Their songs are romantic without the sap, poignant without brittle preciousness. Not to put too fine a point on it, I think they’re a wonderful band. They just happen to be clustered in punk, and everyone seems fine with that. They just happen to be sweet people, too. If you want a big dose of them, I highly recommend their collection LP One Chapter in the Book: A Collection of Standard Waits and Measurements.

I’ll come right out and say it. I’m super anal when it comes to interviewing bands. That’s why I only interview bands I downright love. I pretty much demand the interview happen in a quiet place. Otherwise, it’s off. No backstage-during-soundcheck nonsense. No, “let’s do it in a bar and drink with our friends” stuff. What most people don’t realize is that there are no magic elves who transcribe what’s recorded. It’s a grueling gig in and of itself when every word spoken is crystal clear. I don’t want to struggle to decipher what people say while wrestling around the notes of a Bruce Springsteen tune blasting in the background over and over again. I try to limit anything that will lengthen the already-daunting process.

But life is funny.

Vince started helping out with Razorcake over a year ago. I like Vince. We have great talks about philosophy (his major). He’s wicked proficient in ‘90s punk to the present, and he’s a mild-mannered, no bullshit dude. I’ll take responsibility for this one. We drove the thirty miles from Highland Park down to San Pedro, California. And, as my mom taught me when visiting friends, it’s always nice to bring something along to share. Vince and I bought a cube of Tecate. It wasn’t that late, maybe around 3 PM. I had some soft errands to run down in Pedro. Vince articulately recited a couple of questions to me he had prepared for the band. By 2 AM when the interview actually commenced, I thought, “I have learned an important lesson. No beer for Vince before sundown.” During the show, Vince pulled some crowd-surfer-of-one action and, later that night, was to forget micturating in a place unbecoming of a gentleman.

Such are the risks we run in our profession.

And since we’re on the interweb and I feel like talking, what evolves as a subtext in this interview is a group of people being very kind to an overly drunk, good dude. Keep in mind that none of these folks had met Vince prior to that day, and I’d only met them a couple of times. Vince, literally and figuratively, walked in and out of the conversation, got on a skateboard with everyone wincing for his well being, and was generally non-linear.

Here’s another thing that may help a bit. Mikey is formerly of The Ergs!. This interview took place in the silk-screening basement of the fine San Pedro band, Killer Dreamer.

Interview by Todd Taylor and Vincent
Transcription by Vincent

Todd: When’s the last time that music made you feel superhuman?
Fid: Like a fuckin’ hour ago when we played. Every fuckin’ night. Seriously, man.
Mikey: It does have to do with playing a kickass show or playing to a bunch of people who really love your band. They know your words.
Tim: Just seeing even two kids singing back what Lauren’s singing is really cool.
Lauren: That’s always been my thing. That’s my line of demarcation. When people sing along, when you can tell that people know the songs already, that’s the point. It’s nice to see people…
[Vincent brings up Reggae Monkey, a sticker he saw earlier in the evening and now sees in the practice room that the interview is taking place. Vincent is fixated on Reggae Monkey. Fid brings up Riverside for the save. Tim takes the baton and runs with it.]
Tim: Like the show that we played earlier today in Riverside at Party Marty’s house. We rolled up when the first band was waiting to play. Party Marty gave us this spiel about how all these kids came out of nowhere. Then, immediately, the first song we played, all these kids were singing along. Everyone was having a good time, giving everyone beers. I was like, “Wow, all this is happening because we’re here playing these stupid fucking songs.” Up until recently, no one cared about these songs. I’ve always enjoyed playing them. Now people enjoy watching us play them, which is awesome.
Todd: Tim, how did you join the band?
Tim: Well, I was a roadie and when Big A bailed out, I lived with Fid…
Fid: Can I tell the story?
Tim: You sure can.
Fid: He traveled with us on all our tours and was the de facto fifth member of the band, anyway. When Big A, our old bass player, couldn’t do it anymore, we had some big shows coming up that were pretty important, and it turned out that Tim Burke is a really good bass player. I asked, “Could you fill in for these two shows?” He was like, “Dude, I’ll just be in the band.” I was like, “I thought you didn’t like us.” He said, “Uh, you guys are okay.” So, that’s how Tim Burke joined the band. He was already in the band carrying all our shit anyway.
Todd: So, Tim, how’d it go from okay to superhuman for you?
Tim: Uh, well, watching them is okay, but getting to play along with them is superhuman. Plus, Fid and I are really close. The fact that we get to play together, rules. I enjoy that aspect of it. It’s a good time.
Fid: This is all true. We used to have a really shit bag drummer.
Todd: You?
Fid: Yeah. [Laughter] Turns out that I’m not good at drums. Then when our old guitar player couldn’t do it anymore, we got Mikey to play drums. It turns out that he’s alright at drums. He may or may not have played drums in some bands before. Then I got to play guitar. Mikey is a first take drummer. I just wanted to throw that out there for the world to know. Every song that we record, he does it on the first take.
Mikey: I have a policy.
Lauren: Crazy trivia.
Mikey: I come from jazz. I love jazz. I can’t fucking play jazz or anything. [Laughter] But Miles Davis was recording Kind of Blue, and he said that “the first complete take that we get is going on the record” because that’s where the feeling was.
Fid: That’s some Jackson Pollack shit. There are no mistakes. If he throws paint on the canvas and that’s where it lands, that’s where it’s supposed to go. That’s pretty fucking cool.
Mikey: That’s how I feel. I feel like if I miss a kick drum or I miss a symbol, the feeling was there the whole take because I felt it while I was playing it. If I think about it too much, the feeling goes away.
Todd: You think of someone like Mike Watt who has become very much in demand just because he’s a great bass player and a really affable guy. He knows how to play, regardless of the style.
Mikey: In my realm of understanding, there’s Josh Freese, who’s just this solid, incredible drummer who gets called to do anything. He gets called everyday to drum for all these bands like Nine Inch Nails, A Perfect Circle, Devo, Suicidal Tendencies.
Todd: And his solo stuff is awful.
Mikey: Yeah.
Todd: Needs a little bit of direction.
Fid: So, what you’re saying is that you don’t like Mikey’s solo shit?
Todd: I haven’t heard his solo shit.
Mikey: I don’t have any solo shit…yet. [Laughter]
Vincent: Michael, really quick, what’s up with Psyched To Die? (Mike’s thrash band)
Mikey: We just recorded a 7” (Sterile Walls).
Fid: Which is really excellent, by the way.
Vincent: Everything that I’ve heard from Psyched To Die, which is, like, two songs, is rad.
Fid: Please turn this into a Psyched To Die interview. So, tell me Mike, how is it being up front playing guitar?
Mikey: It’s nice. I get out from behind the drums and play guitar… [Laughter]
[Vincent obviously has a fucked up notion of “really quick” as he tries to ask Mikey more questions not related to Measure [SA]. Vincent is somehow silenced.] 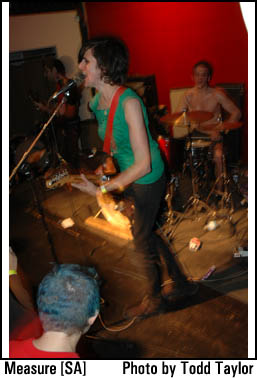